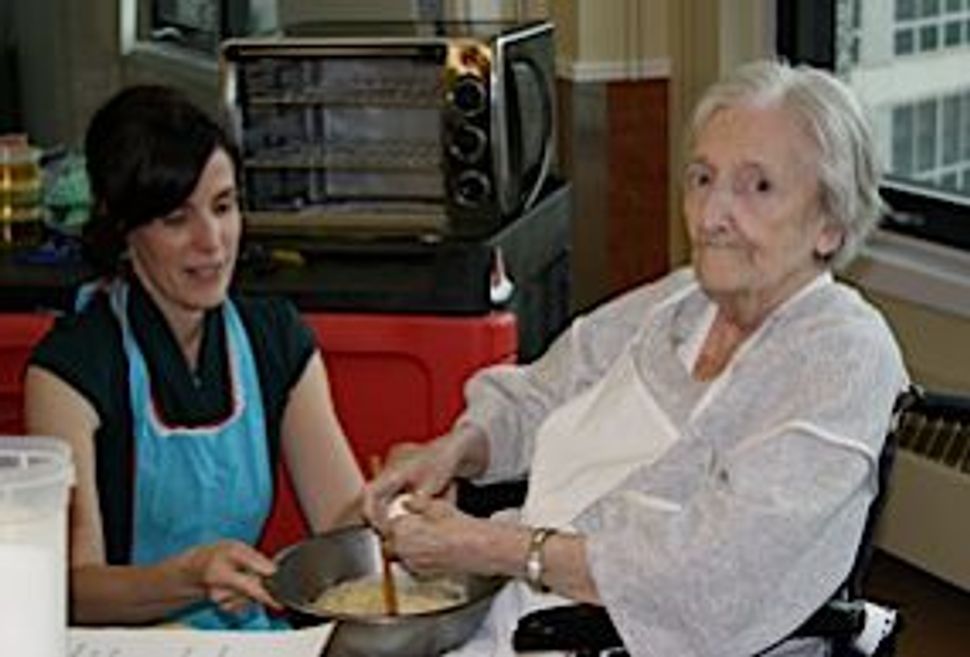 They’re 10 or so women living at a Jewish nursing home in Montreal, neighbors on the sixth floor, who bake together most Tuesday afternoons, coaxing big, sweet aromas from a small convection oven.

“Visitors tell me they can smell [the baking] when they step off the elevator,” says Catherine Drew, a therapeutic recreation specialist, who shepherds the weekly flock of bakers at the Donald Berman Maimonides Geriatric Centre.

It’s just a short walk or wheelchair ride from their rooms to the communal dining area, where Drew, circling among the residents settles in at a long table, distributes large-print recipes and crisp white butcher’s aprons. With ingredients for chocolate chip cookies in easy reach, the women work with practiced hands, cracking eggs, measuring sugar, tipping flour.

“This brings back memories,” says Shirley Levine, 87, stirring cookie dough, having first given a play-by-play of ingredients from the command post of her wheelchair.

Resting the bowl on her lap, Levine has the sticky batter doing “The Twist” under turns of a big wooden spoon. With a final spin, it’s ready to be passed down the table and into several pairs of willing hands for shaping.

Patiently waiting for the bowl to come her way, Ann Aurlick, 101, recalls “doing a lot of baking… honey cake for a nosh when the kids came home from school.”

One by one, the women scoop spoonfuls of the batter flecked with chocolate onto pans slick with margarine. Earlier, Drew had canvassed for a volunteer “to schmear the trays”; an elderly gentlemen who’d joined in that day greased them like a car axle.

Minutes later, a small convection oven breathes hot, rising cookies out into the hallway; still warm, they disappear quickly, accompanied by apple juice and a group discussion about what to make the following week.

Drew knows she’s supervising “balabustas,” former homemakers who can teach her a thing or two about rolling pastry. So she relies on recipes familiar to any Jewish woman who ever owned a Mixmaster: blueberry muffins, apple cake, brownies.

The residents consider several options, including an iced bar cookie featured in a cookbook Drew passes around. “Too much sweetness,” says Levine. A banana cake on the next page looks good, and that settles it.

For this, they’ll need the electric mixer; Claire Goldstein does the honors with the hand-held.

“My mother was a terrific baker and I used to bake, but not like her,” says Goldstein, 84, above the buzz of beaters as she blends crushed fruit into sour cream, sugar and eggs. Done, she suggests the batter is too thick, and Drew obliges with a splash of milk.

“I used to bake rolly-poly [a filled jelly roll] with Turkish Delight and nuts. I’d ask my mother, ‘How do you know how much to put in?’, and she’d say, ‘You put in as much as it takes,’” Goldstein recalls, mimicking “shitn arayn,” the no-measure pouring method of a certain generation of intuitive cooks.

She clearly enjoys this, the alchemy of assembling sweet treats, and remembering, while they’re in the oven, her mother’s legendary pastry. A visitor swoons over the slightly crunchy banana caketops. “That’s where all the flavor is,” Goldstein advises, tucking into a second slice.

Each baker has her preferences and isn’t shy to speak up. “When they make hamantaschen, some like a filling of mon, others like jam inside,” Drew says.

“Baking gives them the feeling of being home again,” Drew continues, washing the utensils as the afternoon winds down, and arranging the clean supplies on a cart.

A mother of three who has picked up a healthy smattering of Yiddish in 12 years at Maimonides, Drew also leads residents in a coffee discussion on Fridays. And wouldn’t you know: they’ve used the old Forverts’ “Bintel Brief” advice columns. After reading a problem aloud, residents offer their counsel, and then compare it to the response in the Forverts. Like baking, there are as many solutions as variations on a recipe.