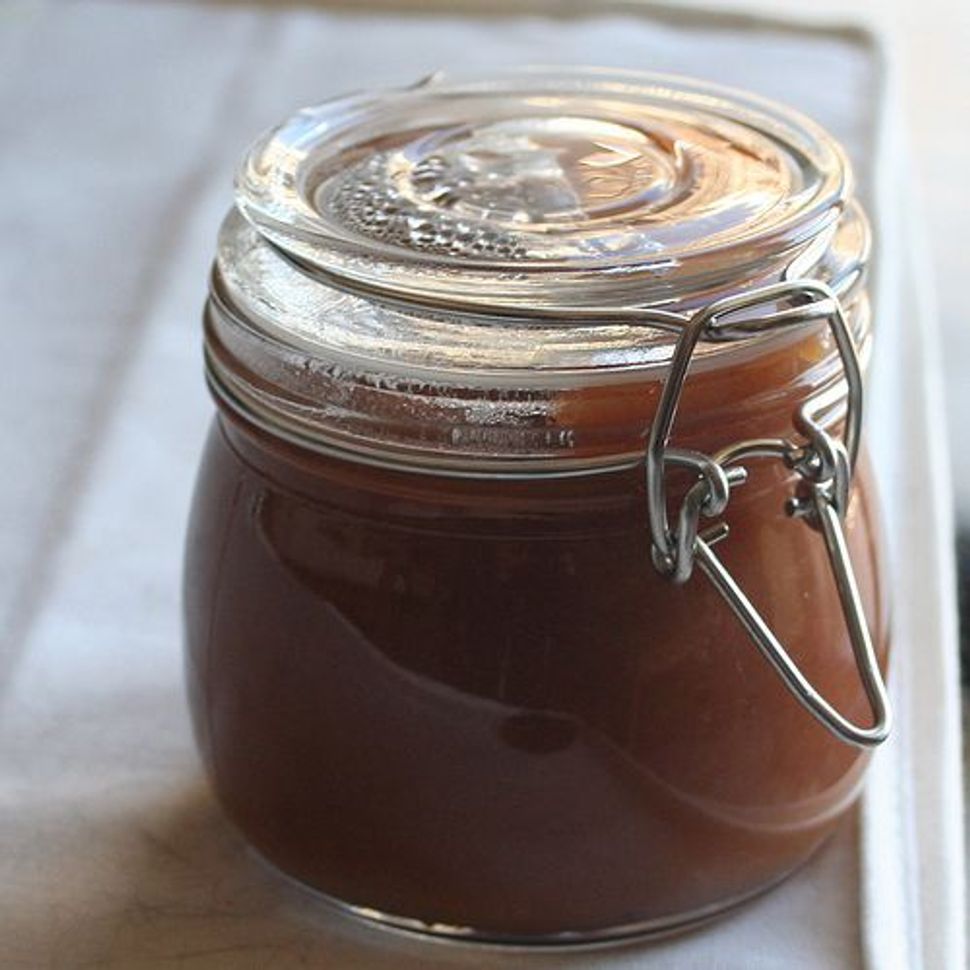 Homemade Apple Butter is a seasonal and healthy treat for your gift baskets Image by Flickr: Whitney In Chicago

Growing up, I remember assembling shalach manot baskets with my mom as part of our synagogue’s Sisterhood tradition. After months of baking, and then freezing, thousands of hamentaschen, we would spend the week leading up to Purim assembling shalach manot packages for families in the synagogue. The shalach manot packages were always the same: two or three brittle, dry hamentaschen, some all-too-salty trail mix, super processed chips or pretzels, and a bottle of grape juice all packaged in a little box that wished people a happy Purim. Though the gestures of these were certainly nice, I have always felt that these mass-produced shalach manot were neither healthy, nor sustainable.

Many people observe the mitzvah of giving shalach manot to friends, family, and neighbors on Purim. This tradition is rooted in Megillah Esther, which tells people to observe the fourteenth and fifteenth days of Adar by “[making] them days of feasting and gladness, and of sending portions one to another, and gifts to the poor (Esther 9:22).” This practice ensures that everyone has food provided for the Purim feast, regardless of economic standing, and serves to contrast Haman’s accusation that strife exists among Jews. Traditionally, shalach manot should be given to at least two people and should include at least two different food items, one of which you should prepare. This removes the burden of preparing food if someone is unable to do so.

Sweeten the pot. Equal Exchange sells fair trade treats (chocolate, coffee, and more) for your shalach manot basket through their Interfaith Program. We also recommend: Chocolove, Dagoba, and Sunspire. Want to get creative? Dip sustainable, dried fruit in some fair trade chocolate. We recommend dried fruit from Negev Nectars. Here’s a recipe for making chocolate dipped dried fruit that allows you to get creative with these homemade treats.

Go nutty! Nuts are a healthy, nourishing snack and can be easily purchased in bulk, which is great for assembling multiple shalach manot packages. Opt for organic, sustainably produced nuts. For a good listing, check out the kosher, organic offerings from Oh! Nuts and Nuts.com.

Brew Peace. Sending shalach manot celebrates the theme of harmony, in the nature of sending gifts to resolve discrepancies among people. Embody this ideal through the purchase of fair trade coffee through the Thanksgiving Coffee Co., which is grown by a collective of Ugandan Jewish, Muslim, and Christian coffee farmers. Or, send the calming effects of tea by choosing from the organic, kosher offerings of Tea Forté. Talk over a cup of coffee or tea to resolve any tensions among friends or family.

Add some color. Tuck in a few beautiful, locally-grown apples, beets, carrots, or other root vegetables in your shalach manot basket, right next to the hamentashen. Spring is right around the corner, so now is the best time to celebrate the winter harvest, one last time.

Sustainable also means taking it easy. Sustainability isn’t just about eating locally, but also about not doing too much work. Instead of making individual servings, try baking a sheet cake or brownies that can be cut up and put in many packages, without a lot of effort. Also, using nuts and dried fruit, you can make trail mix in bulk amounts. Here are some great trail mix recipes, perfect for shalach manot packages.

Make your own! To fulfill the quotient of one prepared item for your shalach manot package, try making your own apple butter! It’s a good way to celebrate the end of the winter harvest. We also recommend this great, vegan hamentaschen recipe.

Go Savory. Purim can be a time of serious sugar overload. Do your friends and family a favor by sharing some non-sweet treats like homemade crackers, wasabi peas, vegetable chips (try making your own kale chips), and even hamentaschen with a savory, mushroom filling.

Have a tip to share? Let us know in the comments how you’re celebrating Purim this year! Get more healthy and sustainable ideas for Purim from Hazon here.

Alyssa Berkowitz is senior in the Joint Program between Columbia University and the Jewish Theological Seminary and is the Food Programs Intern at Hazon.