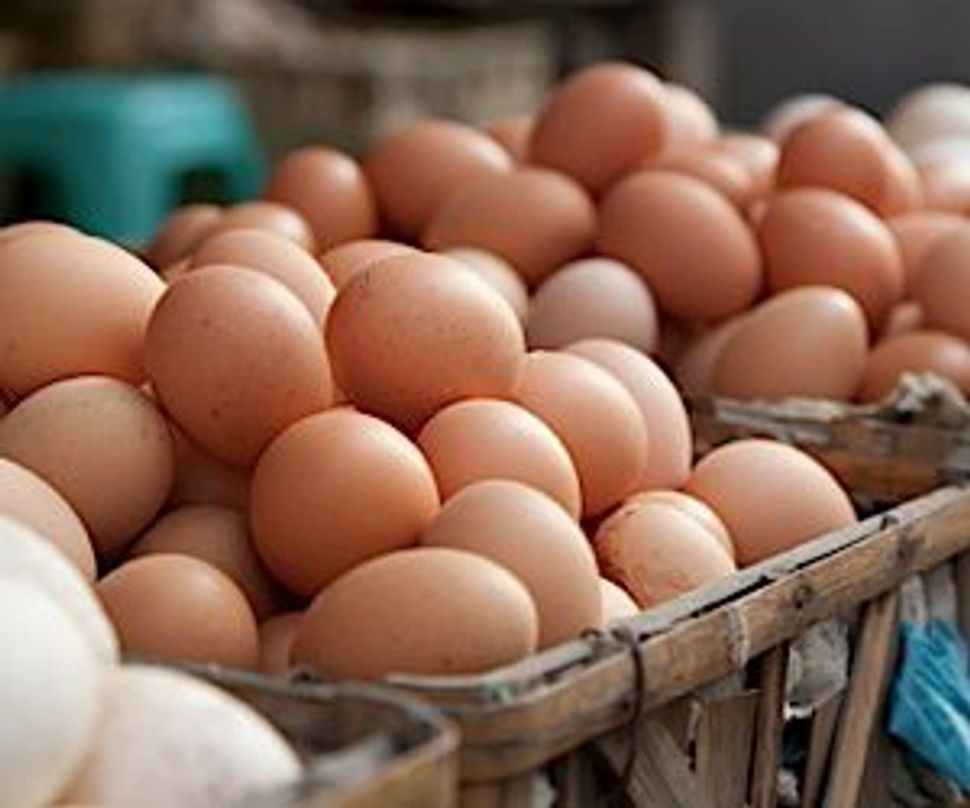 I was making my Passover shopping list the other day when it all came back to me. Eggs! Pesach is about eggs. I had five dozen on my list, and the thought of all those eggs brought back my Passover memories.

Of course, eggs are a symbol of spring, for Christians who color them, roll them on the lawn and hide them from children, and Jews, even pagans. It’s as simple as this: As the days get longer, chickens lay more eggs. We eat what we have. For Jews, that eggs are plentiful around Passover is very fortunate, because eggs can be used as a leavening agent. Some people even make what they call a “Passover roll,” which is nothing more than French pâte a choux, cream puff pastry, using matzo meal instead of flour, and many eggs to get them high and light.

My maternal grandmother lived in the same two-family house that my family did, and I would always help her prepare for Passover. Not only was I her chief kitchen helper but I was also her beast of burden. From about age 8 and well-beyond the time I left the nest at 22, besides kitchen duty, it was my job to schlep her everyday pots and dishes down to the basement, carry her Passover pots and dishes and glasses to her kitchen upstairs, and stash in a basement refrigerator, dozens upon dozens of eggs, cases of eggs, that were delivered to our door in Brooklyn by the “egg man,” from where I do not remember. I’ll bet they weren’t from free-roaming birds.

After the house had been cleaned for the holiday, the cabinets of chometz tied closed and “sold” to a gentile neighbor, and the Passover pots and pans in their place, we started cooking. For her airy walnut sponge cakes, of which we made several, each requiring nine eggs, I shelled and then hand-ground quarts of nuts in a flimsy rotary grater that I still own, although nowadays I use Martha Stewart’s sealed plastic version, in baby blue, instead of my grandmother Elsie Sonkin’s tin one.

I was also in charge of grinding whitefish and pike for Elsie’s famous peppery gefilte fish. That also took a lot of eggs. I did this in a hand-cranked meat grinder clamped to a chair, a bowl on the floor to catch the ground fish. It wasn’t easy. Somehow the fish constantly got stuck, and we’d have to stop and clean it. When her arm got tired, I also was asked to continue chopping the already ground fish with a crescent hockmesser (that I also still have) in a wooden bowl. Now I understand, we were not only making the fish superfine, but working up the protein so it didn’t require any matzo meal filler as cement.

But back to my five dozen eggs. That was only to cook for the two Seders that I was invited to and asked to bring food. I am not cooking, as my grandmother did, for a family of six on all eight days of Passover. I won’t be serving chopped eggs and onions with schmaltz (okay, maybe I will one mid-Passover week night), I won’t be making several orange sponge cakes and multiples of her walnut cake, I won’t be turning the soup chicken into salad with lots of hard-cooked eggs added, I won’t be preparing her egg-rich chopped liver, or her gefilte fish, or the matzo meal pancakes that she made in late afternoon on Seder nights, to “hold us over” because we didn’t “partake of the festive meal,” as most Haggadahs call it, until about 9 p.m. Each batch of those, serving only two or three, takes three eggs.

No one worried about cholesterol or saturated fat until the end of my grandmother’s life, the early 1980s. By then, my grandfather had already died of heart disease, and Elsie was well on her way. But I can’t blame their health problems on eggs. There was so much more to their stories. In fact, until then, eggs were considered the perfect food. It wasn’t until the late 1970s that eggs started to become demonized. Fortunately, lately, eggs are back in the good graces of health professionals and I can enjoy Passover without guilt.

I was originally handed this recipe made with flour. It was too heavy and gluey for my taste, but everyone else seemed to love it. Apples and spice will get them every time. Then one day, it dawned on me that without any leavening – neither baking powder or yeast — this was a Passover recipe originally made with matzo cake meal. Someone had changed it for baking the rest of the year, not that it’s written you can’t use matzo meal in December. I changed it back, and changed the mixing technique to make it a little lighter. Now I love it, and everyone else loves it even more.

Here’s another change from the original: One time, without enough cinnamon in my pantry, I blended together a substitute with the teaspoon or so of cinnamon I did have, plus ground nutmeg, mace, and powdered ginger to fill out the tablespoon measure. Now I make it this way all the time.

2) In a small bowl, mix the topping ingredients together. Set aside.

3) In a medium mixing bowl, with a hand-held or standing electric mixer, beat the eggs until well mixed. Gradually beat in the first 3/4 cup wugar, beating until the mixture is light colored and thick. Beat in the oil, adding it in a steady stream. Scrape down the bowl and beat another few seconds. Add the matzo cake meal and beat to blend well.

4) Pour half of the batter mixture into the prepared pan. Sprinkle about half the topping mixture evenly over the batter. Top with half the apples and all the raisins, if using them.

6) Bake for 1 hour and 15 minutes, or until the sides of the cake pull away very slightly from the baking pan and the topping has begun to caramelize. (A cake-tester may not come out clean due to the moist richness of this cake.)

7) Allow to cool thoroughly for several hours in the baking dish before cutting into serving portions.

To double the recipe, bake in a 9 x 13-inch Pyrex pan. The timing should be the same.

Aurthur Schwartz is the author of “Arthur Schwartz’s Jewish Home Cooking: Yiddish Recipes Revisited,” you can find him at The Food Maven.