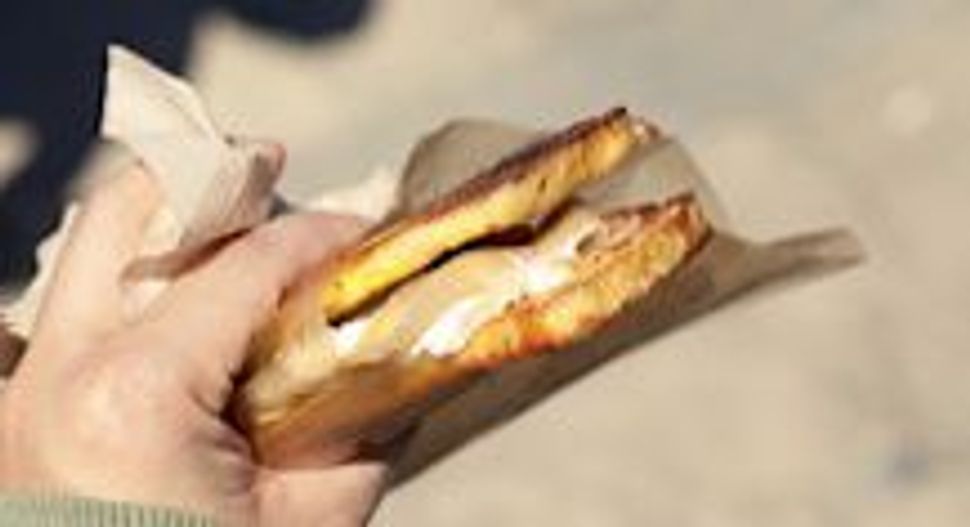 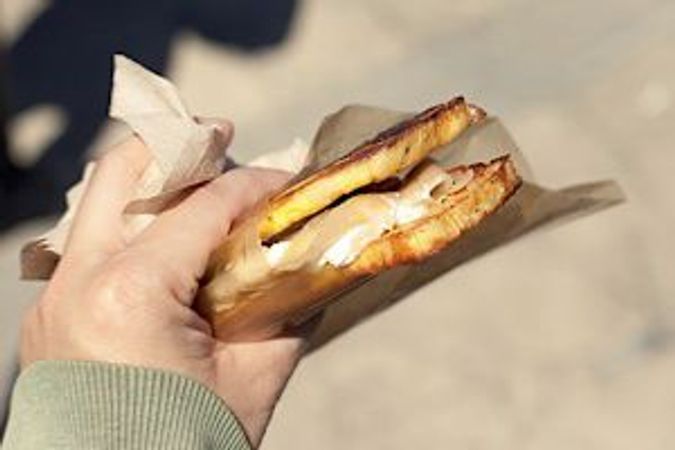 Kugel Double Down: two slices of kugel, pan fried on both sides, and then sandwiched around maple farmers cheese and a slaw of apples and onions. Image by donny tsang

Pioneers of Jewish cuisine have rocked some pretty awesome variations on the sandwich, with staples like knishes and latkes taking the place of bread. This weekend saw the birth of a New York sandwich stand, Scharf & Zoyer (Yiddish for spicy and sour), which adds a slew of wild sandwiches to the Jewish sandwich movement. Most notably, the stand has its own twist on KFC’s Double Down, the Kugel Double Down: two slices of kugel, pan fried on both sides, and then sandwiched around maple farmers cheese and a slaw of apples and onions.

Noah Arenstein, a lawyer with a side job of food blogging and an honorary degree in grandma’s cooking, runs the show. He found inspiration for the Kugel Double Down in the Potato Pave recipe in Thomas Keller’s “Ad Hoc.” The recipe calls for pan-frying slices of a potato casserole, “I thought, you can totally do that with kugel,” said Arenstein, “in my less refined days we’d do it with bacon and cheese.”

Other Scharf & Zoyer offerings draw inspiration from Georgian cuisine, which he learned from a friend who served there with the Peace Corps. Arenstein was interested to learn about the Jewish population in Georgia and has put these influences to use, in addition to flavors from North Africa and Spain.

Arenstein also referenced his days as a history major in college when thinking up the Scharf & Zoyer concept, “reading about the history of Jewish immigration in New York and seeing what used to be on the Lower East Side in terms of dairy — all kinds of farmers cheese — and different breads… it seems prime for a renaissance right now and I want to make people aware of some of these lost classics.” He sources his breads, like pletzl and marble rye, from Chiffon, a kosher bakery in Brooklyn.

Scharf & Zoyer isn’t Arenstein’s first foray into the food biz. Torpedo Palace was a stand that he started last year with baker Ben Burakoff at the Fulton Street Market. For a month they used a portable pizza oven to make what Arenstein describes as “sourdough hot pockets” but were forced to close once Sandy hit. Smorgasburg, the popular New York weekend food fair, was a natural next step for the team, but they didn’t want to use a pizza oven, so they reworked the menu and got a new name. Burakoff eventually left the city for a job in Virginia, so Arenstein undertook the project by himself, scrambling to earn his food handler’s license and dealing with a last minute need for a chef on opening day. Tweeting: “And of course I just lost one of my cooks. Anyone looking to make a little money on Saturday? DM me!”

For now, Scharf & Zoyer is slinging the sammies every Saturday at Williamsburg’s Smorgasburg, but Arenstein is looking to expand the menu and locations. “The other thing I’m going to add is the gefilte filet-o-fish. It’s what it sounds like… a matzo meal crusted fried gefilte fish patty, with a horseradish and pickle mayo and a carrot slaw on a potato roll,” he said. He’ll also add more spreads, like whitefish salad and chopped liver, to “keep things on the lighter side.”