Jamie Geller’s New Show Gives Us a Taste of Israel 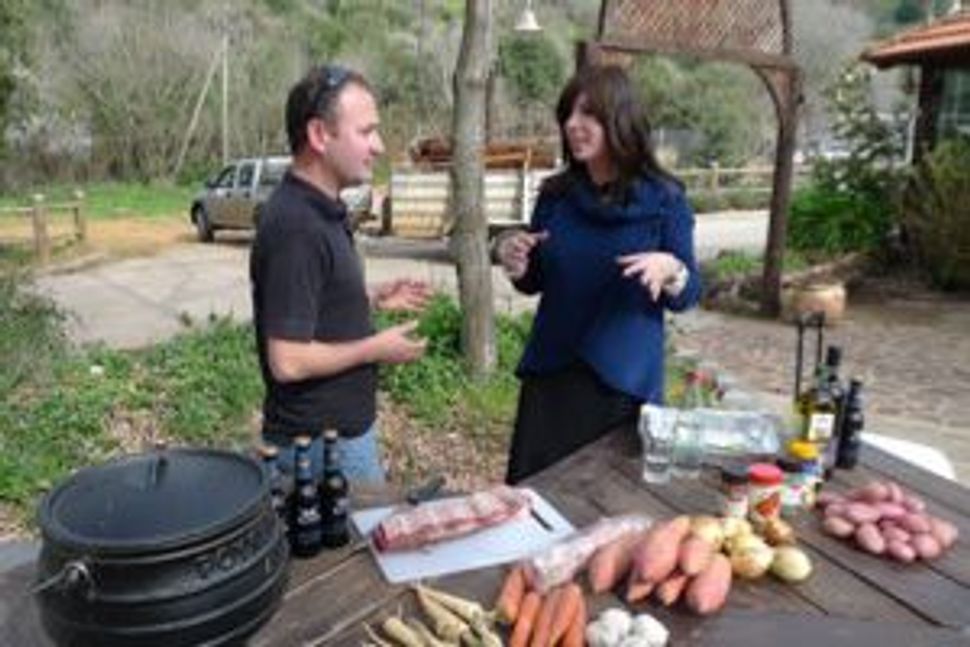 Jamie Geller, often dubbed the “Kosher Rachel Ray,” is the first to admit that making aliyah was a challenge. But nine months in she’s saying “what took me so long?!” Geller captured her family’s trials, tribulations, and successes of moving to Israel last August in the documentary series “Joy of Aliyah.” Based on the success of her first program, Geller has teamed up once again with Nefesh B’Nefesh and new partner 12 Tribe Films to create a food and travel show, “Joy of Israel with Jamie Geller,” that follows her family on culinary adventures around the country.

“Even before the dream of aliyah was born,” says Geller, “I wanted to do a food and travel show set in Israel.” Inspired by programs like Jean-Georges and Marja Vongerichten’s Korean food and travel show “Kimchi Chronicles,” Geller says that her connection to Israel is what makes “Joy of Israel” more than your average travel program. “The real mission of the show,” explains Geller, “is to be a food and travel show with the backbone of this family that just made aliyah — so through the eyes of new olim [immigrants] and the excitement and emotion that goes with that.”

Check out the first episode below

While Geller and her family will hit some of the usual spots, like Jerusalem’s Old City and Masada, she’s more interested in exposing new and different places to visit in Israel. “I want to show people something that they’ve never seen,” she says.

In the first episode took place in the Golan Heights, where the Gellers went sledding on snowy Mount Hermon — certainly not an activity that most associate with Israel. Next they visited an Israeli cowboy ranch, where they rode horses and prepared a slow-cooked poyke stew over a campfire. Later in the season, they’ll visit and cook at a Bedouin camp, a Biblical village, an organic farm, and an IDF base. Geller says she is always looking for recommendations of new places to check out, and encourages viewers to send in their favorite off-the-beaten-path spots in Israel.

While the premier was a double episode in which they visited two locations, most episodes will be a brief 5 to 7 minutes and will center around one place. After seeing the sites, Geller will cook food representative of the place in her characteristically accessible style. While preparing poyke in the first episode, Geller says, “I love flexible, easy cooking that you can’t mess up.” She and the chef demonstrate what they’ll put in the stew and how to make it, but don’t provide an exact recipe since it’s the sort of thing where “anything you have in the kitchen goes in it,” they say.

The series will air the first Tuesday of every month on YouTube, Joy of Kosher and several other websites. While Geller originally had her sights set on an hour-long PBS special, she found that financing a show like that can be tricky. Funding shorter webisodes “is much more reasonable.”

Joy of Israel of course comes off as a promo for Israel, but one that works. After watching the fun that she and her family have in the first episode, it’s hard not to want to follow in their footsteps and head straight to the Golan. But Geller doesn’t gloss over the realities of moving to Israel and traveling with five children; the first episode starts with her not understanding Hebrew words in her daughter’s homework and struggling to keep her kids in the seats of her minivan.

Besides showing viewers the beauty of Israel, Joy of Israel also provides Geller with the perfect motivation to go on outings with her family. As much as she loves living in Israel, Geller says that it’s easy to get lost in the nitty gritty of adjusting to life in a new country. “Even in everyday life in New York you get lost, and even more so here,” she reflects. “Before we even decided to do the show we said we wanted to do a family trip once a month and now it’s a great excuse.”

Jamie Geller’s New Show Gives Us a Taste of Israel