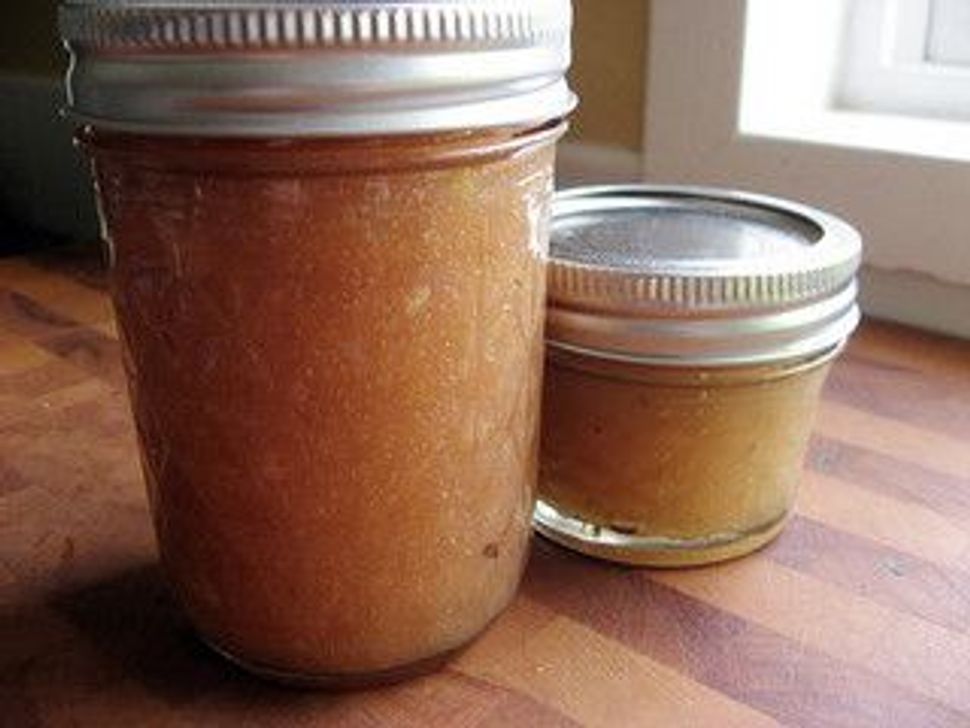 Before my blood ran Michigan maize and blue, I would not be surprised if it were apple cider for 4 months out of the year. Beginning every Labor Day weekend and lasting through Thanksgiving, my neighborhood mill has churned out the best cider one could hope for—pure, unadulterated, unpasteurized, unfiltered, fresh, and preservative-free.

As far back as the photo albums go, there are pictures of my brothers and me sitting on a stoop at the Franklin Cider Mill drinking cider. Each time the fall albums come out, we remember our annual treks to be the year’s first customers every year and of the apple press and fresh cinnamon spice doughnuts, beckoning us to head over for just one more… or maybe it is the tashlikh ceremony that we used to hold during the 10-days where our parents reward us with delicious and fresh doughnuts when we cast our stale-bread sins into the river.

Autumn is my favorite season. Growing up in Metropolitan Detroit surrounded by all manner of deciduous trees, I am always amazed with the burst of color every year. And with the blazing canopy comes all manner of great fall fruits, holidays, and a crisp in the air. Not to mention that my community allows its residents to burn their leaves…I am always on sensory overdrive during this season.

One of the most difficult times in my life was my first fall away from home. I was in Israel for nine months on a gap-year program and was seriously homesick for my fall colors, cranberries, and most importantly, apple cider. It was rough.

The apple crop in Israel does not compare to that of Michigan, or many places in North America. So when I returned to the States and began school—away from my beloved cider mill—I realized I had to come to terms with my limited cider access.

While I live in Ann Arbor, which is known as “Tree City” and is encircled by cider mills and apple orchards, I still face the fact that these are not my cider mill. Sure, the stuff they sell at the Farmer’s Market is not bad. And the doughnuts can be quite enjoyable, but it still pales to the flavors of my youth.

Which is why I had to come up with something that would allow me to enjoy the flavor of Franklin Cider all season (and spoiler alert: all year too!). I don’t know exactly how I decided upon it—maybe I forgot about a pot of hot cider or maybe I was hoping for a cider glaze for some sweets—but at some point in the fall of 2009, l made my first batch of apple cider syrup.

This is my favorite (sweet) condiment. Not only can I use it on anything, but also, every time I use it, I get a sweet pang of nostalgia—of the fall harvest, of cider mill trips with my family, and of great meals gone by.

This week begins Rosh Hashanah and the month of Tishrei, a time when Jews come together as family and community to wish each other “a sweet new year” of blessings. Traditionally, we celebrate with apples and honey, a combination of the first fruits of this New Year and a touch of additional sweetness to start our year off in good spirits. Many of us then keep this tradition alive for the next four weeks as we continue to bless our challah with honey—not the standard salt—as further inducement for this sweet and good year.

But before you reach for your jar of honey, I recommend going on a trip to a cider mill. Most mills and orchards are open on Labor Day and happily dispensing the first fruit (and ciders) of the season. And if you don’t have a cider mill nearby, try the farmer’s market, or a produce stand, they will be happy to help you find heaven.

Below is a recipe for cider syrup that I have been using for the past three years. It is incredibly easy to make, and even easier to use. Use it instead of honey for dipping, instead of maple syrup in any recipe, or as a sweet contrast to a strong spice—you can’t go wrong.

May you have a sweet and happy new year filled with boundless joy, bushels of laughter, and a bounty of apples.

Pour the gallon of cider into a pot and set over medium heat until it just begins to boil. Boil until the syrup is reduced to 2 cups, or 80% of original volume. Remove from heat and store in a clean container (glass is best).

Cider syrup can stay for over a year when stored in an airtight container in a refrigerator…but it’s so good that it probably won’t last past winter.

If you want to flavor your syrup with some lemon rind or a cinnamon stick, it will probably be quite good. I’m too far in love with the regular syrup to mess around with it.

Note: a gallon of cider should leave you with about 2 cups of syrup. So however much you are starting with, expect it to reduce by about 80%.

Avery Robinson, a graduate student at the University of Michigan, is currently researching Jewish American culinary history. He is currently curating an exhibit “American Foodways” the Jewish Contribution,” that will be in UofM’s Hatcher Graduate Library from August 30 – December 8.