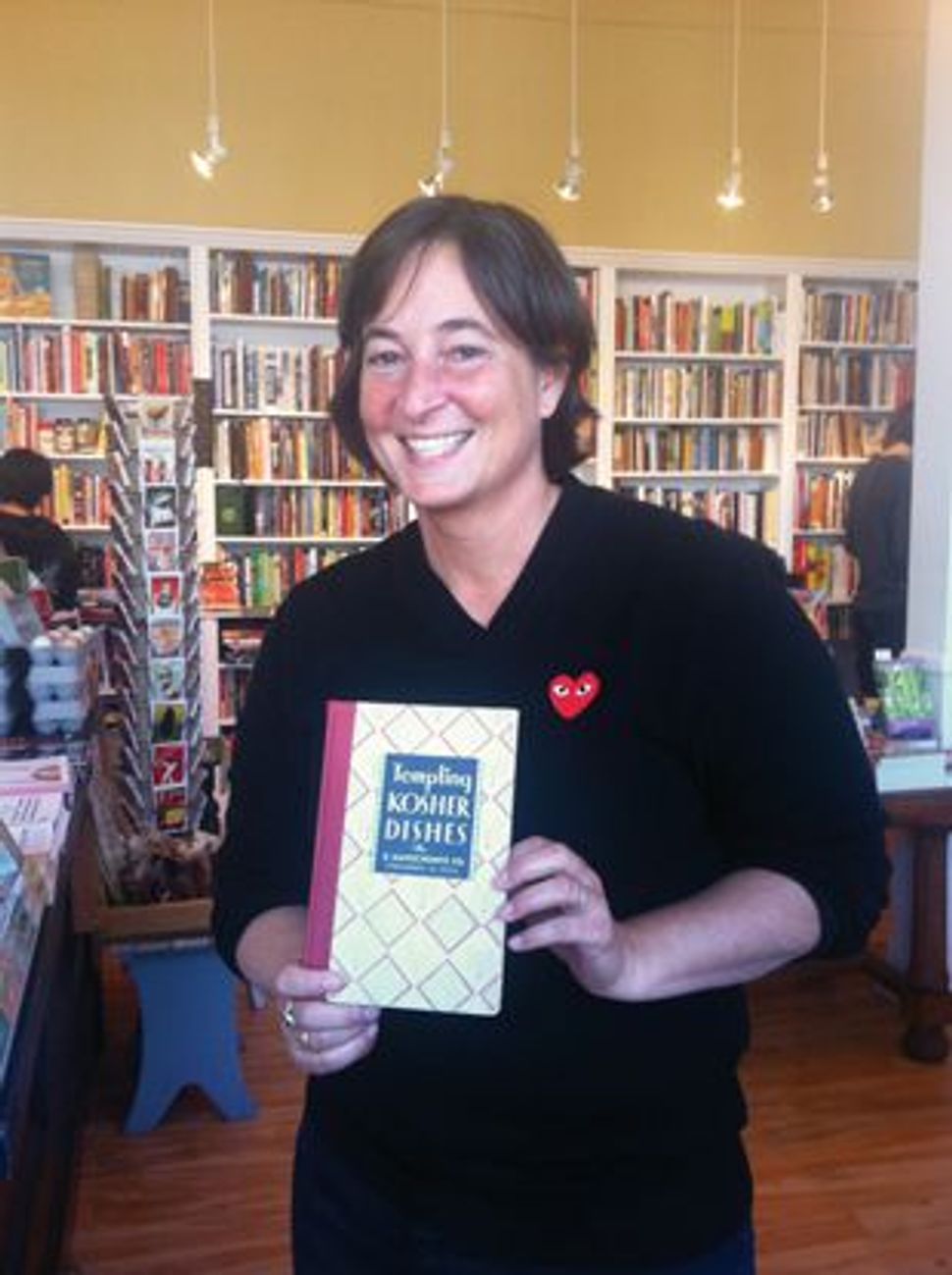 Celia Sack with one of her new acquisitions, a 1930 edition featuring chocolate ?wine cake? and cheese balls. Image by emma silvers

This piece first appeared at JWeekly.com.

Looking for cooking tips from Victorian England, or information on the history of organic farming in Asia? How about a 100-year-old guide to understanding spices? Or perhaps you’re just trying to replicate your grandmother’s famous homemade kreplach?

Celia Sack has got you covered. At Omnivore Books on Food, a deceptively small shop in San Francisco’s Noe Valley, the floor-to-ceiling bookshelves are overflowing with the culinary wisdom of the ages, from every part of the globe. Yes, some of the cookbooks are more than a century old. No, you should not feel apprehensive about thumbing through them.

“I have an M.O. for my store that’s based on being welcoming and accessible,” says Sack, a San Francisco native, seated on a wooden stool in a corner of her store. “Because when I was a young collector, I felt like a lot of antiquarian bookstores and dealers were very discouraging. They didn’t want you to look behind the counter, they didn’t want you to touch anything, they didn’t trust you to handle anything.”

Sack, who is Jewish, has been collecting vintage and antiquarian cookbooks since her early 20s — she was influenced by a girlfriend who ran a now-closed bookstore on Clement Street, an internship at the auction house Christie’s while she was in college in New York, and her work at a rare-book auction gallery. For her, getting newbies interested in collecting is half the fun.

“I love watching people get excited about books. Their excitement of discovery reflects my own, so it makes me really happy to see it,” she says, referring to her modestly priced antique books (many in the $30 to $70 range) as a “gateway drug” that often gets customers interested in collecting more seriously.

Organized by theme and subject, the shop features a sizable Jewish and Israeli cuisine section, including “Jerusalem,” the much buzzed-about tome of gourmet Middle Eastern cuisine by chefs Yotam Ottolenghi and Sami Tamimi. The book has been a bestseller since its publication last October.

Another of Sack’s recent favorite acquisitions in that section is pretty different: a 1930 edition of “Tempting Kosher Dishes,” published by the Manischewitz company, featuring recipes like matzah dumplings, chocolate “wine cake” and cheese balls … made with matzah meal, of course.

At a time when independent bookstores are struggling, and many home chefs are more likely to turn to the Internet than a cookbook for a recipe, Sack says her store has been successful because a cookbook provides an experience that recipe blogs simply can’t reproduce. “My partner, Paula, has a great way of putting it: Having a single recipe rather than a whole cookbook is like having one song on your iPod shuffle rather than a whole album,” she says.

“Somebody’s curated that whole album or that whole book to be a collection that all makes sense together. And with a blog, it’s often just one person [writing] … With a cookbook, you have writers, editors, ideally multiple people testing the recipes. The best cookbooks also kind of build on themselves, starting with a foundation and getting more complex as you go.”

The couple also own the pet shop adjacent to the store; it’s been there 14 years to the bookstore’s five. But the success of Omnivore Books speaks to the audience that’s clearly still out there for cookbooks, new and vintage: On a recent Friday afternoon, the cozy shop always had at least a few customers browsing. Sack says her clientele includes chefs (Alice Waters is a fan), amateur foodies, tourists and even a couple of A-list celebrities who buy from Sack online.

It helps to have a jam-packed schedule of interactive events and author appearances, with the evening’s offerings announced on a “Menu du Jour” chalkboard outside the store. Regular cooking competitions — Sack is partial to pie contests — often see customers spilling out onto the sidewalk and down the street. The competitions are free for contestants, and $5 for those who just want to taste all the entries; winners are chosen by anonymous vote and split the door money with the store as a prize.

At a recent contest, Sack momentarily panicked when a couple of police officers walked up. “I thought they were going to tell us the crowd had gotten too big, and I asked if we were blocking sidewalk traffic or something,” she recalls. “Then one of them goes, ‘No, I baked a sweet potato pie!’ And it was a really good pie! We have pictures of him holding the empty pie plate and talking to kids.”