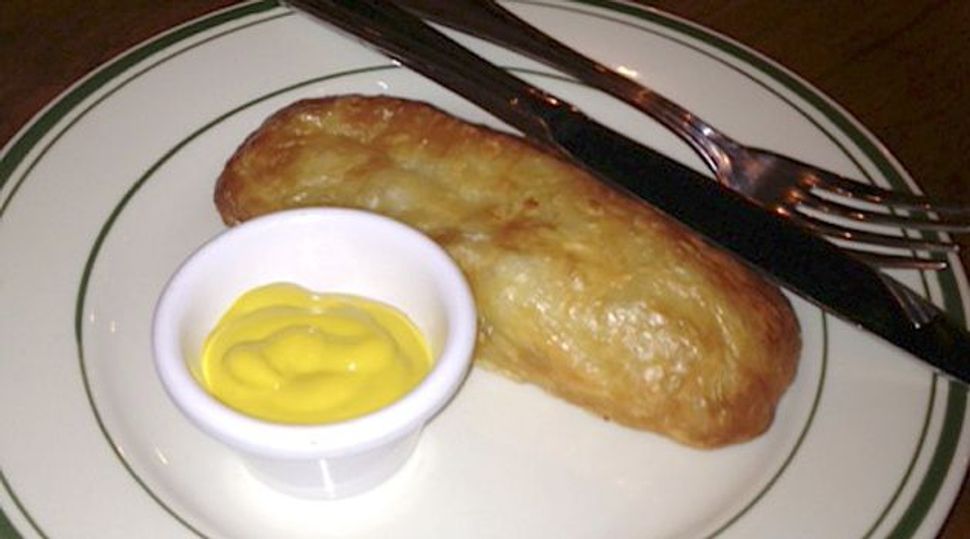 Cronut fever has swept New York City (and the globe), but the Cr’nish, a croissant-knish hybrid may give that croissant-doughnut hybrid a run for its money.

The savory pastry — filled with potato, caramelized onion and Portuguese sea salt — is available for $4 at the bakery at Bubby’s High Line, and is served alongside homemade spicy mustard. The pastry exterior is light and buttery, and the potato inside the perfect creamy consistency you look for in a knish. The sea salt also makes it rather salty (in a good way). The only thing we can possibly find to critique is that we’d like a bit stronger caramelized onion taste. Hardly a takedown, huh?

The pastry is the brainchild of Ron Silver, who opened his third location of Bubby’s last month. Silver admits that he’s never had a cronut. “I don’t think I could eat one — I’d die,” he said. He wanted to experiment with a knish at his new restaurant — which specializes in American comfort food — and knowing that they already had a great croissant dough, he thought, why not.

The pastry has been popular at the restaurant’s to-go bakery. A manager told us he was selling about 20 a day.

And Silver says he plans to experiment with other types of knishes, including pastrami and even (gasp!) pulled pork.

Asked whether he planned the knish in response to the fried knish shortage that was brought on by a fire at Gabila’s, Silver said it was just a coincidence… if a lucky one for him. “That was just an opening created by God,” he joked.