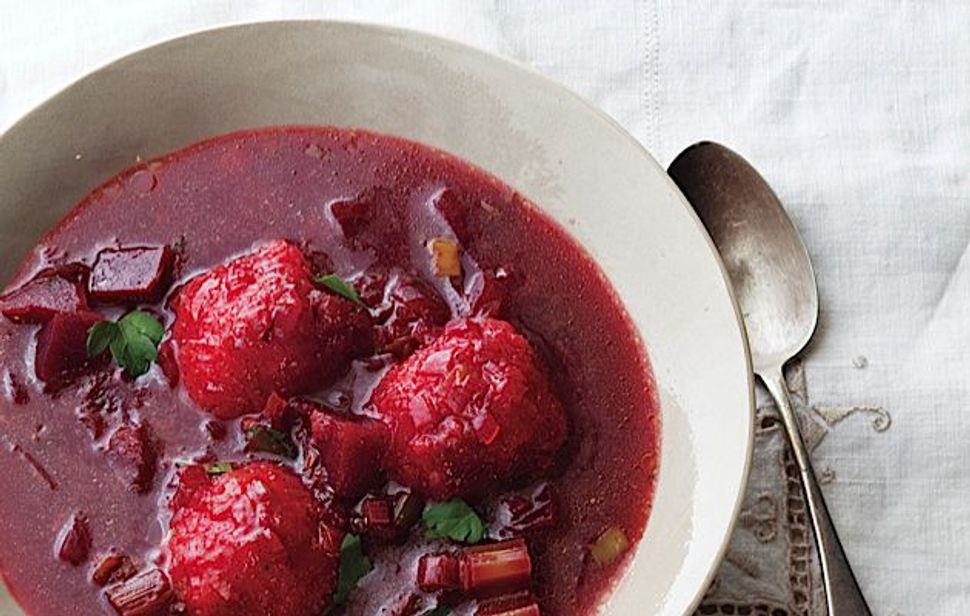 Part of me wants me to call it Iraqi borscht, but that wouldn’t do it justice, and I’m afraid the name would create too many misconceptions. This soup is tangy, thanks to beets and lemon being boiled together into a broth. My recipe uses a combination of rice flour and semolina instead of plain semolina, which is harder to find in the United States. I worry that this recipe won’t be around in two generations—I don’t know anyone except my sister, me, and a handful of Iraqi grandmothers who still make it. I’m relying on you to carry on the tradition!

For the Soup Base
Heat the olive and canola oils in a large pot, add the onion, and sauté until golden brown, about 15 minutes. Add the leek and celery and cook until soft, about 7 minutes. Add the beets, salt, cumin, and pepper. Cook for another 3 minutes, then add the cold water and lemon juice. Stir in the sugar until thoroughly mixed and bring to a boil. Lower the heat and simmer for 45 minutes.

To assemble the kibbeh, moisten your hands with a little water, then place a heaping spoonful of the semolina mixture in the palm of your hand. Shape it into a flat disk, then drop a full tablespoonful of meat into the middle. Carefully wrap the semolina flour around the meat mixture—it should be about the size of a golf ball.

To Finish
Gently place the kibbeh in the simmering soup and cook for another 20 minutes.