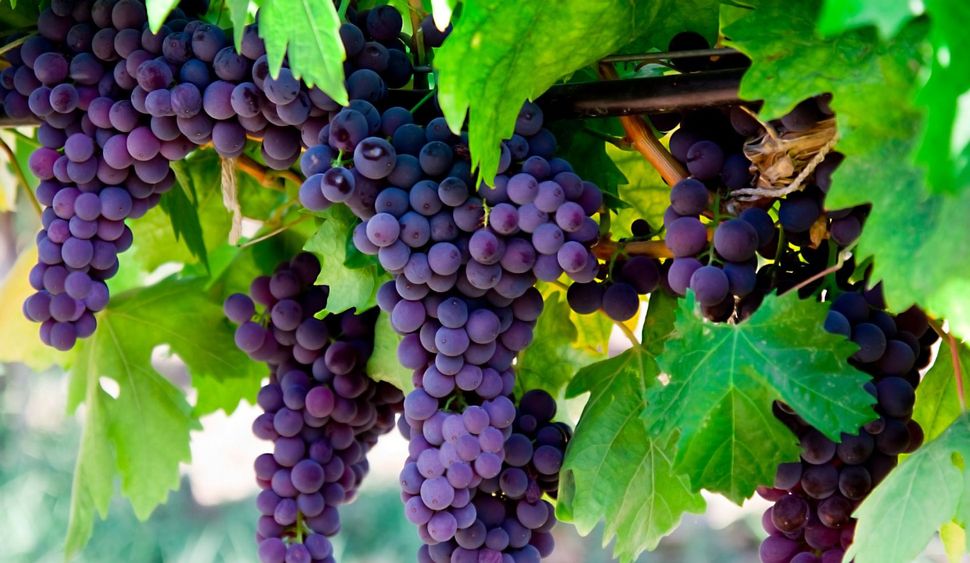 If there is one sentence in the Tanach that makes me yearn for summer, it is, “But they shall sit every man under his vine and under his fig tree; and none shall make them afraid: for the mouth of the Lord of hosts hath spoken it.” [Micah 4:4] In my mind’s eye is a picture of rows and rows of green on rolling hills, each vine bursting with sweet and juicy grapes.

That verse is just one of many biblical references to the grape vine. In fact, no plant is mentioned more in the Tanach than the grape and its products, and the vine and its fruit are used metaphorically throughout its teachings.

“A land flowing with milk and honey” may have been the first prediction of what would later become our homeland, but the Torah gives another description. When Moses sent twelve scouts to spy out the Promised Land, they brought back with them from the Valley of Eshkol samples of the fruit grown there, so weighty that it took two men to carry it on a pole. This iconic image depicting the plenty of the land appears on numerous artifacts, from ancient coins to modern postage stamps.

The history of the grape is as old as the history of humankind, hunter-gatherers probably being the first to enjoy the wild fruit. The climbing shrub probably originated in Mesopotamia as early as 6,000 BCE. From there, the vinifera grape spread eastward to Phoenicia and Egypt, where it was pictured in hieroglyphics in ancient burial tombs. And by 2,000 BCE, Phoenician sailors were carrying grapevines across the Mediterranean to Greece and beyond. Ancient Greek and Roman civilizations revered grapes for their use in winemaking.

Grapes didn’t remain wild for long. As agriculture became more sophisticated, so did cultivation of varieties of grapes and their uses. Soon there were “table” grapes grown for eating, raisin grapes for drying and of course the many varieties of wine grapes, all in a wide range of colors.

When pioneers settled in America in the early 17th century, they brought with them young shoots of grapevines. They first attempted to plant in New Mexico, but later found California to be the most suitable region for grape cultivation. The latter now produces all the raisins and about 90% of the wine made in America, although New York State, Michigan, and Washington State also support significant grape production.

Although Israel has a long history of winemaking, the country does not have its own indigenous grape varieties. When the Ottomans controlled Palestine, they only permitted the planting of vineyards to produce food grapes, so many local grape varieties disappeared for hundreds of years. The renewal of commercial winemaking in Israel came about in the years of the First Aliyah, from 1881-1903. Prior to that, home-based winemaking supplied sacramental wines for the religious Jewish and Christian communities. The Templars, Christian pilgrims from Germany, were actively involved in planting vineyards, using German grape varieties.

The first Jewish agricultural experience in viniculture was at the Mikveh Israel Agricultural School, but the Israeli wine industry got a huge boost from Baron Edmond de Rothschild. On his first visit to Palestine in 1887, he decided to launch a serious wine growing enterprise, and hired Gerard Ermens, a renowned French agronomist, to supervise viniculture in Palestine for all the Rothschild-sponsored communities. Serious wine production then began in in Rishon Le Zion, Zichron Ya’acov, Petach Tikvah and Rosh Pina, among other places.

In the last three decades, the range of both wine grape varieties and wineries in Israel has expanded dramatically, and Israeli wines have earned many awards. Viniculture has become such an important part of the Israeli economy that the Meir Shefaya Youth Aliyah village teaches it to its students, who manage every step of the wine producing and marketing process, from grape harvesting through label design.

Although commercial grape production dates back thousands of years, it wasn’t until 1854 that America got into the game, when Ephraim Wales Bull developed the Concord variety. He named it after the Massachusetts village where he cultivated it specifically to withstand the cold New England winters and its rocky soil. American Jews are familiar with this variety of grape not just through its use in grape jelly, but as the basis of sweet sacramental wine; Manischewitz and Mogen David probably ring a bell with many readers of a certain age.

What makes the grapevine unique among fruits is that its leaves are also edible, and nowhere more deliciously than in stuffed grape leaves. Ancient Greek legend claims that the origin of the dish goes back to the time when Alexander the Great besieged Thebes. Food became so scarce that the Thebans cut what little meat they had into bits and rolled it in grape leaves.

Recipes for stuffed grape leaves vary by country. Those of Greece, called dolmades, are filled with minced lamb, rice and herbs such as mint, parsley or dill. When served as a main dish, they are covered with an egg-lemon sauce. In Turkey and in Iran, their filling is usually more rice than meat, as well as pine nuts and currants.

So, next time you pick up a bunch of grapes or sip a nice chilled glass of chardonnay, savor it in the knowledge that you are enjoying the results of millennia of labor.