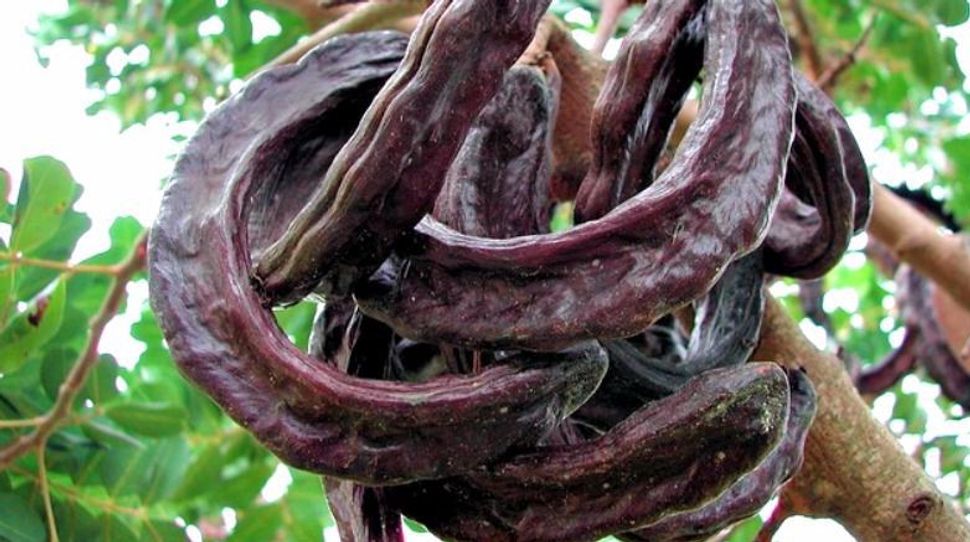 Carob is mentioned many times in Rabbinic literature, and the custom of eating carob on Tu B’Shvat is specifically mentioned in the Talmud.

One of the most potent memories I have of Hebrew School (other than the time I got into trouble for setting the clock ahead) was our celebration of Tu B’Shvat. In addition to pasting the leaf-shaped stamps on our Jewish National Fund tree poster, I loved feasting on the dried fruits and nuts that, we were told, came from the Land of Israel itself. Even if the fruits hadn’t been delicious, the notion of their having traveled over the ocean to our little school (and carried on camelback to the port?) was the ultimate of the exotic to my child’s mind.

And, although we never saw it in our Hebrew School, my mother spoke fondly of something called bokser, which I later learned was the carob bean pod, also known as locust bean or St. John’s Bread. It got the latter name due to Christian tradition that holds that St. John the Baptist subsisted on the pods in the wilderness.

The Yiddish bokser is a corruption of the German bocks’horn, or ram’s horn. Readily available in Israel (it’s called haruv in Hebrew) by simply picking neighborhood trees found throughout the country, the hard-as-leather pods my mom remembered were a treat for kids and, I imagine, a boon for dentists, as they resemble the ram’s horn not only in shape; they are hard as a rock.

Archaeological evidence indicates that the carob bean has been used as food for thousands of years, and for much of that time it has been considered a poor man’s food. During World War II, the people of Malta commonly reported eating dried carob pods as a supplement to their food rations.

While the carob may have been used as a source of nutrition for the poor, it also proved valuable to the well off. Its seeds are so consistent in size and weight that they were the original gauge of the carat measure used by jewelers.

Surprisingly, although the tree and its curved brown seed pods are native to Israel, there is no reference to them at all in the Tanach. However, the fruit is mentioned many times in rabbinic literature, and the custom of eating carob on Tu B’Shvat is specifically mentioned in the Talmud.

But why eat the carob on Tu B’Shvat? Jews in Eastern Europe wanting to celebrate the holiday with something from the motherland found that it was the only fruit that could travel from the Middle East to Europe without spoiling. Why my mother had it in New England in the early part of the 20th Century most likely was a remnant of her parents’ Eastern European customs. 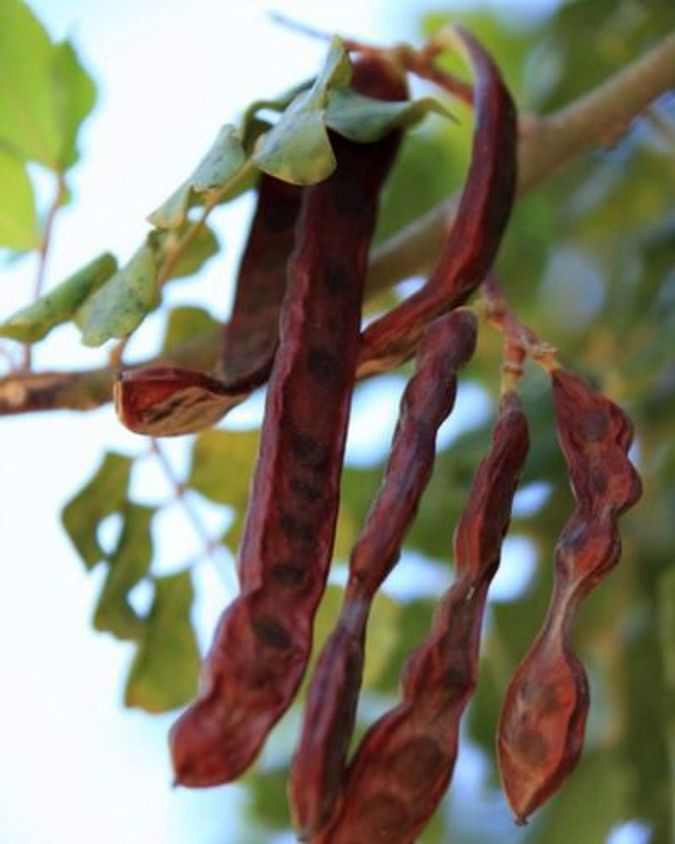 That people are able to subsist on the carob is due to its excellent nutritional value. The lowly bean has protein, magnesium, calcium, iron and a host of other vitamins and minerals. It also contains just one-third the calories of chocolate, and is virtually free of fat.

Locust bean gum is routinely used as a thickener in dairy products such as ice cream due to its ability to prevent the growth of ice crystals. It also has other practical uses such as the production of cosmetic facemasks, fodder for livestock and firewood.And if you happen to catch a bug from one of your in-house bug factories (aka children), the carob is also good for treating coughs and gastrointestinal ailments.

The carob tree is known for its exceedingly long life; Italy boasts one well over 200 years, and many others in the Mediterranean are over 100 years old. This longevity, and the length of time before fruiting, gave birth to what is arguably one of the most famous legends in Jewish literature. Here is a version of the story as told by Peninnah Schram:

One day, Honi the Circle Maker was walking on the road and saw a man planting a carob tree. Honi asked the man, “How long will it take for this tree to bear fruit?” The man replied, “Seventy years.”

Honi then asked the man, “And do you think you will live another seventy years and eat the fruit of this tree?”

The man answered, “Perhaps not. However, when I was born into this world, I found many carob trees planted by my father and grandfather. Just as they planted trees for me, I am planting trees for my children and grandchildren so they will be able to eat the fruit of these trees.”

A little off the carob track, who was this Honi? And what is a circle maker? This real man was a 1st-Century BCE sage who is credited with a miracle. The winter rains failed to come to the Land of Israel, so Honi drew a circle in the dust and stepped inside it. (So there you have it. A circle maker draws circles.) He told God that he would remain inside the circle until God would provide rain. When a drizzle started, Honi wasn’t satisfied. He insisted on more rain, so God send a deluge. Honi then demanded a calmer downpour, which God then sent, thereby bringing an end to the drought.

Next time you’re in Israel, take a drive up to the Galilee. Just a few minutes from Rosh Pina is Hazor HaGlilit, where you can visit Honi’s tomb. And while there you can pick your own carob beans from the trees that grow nearby.

Carob is touted as a healthy alternative to chocolate, as it has lots of healthful nutrients and no stimulants such as caffeine or theobromine to give you the jitters. However, the bean has long been denigrated as an inferior chocolate wanna-be, nothing more than a poseur. This delicious cake redeems the lowly bokser and is so moist it doesn’t require frosting, but including it doubles the pleasure.

3) In the bowl of an electric mixer, combine first five ingredients. In a second bowl, mix the oil, milk and eggs.

5) Bake for 30 minutes or until toothpick placed in center comes out dry. Cool for 20 minutes, then tip cakes onto cake racks.

6) Meanwhile, for the icing: In bowl of mixer, beat butter until creamy. Gradually add confectioners’ sugar with mixer set to slow speed so that it won’t fly all over the kitchen. Add extract and milk. Increase speed to whip icing to a nice, fluffy texture.

7) When cakes are completely cooled, ice them and either stack or serve separately.