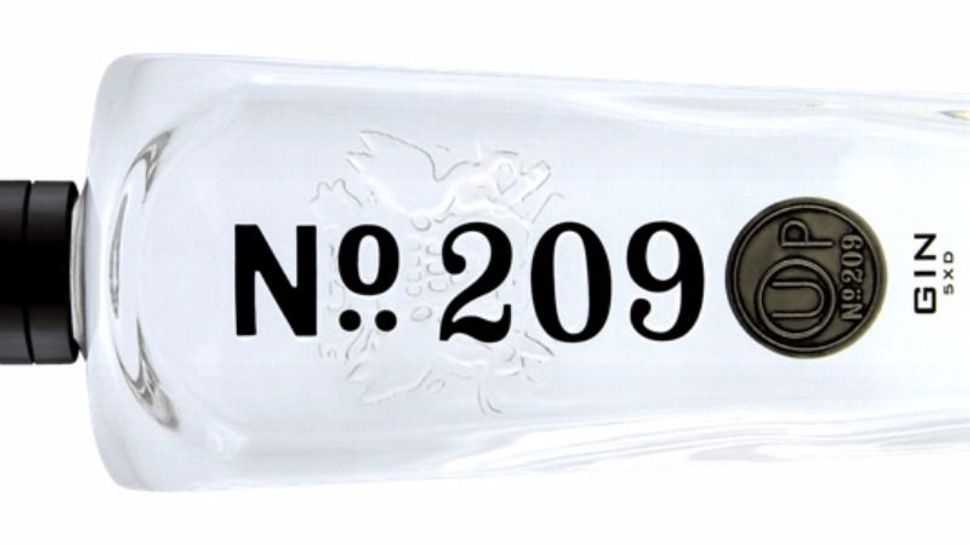 The base spirit of this kosher-for-Passover gin is sugarcane.

A few days ago, we shared some of our favorite new cookbooks and haggadot, any of which would make fine Passover gifts.

Today, we have ideas for the kitchen, pantry and table.

Our main tip is that if you want to give your hosts something edible or potable, make sure you know their dietary restrictions and traditions. Is their household strict about observing kosher-for-Passover rules? Does your host eat kitniyot (corn, rice, legumes, and seeds)?

Another rule of thumb when bringing an edible offering: Don’t expect your host to serve it with the Seder meal. (This holds true when bringing wine to any dinner party.) The host has worked hard to pull together a cohesive dinner, and you don’t want to throw that off. (They might appreciate the gift that much more if they don’t have to share the treat with their guests!)

No one needs another box of standard matzo, but how about something artisanal that defies the moniker “bread of affliction?” 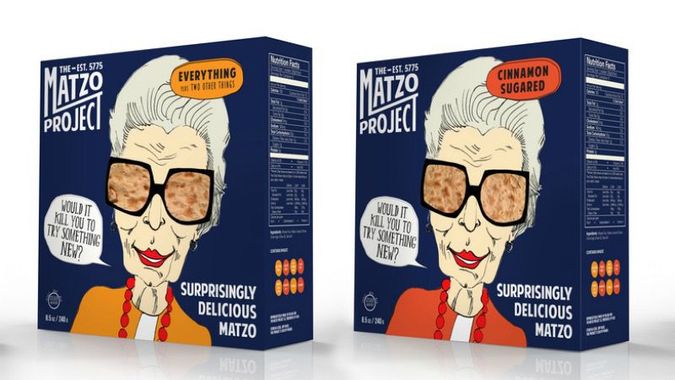 On one end of the spectrum is The Matzo Project. Founded by two friend who met at camp thirty-ish years ago, this company aims to remove matzo from the kosher aisle and place it squarely in the cracker aisle.

The kosher (but NOT kosher for Passover) unleavened bread is super thin and comes in packaging that walks the line between kitsch and adorable with a bespectacled bubbe in matching earrings and necklace and speech bubbles filled with guilt-inducing quips like, “Would it kill you to try something new?”

The small-batch matzos come in three flavors: salted, everything plus two (the addition of chili flakes and paprika gives the traditional bagel topping a kick that builds up by the fifth or sixth bite) and sugared cinnamon (lightly sweetened and reminiscent of matzo brei — without the work). You can buy boxes but, for the sake of portion control, you might be best served by purchasing a case of 24 snack-sized bags of matzo chips. Then you can bring half to your host and keep the rest for yourself. If you can’t find The Matzo Project in your local gourmet grocery store, you can order online. 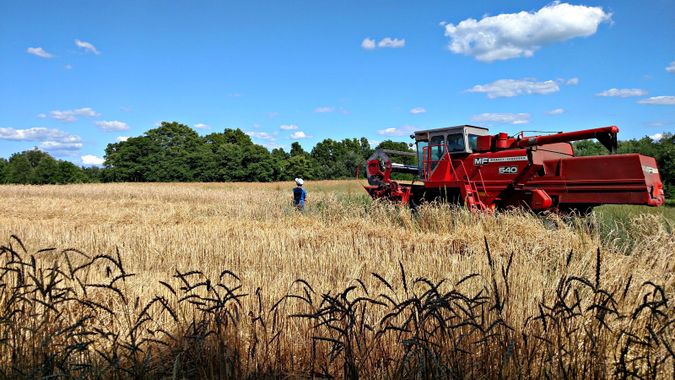 On the other end of the matzo spectrum is Yiddish Farm’s Eretz Goshen Shmura Matzo. This kosher AND kosher for Passover matzo is, like all shmura matzo, guarded (shomer in Hebrew means to guard) from the time of the wheat harvest (rather than from the time it is ground), hand-baked, and thicker and denser than machine-manufactured.

Unlike most other brands, it is certified organic, guarded even before the harvest to make sure that none of the grains have sprouted, stone-milled from wheat or spelt grown locally on the farm, and baked nearby as close to Passover as possible to ensure a fresh final result. The matzo comes in two unsalted varieties: whole wheat and spelt. Both serve up substantial, perfectly imperfect 10-inch rounds with lightly charred spots and edges; the spelt is a bit nuttier, sweeter and slightly more delicate. The matzos are sold in one-pound boxes (6-7 pieces per box) and are available for pickup in a few locations in the New York metropolitan area or by mail-order. 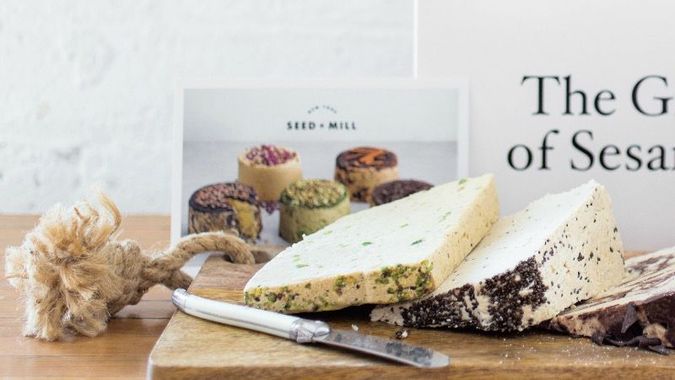 After last year’s ruling by the Conservative movement to allow kitniyot consumption by Ashkenazi Jews on Passover, more people than ever are experiencing the joys of rice and hummus with their brisket and kugel. You can also add halva to your dessert repertoire of flourless chocolate cake and coconut macaroons.

To help you out, Seed + Mill in New York’s Chelsea Market, is offering kosher-for-Passover gift boxes of four quarter-pound wedges of their most popular halva flavors (sea salt dark chocolate, lemon and white chocolate, mixed chocolate and nougat), individually wrapped and marked with colorful identifying stickers. Seed + Mill’s halva is manufactured in a kosher for Passover facility in Israel (though not cut in the US under specific Passover supervision), hand-stirred and packed into dense swirly cakes that rival those in the shuk. The Passover flavors are all dairy (though there are other parve, vegan options), so they might not be served at the seder, but your host will be happy for the rest of the holiday. The gift boxes are now available at the store, select Whole Foods (strting April 4), in Manhattan and online. 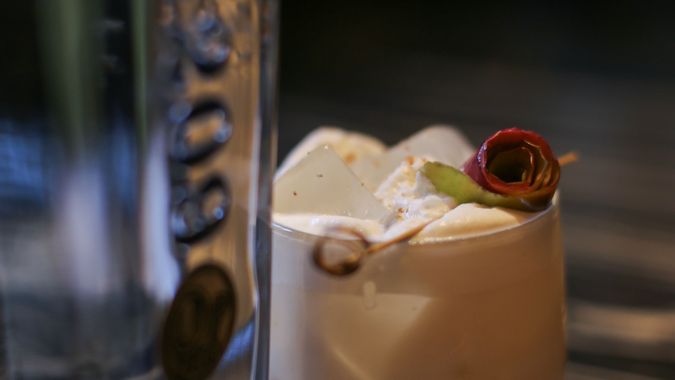 Some Seder hosts might like to roll out their Mad Men-era bar carts to serve up cocktails alongside the customary four glasses of wine. Since most spirits are grain-based and therefore not kosher for Passover, potato vodka is the mainstay of Passover cocktails. In 2010, San Francisco-based boutique Distillery No. 209, with the help of Covenant Winery, crafted the only Passover gin (as well as a vodka). With a base spirit derived from sugarcane, this version remains true to its roots with a distinct piney juniper flavor, yet distinguishes itself with a slightly sweeter and more citrusy start.

Unable to use cardamom seeds in its botanical mix as in a traditional gin, Distillery No. 209 experimented until it came upon local Napa Valley bay leaves to provide a complementary flavor. Tie a bow around the neck of a hefty bottle proudly wearing an OU seal (that more closely resembles a silver medal than a hechsher) and you’re good to go. Throw in a muddler, a pint or two of berries and a few lemons, and you can mix up cocktails for everyone while your host is scrambling with last-minute preparations. 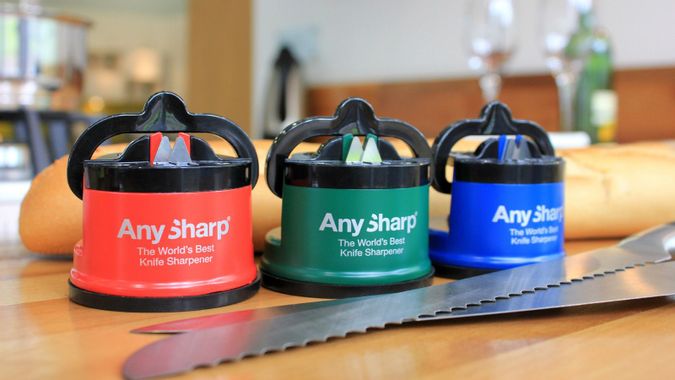 The best way to cut yourself while cooking is to use a dull knife, yet few people reserve their best chef’s tools for Passover. As a fix, regular sharpening can eek the most out of an average blade. AnySharp recently released a rainbow of small, foolproof knife sharpeners that any seder host will appreciate. They are available in the primary colors of kashrut – red, blue, and green – as well as a bunch of pastels, so you can even bring a set of two or three if your host is strict in observance. The small round gadgets suction to the counter and have blades set at the ideal angle for sharpening – 20-degrees – so you don’t need much effort or skill to avoid a trip to the emergency room. To figure out which knives need sharpening, take a piece of paper and hold your knife perpendicular to its edge: if your knife can cleanly slice through that paper with very little effort, it’s sharp; if the paper crumples or rips under the knife’s pressure, it’s dull and needs some sprucing up. 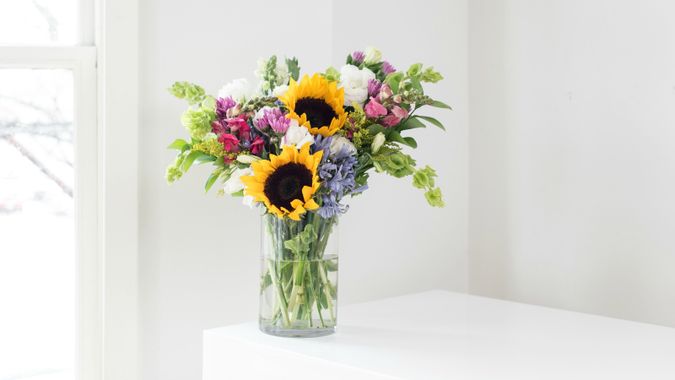 Sure, you could pick up a generic flower bouquet at the grocery store en route to dinner, but you’re classier than that. (As a rule, flowers should be sent either in advance or following a dinner, so that the host doesn’t have to stop what he or she is doing to find a vase and deal with the bouquet.) If you’re sedering in D.C., Baltimore, Philadelphia, New York City or Austin, you can ask UrbanStems to deliver a recently picked, meticulously arranged elegant (read: no carnations, baby’s breath or Easter tulips) bouquet, even if you order it the morning of. A team member will bike the flowers over to your host and then snap a photo to confirm delivery.

If your host has an entrepreneurial bent, he or she will particularly appreciate that the company is one of a handful of venture-backed startups working to disrupt the flower delivery industry. Other notable options if you don’t live in these five areas are Farmgirl Flowers in San Francisco and by mail (but only Tuesday-Friday, so not an option for the first seder) and Flower for Dreams in Chicago and Milwaukee.