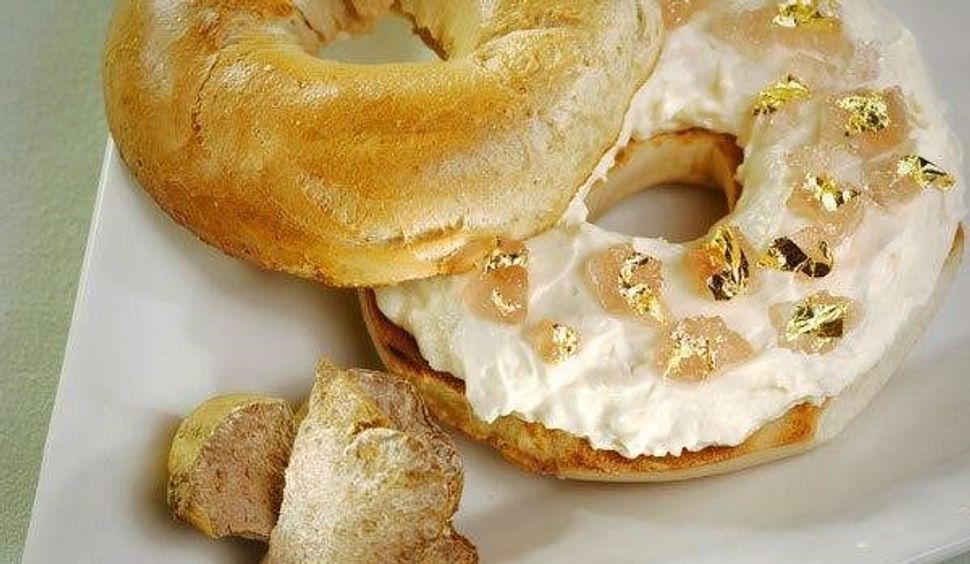 Next time you kvetch about the cost of your daily bagel, consider this:

A Manhattan hotel is offering a $1,000 bagel whose “schmear” includes truffles and superfoods.

The world’s most expensive bread will grace the menu at the Westin New York at Times Square from November 1 to December 15. It’s actually the $1,000 bagel’s second appearance at the Westin, which first presented it to a shocked world in 2007.

“We have received sporadic requests for the $1,000 bagel virtually every year since its inception,” executive chef Craig Red told the Forward. “This year the interest seemed to be greater, so we explored a re-launch. It happened to be the 10-year anniversary of the bagel’s launch, and the hotel’s 15-year anniversary, so the timing felt right.”

You’ll have to order the bagel 24 hours in advance if you’re interested, but Red’s not expecting a mad rush. “We’ll likely see a handful of sales from those who are truffle lovers or culinary aficionados who are curious and would like some bragging rights,” he said. “This is a once-in-a-lifetime type of splurge.” It’s also an indulgence with a conscience; proceeds benefit Manhattan’s Holy Apostle Soup Kitchen.

We asked Red for a quick tour of the $1,000 bagel’s components. “The Alba white truffle is slightly garlicky with a deep musky aroma. It’s very earthy, pungent and deliciously funky,” he said. Cream cheese brings “creamy mild flavor that blends well with additives such as truffles,” he continued.

Red insisted consumers of the mega-bagel will taste the difference from their regular everything-with-a-schmear. “Yes! When you combine the earthy, garlicky flavor with the sweet richness of the freshly made goji berry Riesling jelly, it provides a flavor combination like no other,” he said. When he’s not preparing bagels for the Black-Card set, Red has simple bagel tastes. “I like a nine grain and honey bagel, toasted, with butter and strawberry jelly from Ess-a-bagel,” he averred.

For a reality check on the whole bagelpalooza, we turned to Evan Giniger, who owns Kossar’s, the 2017 Forward Food Award winner for Best Bagel Bakery.

“These kinds of things are fun and make for good stories, but they are not really about food,” he said. “Thousand-dollar hamburgers and bagels are not for real people to eat, and while the ‘proceeds’ go to charity, I have to wonder how many they actually sell.”

The $1,000 bagel “is a cool thing to read about, but I don’t know anyone who would actually order one, myself included,” he said. “However, if you know anyone interested in spending $1000 on bagels, I can offer them about 800 freshly baked authentic real New York bagels for the same price.”