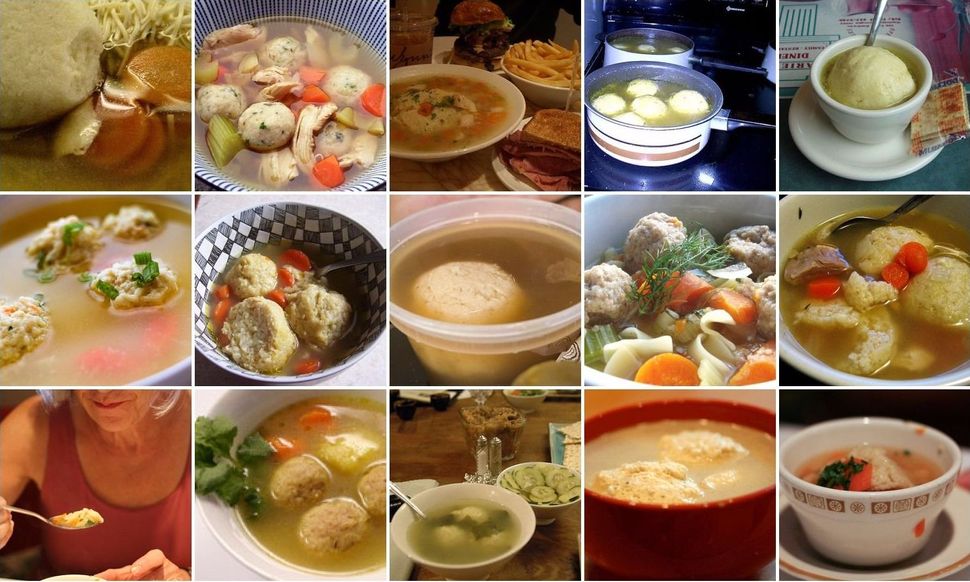 Like matzo balls, bagels used to be plain — or sesame if you were lucky. There were no pumpkin, jalapeño or asiago-cheese bagels on which to shmear your cream cheese.

Now, it’s the matzo ball’s turn to diversify, and Dr. Susan Sandler, a creative kosher cook in suburban Philadelphia, is doing her part: She’s doctoring up matzo balls — and the soup they float in.

Why matzo balls? “Because they are the Jewish white bread; they taste like nothing,” said Sandler. They’re a blank canvas for her experimentation, and she’s having a lot of fun in the process.

It started when Sandler, the medical director at a retirement community, was shopping for chicken soup ingredients and came across a package of quail eggs. “They were so tiny and cute. I thought to myself: What if a matzo ball hatched a quail egg? I hard-boiled the quail eggs, peeled off the shells, and formed a matzo ball around each one. I was beside myself with how amusing this would be.” 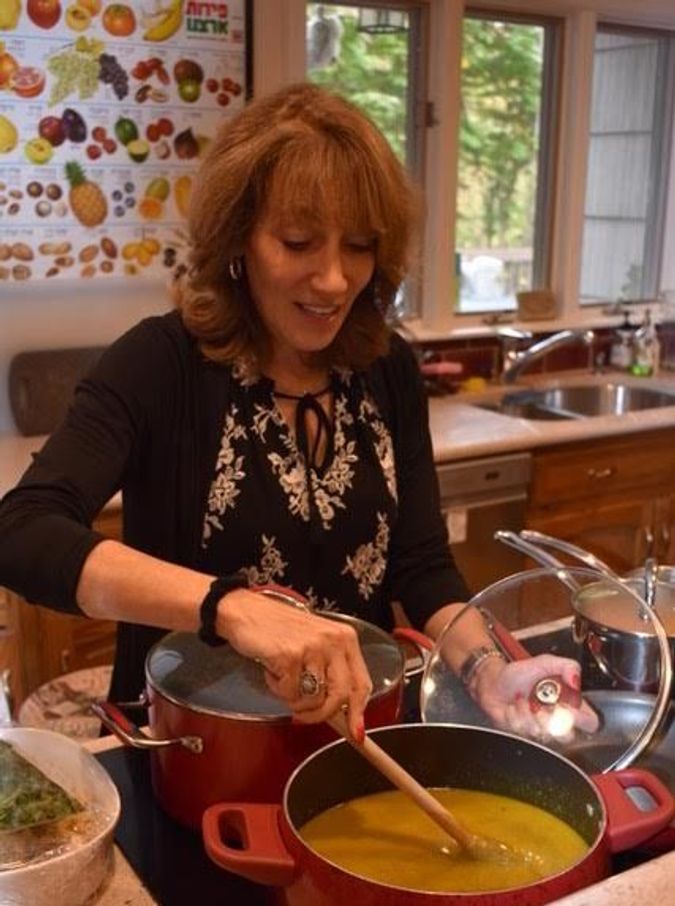 Sandler served them and to her surprise her dinner guests didn’t notice the hidden eggs. “They cut into their matzo balls and just kept talking,” she said.

She was disappointed but undeterred. “I was hooked on the idea that you could change a familiar food and make it yummy, surprising and even a little funny.

Not long after, her matzo balls escaped the confines of chicken soup. She paired curried matzo balls with carrot ginger soup. Her smoked matzo balls kept company with a rich vegetable soup. Both recipes got good reviews.

For her son’s 29th birthday dinner, she dreamed up roasted red pepper soup with parmesan basil matzo balls swimming in it. “Max loves traditional Jewish food, but he’s a vegetarian now and no longer eats chicken soup. So I came up with this recipe, and it was a big hit.”

Her breakfast haroset matzo balls weren’t as successful. She served the warm orbs of matzo meal, milk, raisins, walnuts, cinnamon and sugar atop yogurt and sliced bananas. Her tasters were unenthusiastic about the competing warm and cool temperatures and the consistency of the dish.

“You have to be willing to make a mistake and say, “That’s not working out. Next time I do it I’m going to do it differently,” Sandler said.

Sandler isn’t the first to tinker with matzo balls. At Cheu Noodle Bar in Philadelphia, chef Ben Puchowitz has gotten attention for his brisket matzo ball ramen. Lots of recipes online suggest adding spices to liven up the classic version. But it’s hard to imagine that another home cook could be as enthusiastic and playful in her pursuit of matzo ball perfection.

“Great spices are everything,” Sandler said. Luckily, she has access to some of the best in the world. Her oldest sister lives in Israel, and each time she visits she stocks up on spices at Jerusalem’s open-air Mahane Yehuda Market or at the Hadar Mall in Talpiot.

Closer to home, she sought out La Boite, a Manhattan spice store that makes special blends for chef Michael Solomonov’s Zahav restaurant in Philadelphia. At La Boite, Sandler bought zaatar, a Middle-eastern spice blend; and mousa, a combination of onions, saffron and parsley that she uses for grilling fish and vegetables.

Sandler’s kitchen experimentation has raised a number of questions, some as weighty as a densely packed matzo ball.

In fact, that’s the first question: Floaters or sinkers? In this heated culinary controversy, Sandler chooses the sinkers — heavy and dense. “I want to cut into a matzo ball and find something inside. If it’s light, it disintegrates when you cut into it. All the pieces end up floating in your soup, and you don’t get a matzo ball, you get matzo fragments.” Plus, a dense ball is better for her concoctions.

Is it kosher to fiddle with a traditional matzo ball? “Matzo balls should never be dairy; they go in chicken soup,” said Sandler, who keeps a kosher home. The thought of a dairy matzo ball was odd to her at first. “But when I made the parmesan cheese matzo balls I was smiling because I knew they weren’t going in chicken soup. They would be delicious in roasted red pepper soup.”

If dairy matzo balls made her think twice, no wonder she worried that her lamb mint matzo balls, destined for Persian sabzi soup, crossed the line. “When I started making the lamb ones, I felt guilty about it,” she mused. “Why is this not a meatball?”

Sandler’s son Sam cautioned her about her mish-mash of cuisines and the slippery slope of cultural appropriation. “He explained, for example, that while a hamantaschen filled with marmalade could be acceptable, one filled with chopped up Christmas candy canes was not,” Sandler said.

Sometimes Sandler wonders what her beloved grandmother, a good cook in her own right, would have said about her newfangled recipes. “Would she tell me that a matzo ball isn’t supposed to have stuff in it? Would she love it or think it’s a travesty?”

But she knows that her grandmother would have loved her chicken soup. “My matzo ball spirit guide has led me to making better chicken soup,” Sandler joked.

These days, long-simmered bone broth is touted for its medicinal benefits, but Sandler isn’t surprised. She worked for years as a physician in family practice, and both she — and the grandmothers she treated — were believers in the healing properties of chicken soup.

“I’ve started to make my chicken soup in a crock pot overnight,” she said. “The broth is much more flavorful that way, but the whole house smells like chicken soup. I can’t even sleep. It’s the wrong smell for the middle of the night. I could sleep through the smell of pancakes maybe (yeast and maple syrup), but I can’t sleep through chicken soup.”

Sandler easily admits that she doesn’t make all her soups start from scratch. She’ll add spices and diced vegetables to a store-bought boxed soup to give it a homemade taste. Soup is merely the liquid bath for her matzo balls, now that they’ve gone from sidekick to superstar. To save time, she sometimes uses a low-sodium matzo ball mix as a start.

And then? If Sandler can potchke with matzo balls, what Jewish food is next?

“I had been thinking about kreplach,” Sandler confided. “People have been putting weird things like brisket in dumplings for a long time. But when they came up with edamame kreplach, I decided that the lowly matzo ball had more room for growth.”

Gefilte fish has crossed her mind, too. “They put fish balls in Vietnamese pho soup. How is that different from a gefilte fish ball?” she asked. “I would take some gefilte fish and mix in shredded seaweed, because fish like to be with seaweed, right? And I put them in fish chowder, miso soup or pho.”

Sandler has even considered serving a platter of matzo balls without any soup, but rejected that idea. “I asked myself, Why do I serve soup at all? It’s the same reason I serve dessert and coffee. I’m just trying to make the meal last longer so my friends and family will linger at the table and talk.”

Joyce Eisenberg and Ellen Scolnic, also known as The Word Mavens, are the authors of the “Dictionary of Jewish Words” and “The Whole Spiel: Funny essays about digital nudniks, seder selfies and chicken soup memories.” They can be reached at thewordmavens.com.