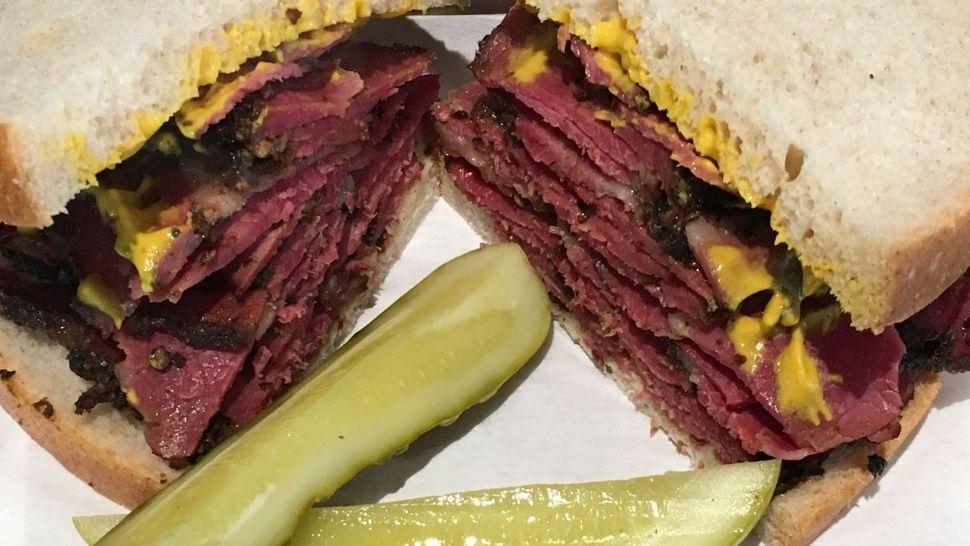 It’s a quote that’s made the rounds already, but it’s so good that it bears repeating: “It’s as if pastrami and corned beef got together, had a couple glasses of wine, turned on some Barry White and made a baby.”

That is, until he got caught and his smoke meat was confiscated.

On Saturday, Feb. 17, the Bay Area will get its first taste of it in two years, as Augie’s Montréal Deli (the logo includes an accent) is scheduled to open in Berkeley, a couple of blocks from Berkeley Bowl West. 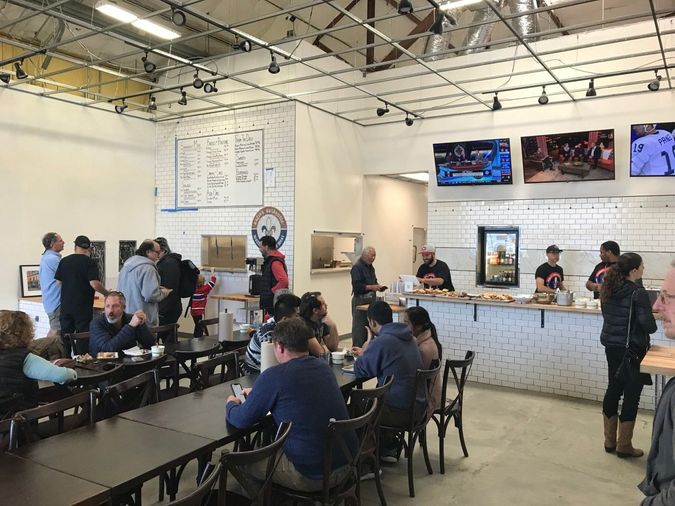 Smoke meat (sometimes spelled smoked meat) is a specialty from Montreal that was originally brought there by Romanians Jews. According to Wikipedia, “it has taken such strong root in the city that both Montrealers and non-Montrealers alike identify it as emblematic of the city’s cuisine.” It is nowhere nearly as popular throughout the rest of Canada. 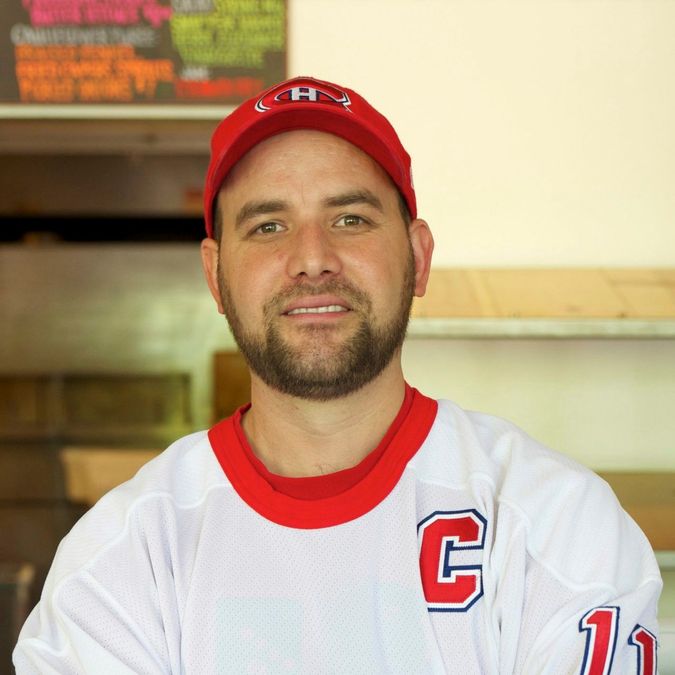 Attending a preview, we agreed that while the flavor of this meat is very similar to pastrami, the texture of it is what makes it so special. But while the beef is the main event, the turkey shouldn’t be considered second fiddle. While a turkey sandwich can just be meh, this one was extraordinary; giving the turkey the same treatment as smoke meat turned it into another specimen entirely.

The pickles had a wonderful garlic bite, and the slaw provided the right acidic zip. As for the latkes, the rye provided a slightly sour note, and the poutine? Well, what else is there to say about french fries smothered in fresh cheese curds and brown gravy except that it seems like the best stoner food on the planet?

For Gopnik-Lewinski, who arrived in Berkeley when he was 11, smoke meat has always been a part of his family tradition. He’s still a Canadian citizen, and his family often visited his grandparents in Montreal. “They were always very big into smoke meat in general and deli culture,” he said.

“We’d go have a sandwich and then two months later you’re hungry again,” Gopnik-Lewinski said, quoting his uncle, New Yorker staff writer Adam Gopnik. “Then we’d have to walk it off in the cold to try to work off some of the calories.”

Speaking of noteworthy relatives, Gopnik-Lewinski is the son of UC Berkeley professor and child psychology expert Alison Gopnik, though Gopnik-Lewinski claims that the Jewish overachieving thing skipped his generation (“I used to be a rapper,” he said). 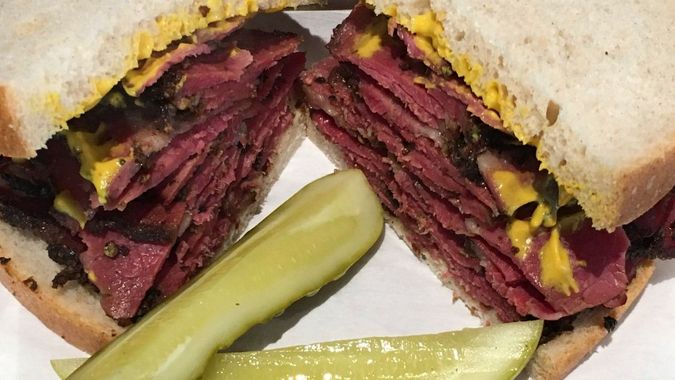 In recent years, Gopnik-Lewinski began tinkering in his own kitchen to learn how to make smoke meat himself. Eventually, he ended up with a product he liked so much — and that his Montrealer friends and family all thought was the real deal — that he started doing pop-ups. That was four years ago, and Beauty’s Bagels, purveyor of Montreal-style bagels, in Oakland was his regular pop-up home. He began thinking about opening his own restaurant, but then baby No. 3 happened, which put his plans on hold for awhile.

“Blake Joffe [co-owner of Beauty’s Bagels] was a super mensch and said, ‘Come do pop-ups here,’ and that’s how it started,” he said. “I don’t know if I would have had the balls to do it myself. We have writers and academics in my family, not restaurateurs.”

Much of the credit goes to his wife, Josie, a pediatrician, who “inspired me to get it up and running and has been amazing, I’m not sure who else would have the fortitude to go through this crazy process.”

Given that Gopnik-Lewinski has no kitchen experience, he trained in Montreal at one of the well-known smoke meat establishments, Smoke Meat Pete in suburban Montreal.

He also had to find a co-packer here, to create the product according to his specifications, since the health department would never allow a restaurant to do their own smoking the way smoke meat requires. Premier Brand Meats in Redding is his partner in this venture, and he spent more than a year making the trip up Interstate 5 to taste the results and perfect the product.

“It’s a high temperature product, and these kinds of ovens they use will shut off automatically when the meat gets to a certain temperature,” Gopnik-Lewinski explained. “While the spice rub was great initially and the flavor was there, the crumbly, buttery texture was not. Finally, they figured out they could bypass the shutoff switch on the oven.”

For those unfamiliar with smoke meat, it’s worth saying here: Do not try to Reuben-ize it, or ask for it with any additional items other than the way it comes: meat on rye bread (from nearby Metropolis Bakery, in this case).

“Someone tried to tell me I have to have Swiss cheese,” said Gopnik-Lewinski, his voice growing indignant with the thought. “If you’re a good enough customer, maybe, I’ll keep some in the back for you, but we will have no avocado, no bacon, no lettuce, and no tomato. The one concession I’ll make is to give customers their choice of mustard. In Montreal, it’s traditionally yellow mustard only, but here we’ll offer deli mustard, too, but I’m not telling the Montrealers that. We are in America after all, the land of the free, and they give more choices here.”

(Later, when told that the note about the deli mustard would be in the article, he warned that if the Montreal Smoke Meat mafia shows up to bust him, it will be my fault.)

Besides the smoke meat sandwich, there will be real Canadian poutine (both meat and vegetarian, with the vegetarian version named after his daughter, Georgie) and a smoke turkey sandwich named after his son Atticus (Augie’s is named after his first son). “I’m channeling my mom, and don’t want to cause any childhood trauma,” he said.

One can also get smoke meat on a salad rather than in a sandwich, this being California and all.

“My grandmother Myrna was the one who first did this,” he said. “She’s not a huge bread fan, and I made fun of her, but it came out delicious and for those avoiding bread, it’s a nice option.”

Then there will be his trademark latkes too, with rye crumbs used to hold the potatoes together rather than the traditional flour or matzah meal.

“I’ve never been a big matzah meal fan, and I kept noticing after the pop-ups how I had the ends of these loaves of bread that I couldn’t use for sandwiches. I’m a good Berkeley kid, and I didn’t want to be wasting stuff, and wondered if that could be bread crumbs.”

Indeed it could, and it is.

For those curious about sourcing, Gopnik-Lewinski was apologetic when he said that he tried using local grass-fed beef, but none had the high-fat content he needed, so he’s using Midwestern corn-fed beef.

There is also a grilled cheese curd sandwich, and sides such as Montreal-style coleslaw (with vinegar) and pickles.

The restaurant is counter service with long, communal tables.

Eventually, Gopnik-Lewinski hopes that Berkeley also will become known as the place that put smoke meat on the California map.

“I haven’t done a pop-up in almost two years, and I’m still getting emails from people who want us to ship meat to them,” he said, adding that even the chef at the Canadian embassy in Washington, D.C. is awaiting a shipment from him. “You’d think that diplomats should be able to bring whatever they want into the country, but I told him, ‘Give me time to get established,’ and I’ll will be sending it there. I want it to be known here like in Canada.”

Augie’s Montreal Deli is at 875 Potter St. in Berkeley, roughly a block from the intersection of Ashby Avenue and Seventh Street, and the hours are slated to be from 11 a.m. every day until 3 p.m. on Mondays and Tuesdays and until 10:30 p.m. the other five days of the week. Sandwiches range from about $14 to $19, with a classic poutine $8. The shop also carries bagels from Berkeley-based Baron Baking and other items.