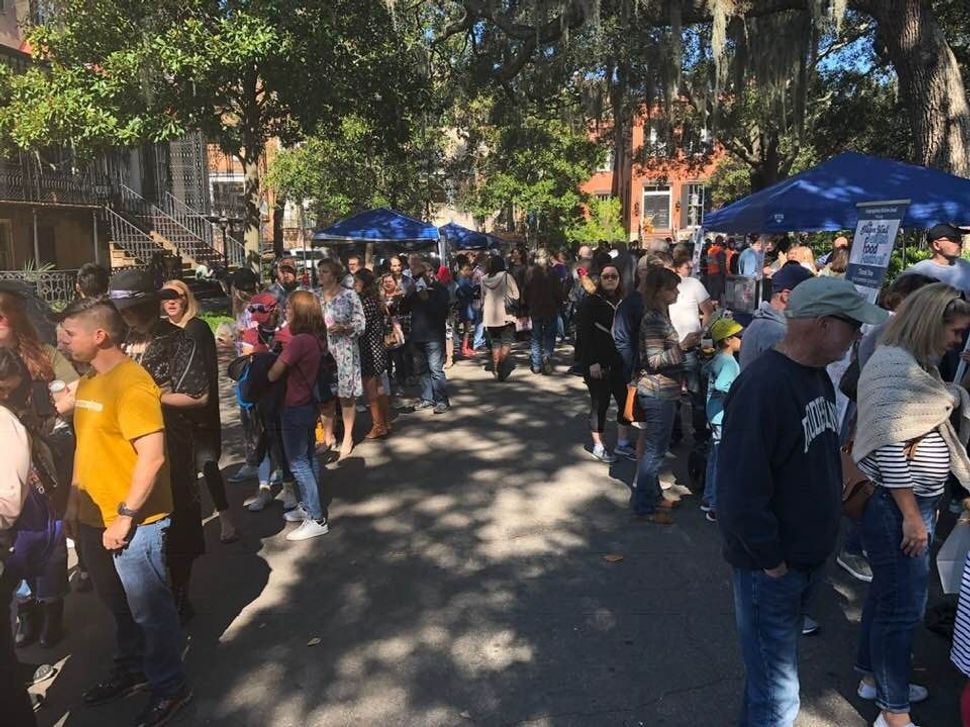 The festival in full swing Image by John Ekin

Congregation Mickve Israel, located in Savannah, Georgia, was preparing for its annual Shalom Y’all Jewish Food Festival when they heard about the synagogue shooting in Pittsburgh.

As the third oldest Jewish Congregation in America, recently celebrating its 285th birthday, Mickve Israel requires a high level of security, and for the last three years, they’ve had Savannah policemen at all their events. “It’s a drain on our budget but we feel it’s something we need to do for the safety of our congregation,” said Rosenthal. Being the third oldest congregation in the country in the middle of downtown Savannah, meant standing out, to the point where the synagogue board felt that if there “was going to be any new target, it would be us, because we stand out. Because of our history.”

Excitement was high as the community anticipated the piles of corned beef, pastrami, tongue, vegan cholent, stuffed cabbage and sizzling Sephardic lamb that awaited them, with sour cream and applesauce at the ready. “It takes about nine months of planning to execute the festival,” said Jennifer Rich, Shalom Y’all co-chair, who was originally nervous about moving from Colorado to the South. She quickly discovered that “Jews are woven into the fabric of Savannah.”

Then the news broke. Right before Rabbi Haas was about to give his weekly sermon on Saturday, at 11:30 am on October 27, Rosenthal overheard chatter in the synagogue kitchen that a gunman had attacked a Pittsburgh synagogue and left eleven dead and six wounded in the largest terrorist attack of Jews on American soil. “It’s hard for me talk about, you’ll have to excuse me,” Rosenthal said, voice shaking.

If congregants were aware of the tragedy, nobody wanted to be the one to publicly acknowledge it, so as synagogue president, the responsibility fell on Rosenthal. “I announced there’d been a shooter and that we need to pray for them. We are with them.”

“As American Jews we always felt a safety and security here,” said Rich. “To see what happened in Pittsburgh makes me very afraid. I’ve got teenage girls…”

The congregants wondered: Should the Shalom Y’all Food Festival continue? The name, Shalom Y’all, a combination of the Hebrew word for hello, peace and goodbye, and the Southern colloquialism of y’all, was a symbol of the storied Southern Jewish heritage. The food festival was not just a food festival, but a celebration of the Southern Jewish community. “We’re going to have it,” decided Rosenthal. “We’re not going to let some anti-Semite idiot control our destiny or tell us what to do.” 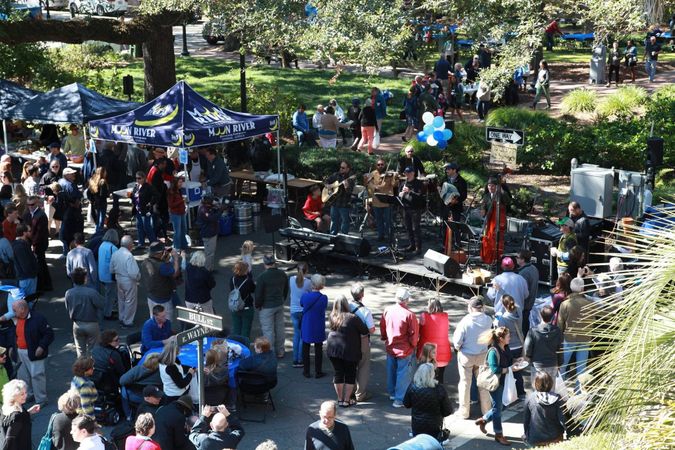 The day after the Pittsburgh shooting, there were record crowds at the Shalom Y’all Food Festival. “90% of them were not Jewish,” said Rosenthal. “They were walking up to us and saying we’re with y’all and we’re sorry about what happened, and it really warmed my heart.”

The mood was solemn at the festival, “but most of all it was a happy time. A community time,” said Rosenthal. 250 volunteers, many of them not Jewish, showed up to show support to the community. Savannah sent extra police officers. Rich estimates that 5-6,000 people showed up.

John Ekin, a 58 year old cruise director, who isn’t Jewish but has found himself adopted by some lovely bubbies, found himself at Shalom Y’all on Sunday. “I felt a little that we were determined not to let the evil of the world take this celebration away from us,” he wrote, comparing the festival to “telling stories that make us smile at a funeral, remembering the best of someone’s life.”

“When I come into work everyday, I walk by letters from George Washington and James Madison and Thomas Jefferson that express their happiness that we’re a thriving Jewish congregation in the South, and that was their goal, to bring religious freedom to the United States,” said Rich. “But we need our leaders to step up. We need people to say we’re not going to allow this hatred to take over.”

“We all had heavy hearts underneath, but the food festival needed to go on,” Ina Kuller, programing assistant at Mickve Israel, said.

“We stick together, we stand together against hate,” said Rosenthal. “We will not let anti-Semitism control our faith or what we do. Our community stands with the Pittsburgh community. When they hurt, we hurt.” 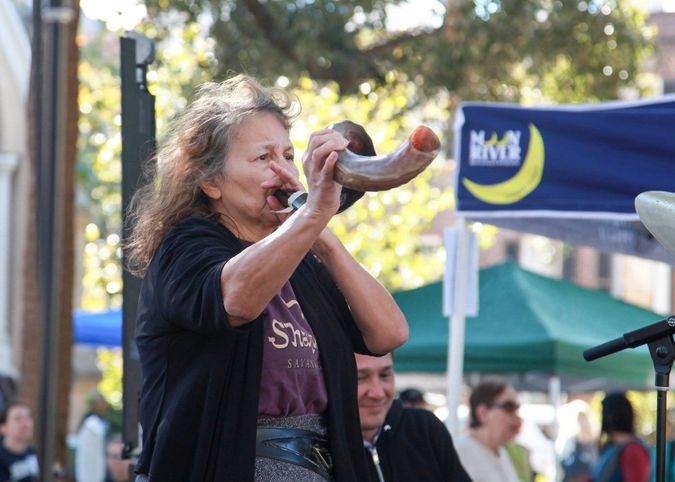