On The Thanksgiving Menu for “Sababa” Cookbook Author Adeena Sussman: Lots of Pie 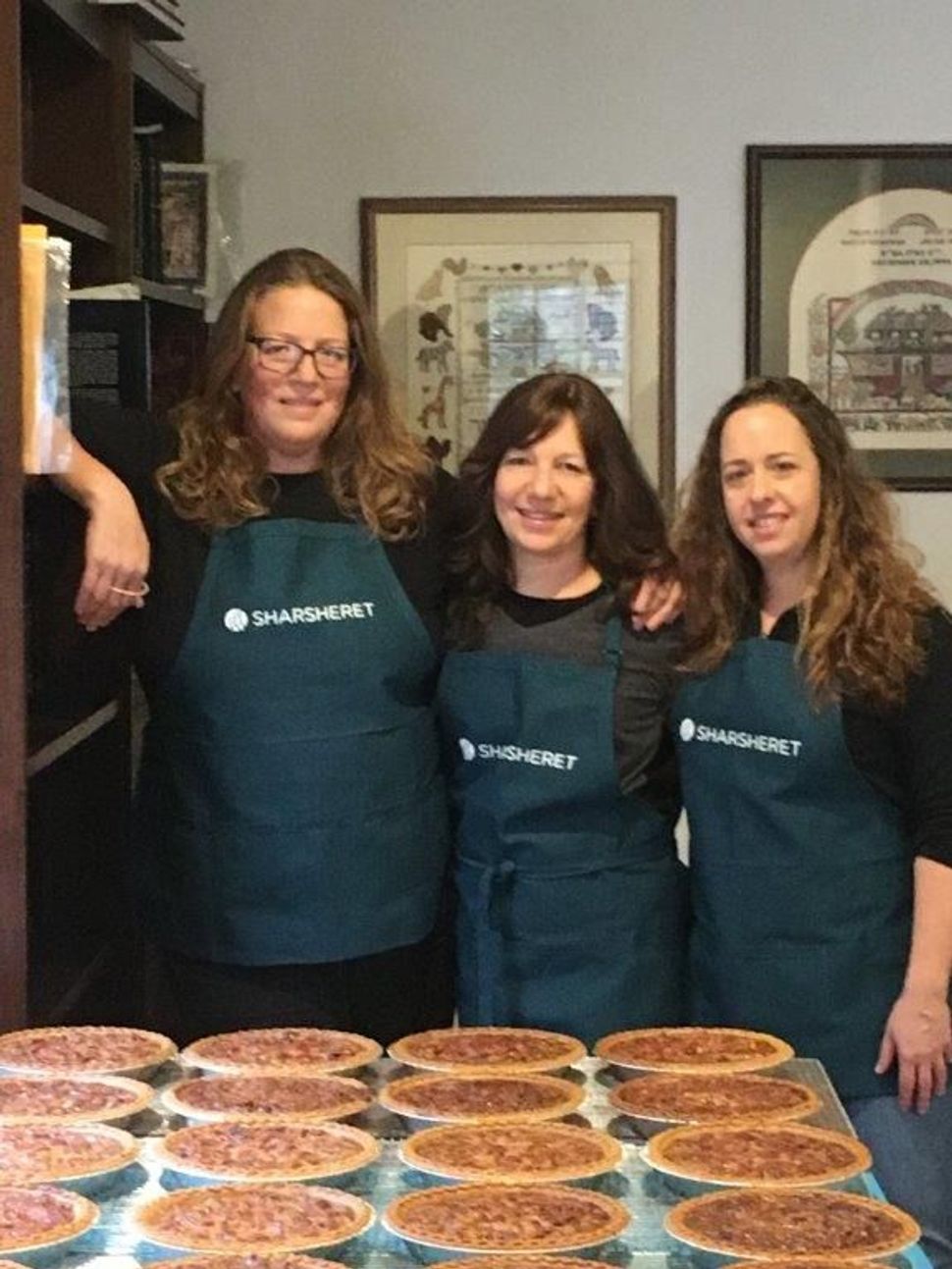 Since the publication of her smash hit cookbook “Sababa” this fall, Adeena Sussman has become best known for her wildly popular Israeli-themed recipes like sumac grilled chicken and tahini-glazed carrots. But long-time Sussman fans also know her for an entirely different cuisine: Thanksgiving pie.

For the past decade, Sussman and her sister Sharon Wieder of Teaneck, New Jersey, have been the heart, soul and two of the dozens of bakers behind an annual multi-city Thanksgiving pie bake they created, Pies for Prevention, which links buyers with bakers in the U.S., Israel and Canada. Bakers cover the costs or are sponsored by donors and all proceeds go to Sharsheret, an organization that provides information and support to Jewish women with breast and ovarian cancer. Over ten years, the pie sale has raised over $500,000 for Sharsheret.

For the sisters, both diseases hit close to home. Sharon is a breast cancer survivor as well as a Sharsheret volunteer, and both their mother, Stephanie Sussman, and maternal grandmother, Ann Nadrich, died of ovarian cancer.

Food was the natural choice to honor them. “Our mother, of blessed memory, was always a glass half full, make lemons out of lemonade person,” says Sharon Wieder. “She and our father always opened their home to guests on Shabbat, Jewish holidays, and throughout the year. There was rarely a time when we did not have family, friends and complete strangers join us for a meal.”

Wieder says that, growing up, guests in their parents’ home often included chief rabbis while Seders had more than two dozen people. “She made it look effortless and easy,” says Wieder. “She was an excellent cook who made everyone feel comfortable in our home.”

And while their grandmother “did not love cooking,” says Wieder, her contribution was always washing the dishes (“and there were a lot of them”) and her potato latkes were “absolutely delicious.”

The sisters came up with the idea for the pie sale along with Sharsheret founder and former Supreme Court law clerk Rochelle Shoretz, who passed away of breast cancer in 2015.

Wieder says they chose Thanksgiving so as not to compete with other Jewish bake sale fundraisers that tend to be around the Jewish holidays. “And that made pie the easy choice.” Pie choices tend to be the traditional including pumpkin and pecan, but each lead baker makes the choices, and some sites include cranberry bread, blondies or other baked goods. The Sussman sisters added peanut butter chocolate blondies to their sale because that was one of their mom’s favorites. Pies are ordered online by clicking the city of your choice on the Pies for Prevention site; each city’s site indicates whether the delicacies have been baked in a kosher kitchen.

The sisters aren’t just the brain trust here; they bake together every year. And despite being busy with Sababa, Adeena will be flying in to bake with Sharon in Teaneck, along with a baker friend, Anat, who is part of their yearly bake-off. Their team alone expects to produce 700 orders this year.

And the Sababa influence has joined the pie sale. This year, says Adeena, the Los Angeles group is making the cookbook’s popular Tahini blondies. “Perhaps Sharon and I will add them to our sale next year!”

And where will Sussman be eating her Thanksgiving pie?

“With my sister at her in-laws,“ says Sussman, “enjoying a decidedly all-American Thanksgiving dinner of turkey with all the trimmings, and nary a drop of tahini in sight!”

Fran Kritz is a healthcare policy reporter based in Washington, D.C. whose work appears frequently in the Washington Post and on NPR.org. She loves writing about food just as much.

On The Thanksgiving Menu for “Sababa” Cookbook Author Adeena Sussman: Lots of Pie