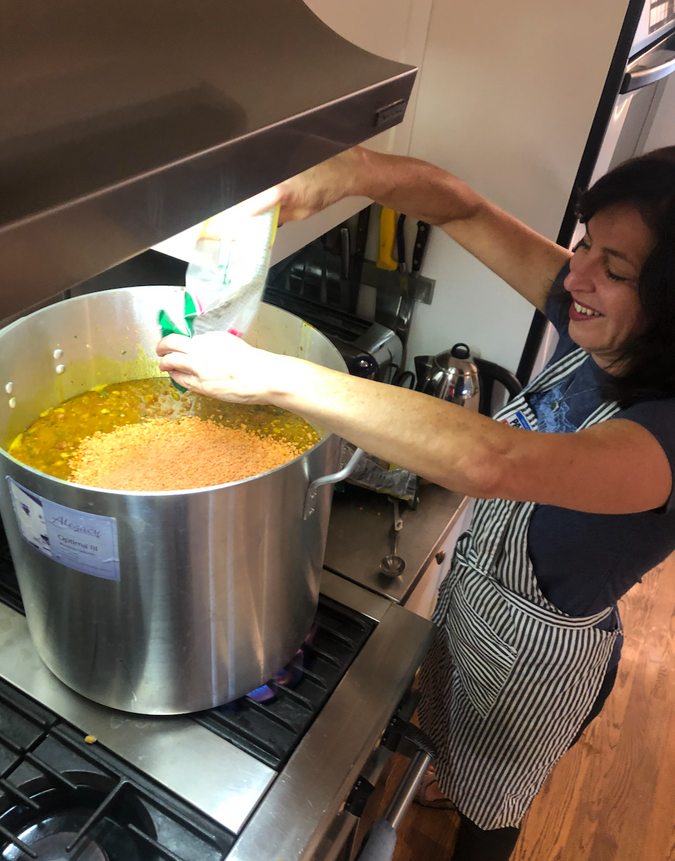 Among the many beloved traditions the pandemic has derailed is one that is only a year old: making and serving a Yom Kippur break-the-fast soup to 300 very hungry people.

The soup is Morrocan harira, the traditional dish Sephardic Jews, especially those from North Africa, eat at the end of the Yom Kippur fast.

Harira is stew-like, with onions, tomato, rice, lentils, cumin and chile, then finished with lemon juice, parsley and dill. The toasted spices and herbs work like smelling salts, sna;ping you back to earth. The lentils quickly fill you up without weighing you down. The touch of hot chile pepper jumpstarts your appetite.

For Askenazi Jews, like me, the meal that marks the end of the holiday of atonement and repentence can be a little punitive itself. The light, healthy being inside you suddenly confronts a groaning board of salty lox, gummy cream cheese, oily whitefish, the egg- and sugar-packed baked noodle pudding called kugel, and of course bagels, piles and piles of bagels. Bagels stacked up like barbell weights, bagels that will set anchor in your stomach until the next High Holy Day.

Ashkenazi Jews settled in Central Eastern Europe around the end of the first millennium. Their foods are the foods of their neighbors: bagels, lox, cream cheese, noodle pudding, or kugel, pastrami, corned beef, borscht. When you think deli, think Ashkenazi.

Sephardic Jews took a different route, settling in Spain—the Hebrew word is Sepharad—then fanning out to Portugal, North Africa and the Levant. The foods they adopted or adapted include hummus, couscous, harissa and tagines.

Sephardic cuisine reflects the Mediterranean diet. Meanwhile, no one has written The Ashkenazi Diet. I suppose it’s possible to slim down on nothing but gefilte fish and cheese blintzes, you’d just have to schedule in four hours of Lagree Pilates, twice each day.

I enjoy Sunday morning lox, but at the end of Yom Kippur, I go full Sephardic.

This recipe comes from Meme Suissa, a generous and specatcular Moroccan cook, the mother of my former colleague David Suissa. She learned to make harira from her grandmother and mother in Casablanca. Years ago, I spent an afternoon at David’s house while Meme walked me through the steps. The recipe came with reminiscences about how the soup was something the Jews and Muslims shared — the Muslims made it for Ramadan, the Jews for Yom Kippur, and they would often trade recipes and tastes. The idea that a soup could be the bridge between Jews, Muslims and their most sacred holiday makes it that much more special.

Over the past two years, I’ve made a slightly adapted version of Meme’s recipe for my community, Nashuva. My wife, Rabbi Naomi Levy, leads High Holiday services for Nashuva, the congregation she founded. One night, I suggested to her that instead of offering just the standard Ashkenazi fare for a communal breakfast, we add harira.

Naomi announced it to her congregation of 1200 souls. Soup was on.

I combined Meme’s recipe with inspirations from other cooks and sites, including David Tanis and TasteofMaroc.com. To cook for a village, it takes a village.

I bought a 15-gallon soup pot from Smart and Final, two feet tall by 1 1/2 feet in diameter. Our friend Julie Drucker came over, along with my mother Sari, and we chopped and sautéed 30 onions, added 120 cups of diced tomato, 30 cinnamon sticks, 20 cups of lentils, 120 garlic cloves — you get the idea. I figured just 300 people would stay for the breakfast, but that was 300 people who hadn’t eaten in 25 hours.

This year, there will be virtual services and no harira — thanks pandemic. But the recipe I scaled up to 300 easily scales down to serve 10, which will allow for leftovers.

Next year, let’s all pray for soup.

Harira for a crowd

This recipe serves 20. It can easily be divided or multiplied. (For Nashuva, I multiplied it 15 times). This version is vegan, though you could replace the water with chicken stock, or even add shreds of cooked chicken, as Meme Suissa does.

Add tomato and tomato paste and bring the mixture to a simmer. Cook, stirring until mixture thickens somewhat, then add 2 1/2 teaspoons salt, lentils and garbanzos. Add 16 cups of water.

Bring to a boil, then partially cover and lower to a simmer.

After one hour, taste for salt, pepper and other spices. Add rice. Cook for another hour, adding more water to keep the consistency like cream. The beans should be very soft.

Serve, and encourage your guests to garnish the soup with lemon, herbs, harissa and olive oil.

This recipe and a different version of this story originally appeared on Foodaism.com. 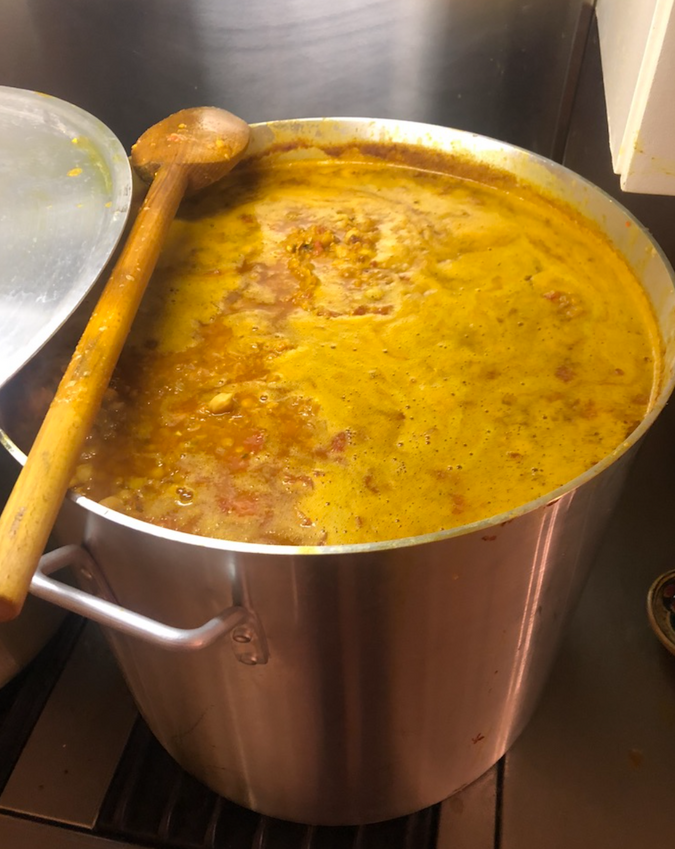 Harira for 300 Image by @foodaism