Not a Lower East Side Knish 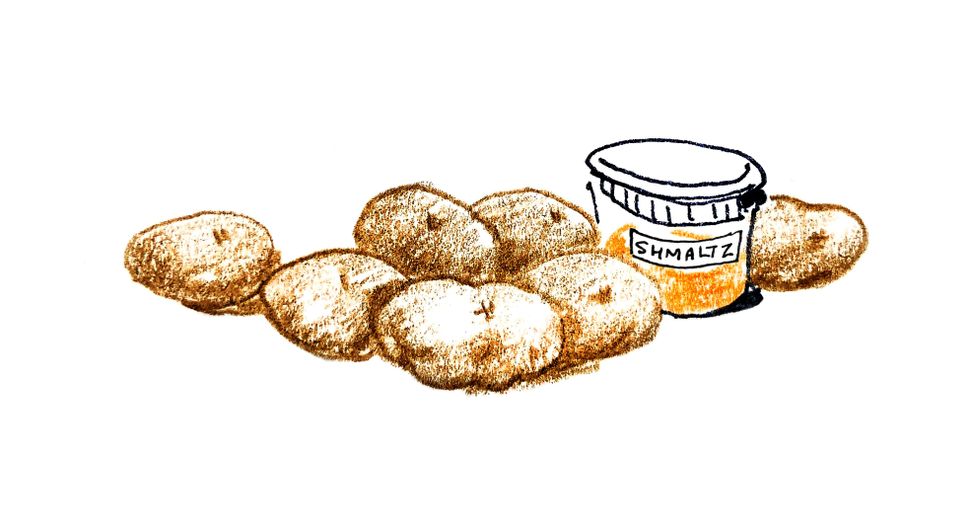 Second only to “Pigs” in Blankets, I love a good knish — especially our roti knish: creamy-savory potato filling encased in a thin layer of ultraflaky dough. It is the perfect finger food. Using sheets of store-bought premade roti dough helps you knock these babies out fast. (Frozen roti dough is available at some grocery chains and most Asian markets.)

For the filling, cook about 1 pound [455 g] of peeled russet potatoes in generously salted boiling water until soft, maybe 20 to 25 minutes. Drain and transfer to the bowl of your stand mixer. Add about 1 diced and well-caramelized yellow onion, 2 teaspoons of kosher salt, a pinch of black pepper, and 2 heaping spoons of softened cream cheese to the bowl. (A whisk and a large bowl work, too, if you’re analog.) Begin mixing at low speed and gradually increase the speed to medium. (The filling will taste a little salty at this point.)

Work in batches while keeping the rest of the roti in the freezer. Let 5 roti defrost slightly on the counter for about 30 minutes. Plop a generous portion of filling in the middle of each one. Fold the dough over the filling to make a half-moon, push out the air, and crimp the edges tight. Sprinkle and press some sesame seeds over the top of the pocket if you like. Score the top a few times so it doesn’t pop open. Chill in the refrigerator while you fill the remaining roti. (At this point you can freeze the knishes in resealable plastic bags for up to 3 months.) Fry in vegetable oil until they’re beautifully golden. Sprinkle with salt and don’t forget the deli mustard for dipping.

Reprinted from “Eat Something” by Evan Bloom with permission from Chronicle Books, 2020.

Not a Lower East Side Knish