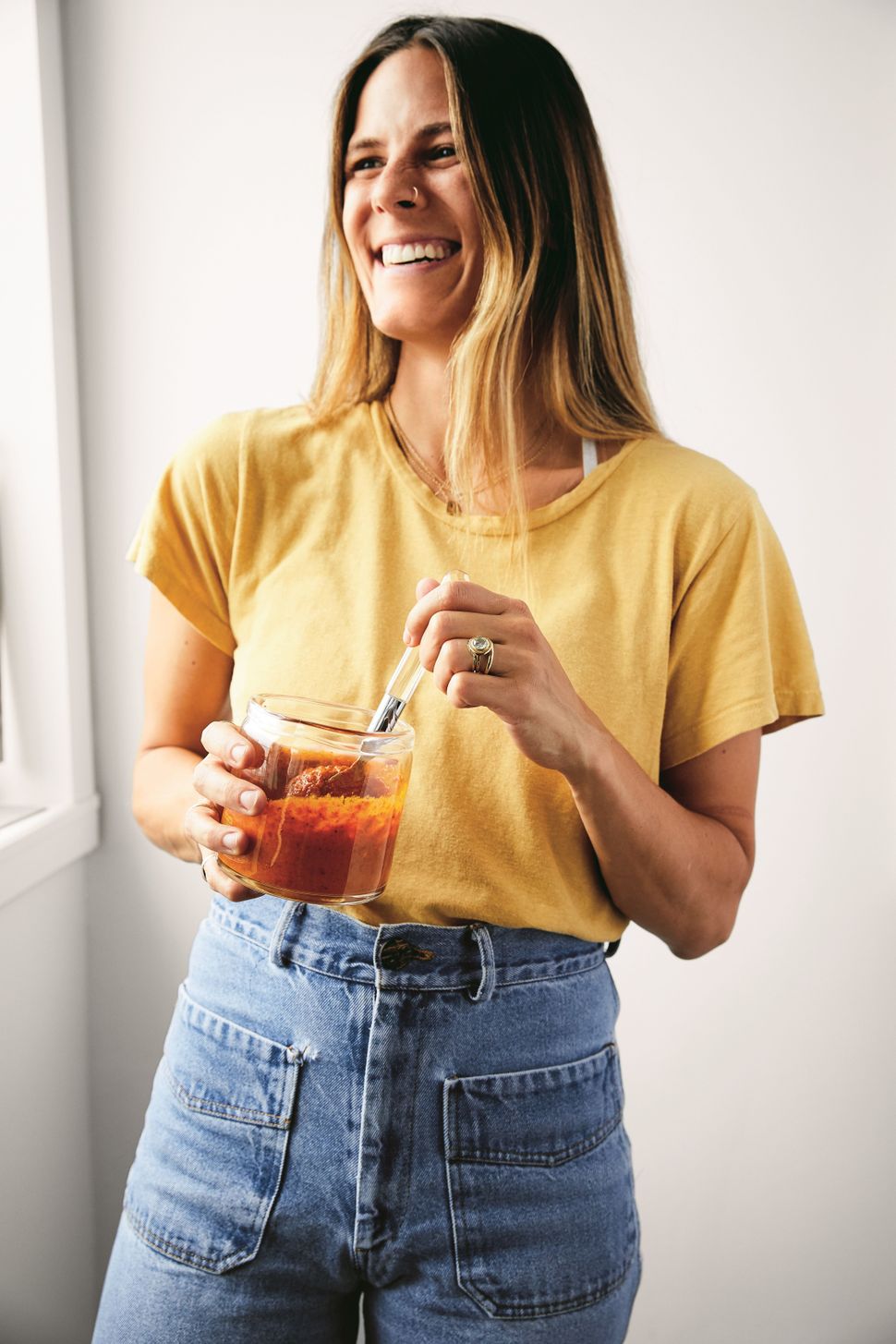 Eden Grinshpan has the kind of career many food-lovers would envy; now the host of Top Chef Canada, she used to host a show for The Cooking Channel called “Eden Eats,” in which she visited various cities to explore their local food scene, a la Anthony Bourdain. Raised in Toronto, Grinshpan is the daughter of an Israeli father and Canadian Jewish mother. She now lives in Brooklyn with her Israeli husband and their three-year-old daughter, and is the author of the new cookbook with Rachel Holtzman, “Eating Out Loud: Bold, Middle Eastern Flavors for All Day, Every Day” (Clarkson). She spoke to The Forward after a day of being on set for the current season of Top Chef Canada. This conversation has been condensed and edited for clarity.

Your television career was actually launched by an extended stay in India. How did that happen?

I attended culinary school at Le Cordon Bleu in London, where I studied pastry and cuisine. After graduating I traveled a bit and worked in kitchens in Europe, which just gave me the travel bug. I ended up doing a three-month program in India, and after living in Israel for a year, I went back there to work at an orphanage in Rishikesh where I had volunteered at before. They had a café built into the orphanage. I had saved up money for them, and told them ‘I could just give it to you, or I can use it to reopen the business for you.’ We reopened it and they kept it open a pretty long time. My parents had the idea that I film a video of my doing it, and that helped me get into TV.

Obviously Top Chef is very popular in America. What’s the Canadian version like?

It’s in its ninth season, and I’m in my fifth season as host, like Padma (Lakshmi), but I’m definitely on the goofier side. I’ve also been a judge, and as host I get to join in on the judging. It’s the same as the U.S. version but with Canadian talent and chefs. People from the Top Chef franchise come and make sure that everything is done the same way. It’s probably my favorite gig, I love it so much, and I get to come home every year and stay with my parents while shooting it.

Telling each eliminated contestant “Pack your knives and go” falls on you, then. That must be so difficult. 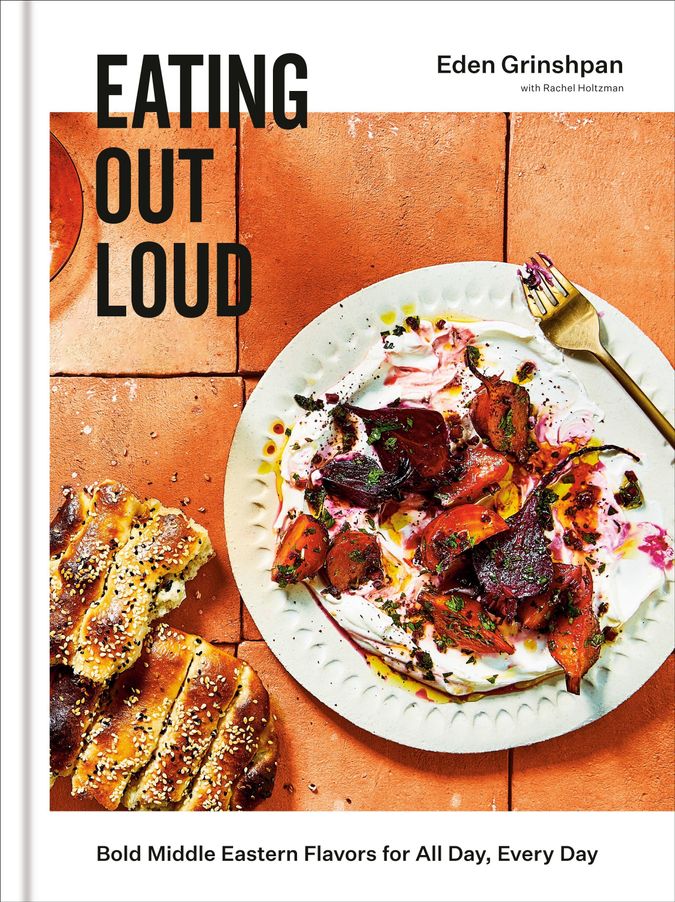 Absolutely. It’s really hard to say those words, because I obviously see how hard they’ve worked, even to get on the show; that already makes them winners, and I tell them so. These chefs are so talented, and they put their heart and soul onto each plate. Viewers don’t realize that doing it all for the cameras makes it even harder.

It seems like you and Gail Simmons — a Top Chef judge who is also a Jew from Toronto — should be friends.

A mutual friend introduced us years ago; our lunch was like a blind date that lasted five hours. We have so much in common; we went to the same camp and the same dance school and now we’re both on Top Chef. It’s a little crazy.

Did you always want to write a cookbook?

It was always a dream, but I didn’t know it was something I could do until recently. I had a pop-up a few years ago because I missed being in the kitchen and I was approached by a restaurant group and we opened DEZ, a contemporary Middle Eastern restaurant in New York that has since closed. I was very proud of it. That started my really wanting to share this food with more people.

You write that once you revisited Israel after attending culinary school, it was like tasting the food there for the first time.

I had visited Israel my whole life, and everything I experienced was what my family gravitated towards. But after I went to culinary school, I started looking at things differently, by seeking out restaurants that were new to me. I started asking about the different condiments and ingredients and spices and everything really shifted, also because I started appreciating food much differently. Also, the food scene there has really changed in the past decade. There’s a new kind of energy there, starting with Chef Eyal Sheni. Now you’re seeing all these stands popping up in the shuks with these young chefs making such amazing food, and the vegan and vegetarian scene, and Israeli wine, it feels as if the people there now take food much more seriously and of course they’re starting with such excellent produce already.

Israeli food has become one of the most revered cuisines in the world with the rise of Yotam Ottolenghi, Michael Solomonov, Einat Admony and more recently Adeena Sussman, and they’ve all put out such wonderful cookbooks. That’s a lot of pressure, no?

Ottolenghi is a huge inspiration, and there are definitely some incredible books out there. I love Adeena’s book and gravitate towards many of the same flavors. But just as when I was starting in TV, I got great advice that every network has heard every concept, but what really separates you is yourself. This book is 100 percent inspired by my travels and the people I love, with my own spin on the food. Also, I love food that is easy to put together. I’m a mother of a three-year-old, and I love a short cut. I get so much pleasure telling people I use canned chickpeas. It doesn’t need to be super fancy or high-end, it just needs to be approachable and delicious. These are every day Middle Eastern inspired dishes, not traditional, with a lot of North American influences. I just want Middle Eastern flavors to be a regular part of people’s lives.

Why do you think the Israeli food trend seems to have so much staying power?

It makes me so proud, but it also just makes so much sense. It’s plant-forward and colorful and vibrant and healthy and I always hear from people, ‘That’s the food I always want to eat.’ It makes sense that people are bringing these flavors and style of cooking into their home. Everyone feels good after they eat it. This food is here to stay, for sure.

With all of us cooking much more and making use of what’s already in our pantries more than before, what’s a recommended dish to make right now?

I made a conscious effort to have condiments that I absolutely love that I reuse again and again in the book, and same with the spices. For cooking from your pantry, the grain section is great; one of my favorites is a cracked freekeh salad that you dress up with pomegranate molasses, and you can garnish it with herbs from your garden or from the market. Spices that I reuse again and again also play a huge role in creating a lot of the flavor in my dishes.

What top five staple ingredients should we always have around to liven up any dish?