Why I Decided To Shave My Head — For Better Or Worse 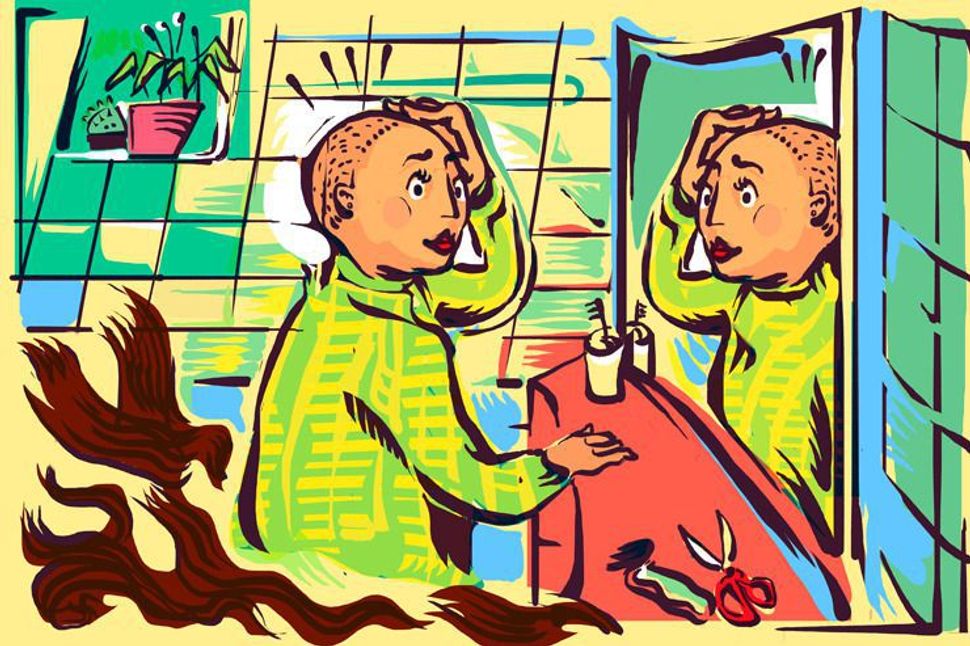 There’s a joke among Hasidim that a boy receives a prayer book in honor of his upsherin (at age three), and a girl receives one for her upsherin as well – when her hair is shaved after marriage.

One of the first questions that I asked a rabbi when I was considering marrying someone Hasidic was whether or not I needed to shave my head. The Hasidic rabbi replied that I didn’t since shaving is a custom, not a ritual law. But it’s well-known that Hasidic women shave their heads after the wedding, and all three other Hasidic bale-tshuve, newly religious Jews, that I know did it. (One of them is now serving jail time because she tried to kill her lover’s wife, but that’s another story). I was satisfied with the rabbi’s decision. When people asked me whether or not I planned to shave I answered that what was under my sheitel was my own business.

But once I was married and realized how unusual it was for a Hasidic woman not to shave, I was ashamed that I still had my hair. Truth is, no one would ever know whether I did or not because a married woman’s hair is always covered anyway, but my hair had a rebellious streak and would always make its presence known as a bump under my sheitel or snood. I often opted to wear a snood for comfort, and in a snood your hairline around the ears is always a bit visible. I was so embarrassed that the first year of my marriage I shaved the hair around my ears and at the nape of my neck so that it would appear as if I really was shaved. Never mind the bump.

Even though a Hasidic rabbi had said that I didn’t need to shave, my husband was always complaining that his wife went about unshaved. He used to make negative remarks about my hair or wistfully say: “Oy Mommy, when are you going to shave?” In college I had a mantra that I would try anything once, so after a while I thought maybe I ought to give shaving a chance. I asked my husband to do it and he did, happily.

I was not pleased with the results.

Every time I glanced in the mirror, the reflection staring back looked like a Holocaust survivor or a butch lesbian (not that there’s anything wrong with that but honestly, if I were a lesbian, I would have been a femme anyway, duh.) Yet I couldn’t stop looking at myself, each time struck by how alien and repellent it was. Like when you can’t tear yourself away from watching a horror film.

When I talked to a Hasidic friend of mine about my morbid fascination with my shaved reflection, she told me that she never looked in the mirror when her head was uncovered. No one would ever see her like that anyway, so who cares?

But I did care, and I didn’t shave again. At least not until many years later when we were looking for a shidduch, a match, for my stepson.

My stepson was considered a “very good boy.” That meant that he was on his way to becoming a Talmudic scholar; had wonderful character traits both with regard to religion and interpersonal skills and he was very Hasidish. We were deep in the middle of a shidduch with a girl that seemed like a perfect match but her mother wore an uncovered sheitel: no hat or scarf over the wig. Although, most Hasidim acknowledge that a woman who doesn’t cover her sheitel isn’t necessarily less pious than her peers that do, Hasidim generally believe that women who do cover their sheitels are on some higher level of modesty and consequently – more Hasidic.

Eligible young Hasidic bachelors often ask for a shidduch with a girl who’s prepared to cover her sheitel. My husband wanted to stipulate that the prospective kallah also cover her sheitel after marriage but felt uncomfortable requesting that the girl cover her sheitel, when his own wife didn’t even shave her head. I calmly replied that I was ready to shave again.

The second time I did it I was ready. More or less. Throughout the years I had become more used to the idea. I also thought that I wouldn’t be the best role model for my children if I didn’t shave and was embarrassed that I looked much more Hasidic from the outside than I really was, according to the community’s expectations.

As it turned out, shaving was easier the second time around. I wasn’t so horrified by my reflection.(Could be that with three children I had less time to look in the mirror). There are also some distinct advantages to not having hair:

Those are all the advantages I can think of. But did I feel holier? On a higher spiritual level? Not really, but I did feel really Hasidic, which had at one point been a serious goal of mine. I felt like a true member of the community. Maybe it was purely psychological, but I felt more accepted as an equal among other Hasidic women. I’ve always longed for a sense of community – something that’s missing among most Americans – and in shaving my hair I felt that I finally belonged to one.

Maybe if my marriage had been better, I might have lived the rest of my life with a shaved head; but I eventually separated from my husband and began to let my hair grow out again. I had forgotten how good it was to have hair (I look normal in the mirror! If my wig blows away no one would see I’m bald! I can comb and stroke my hair – yes, sensory goodness!)

I don’t believe I’ll ever shave my head again. But in retrospect, doing it (especially the second time) was actually a positive experience. During my years living among Hasidim, a part of me always felt like a bit of an anthropologist , even though I honestly aspired to be Hasidic. Through shaving, I was – albeit temporarily – able to finally eliminate the last markers of otherness, and experience Hasidism body and soul.

Why I Decided To Shave My Head — For Better Or Worse