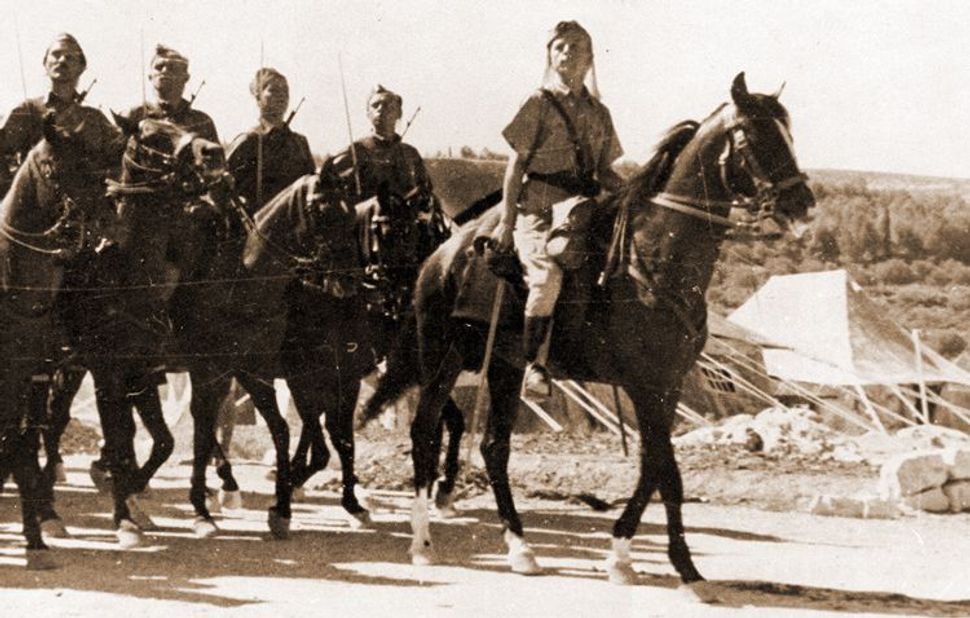 A new book describes a surprising phenomenon in Palestine right before the founding of the State of Israel: a burst of literary creativity by respected non-Jewish Polish writers who were stationed in Palestine during World War II.

In 1941, soon after Germany’s invasion of the Soviet Union, Stalin permitted the formation of a Polish army of Polish soldiers and officers, who had been sitting in Soviet prison and camps.

Hundreds of thousands of Polish citizens had been arrested by the Soviets after the Soviet Union and Hitler’s Germany divided Poland in 1939. More than 20,000 officers were shot and killed by the Soviet secret police in Katyn and other places, and the survivors were dispersed among prison camps across the vastness of the huge Soviet empire. Now, they were suddenly freed and received permission to leave the Soviet territory by way of Iran, where their troops became a part of the British army.

Through Iran, Iraq, and Syria, the Polish army led by General Wladyslaw Anders reached Palestine, where it was organized and trained. Select units from this army participated in military operations in North Africa and Italy, but a number of officers remained in Palestine until the end of the war.

Among them were famous Polish authors, like the poet Władysław Broniewski and the journalist Yuzef Chapski. As a result, between 1943 and 1945, pre-State Israel became an important center of Polish culture, with its own press and publishers. In total, more than 100 Polish publications were published there.

The little-known history of this blossoming of Polish creativity in Palestine is described in the book, “Polish Muses in the Holy Land. General Anders’ Army: Place, Time, Culture (1942-1945),” recently published in Russian by the Moscow-Jerusalem publisher “Gesharim”. Author Dr. Valentina Brio, a lecturer at Hebrew University, has been living in Jerusalem since 1990.

The book is made up of two parts, a historical survey and an anthology of memoirs, letters and articles from that era. While Poland suffered under German occupation, and Polish culture in the Soviet Union was strictly controlled by the Communist leadership, Israel, on the other hand, provided an oasis. Polish authors, who had come here with Anders’ army, found a Jewish audience here that was very curious about, and appreciative of their work.

Brio describes one remarkable episode: Broniewski was invited to recite his poems in a kibbutz, and in the middle of the reading, the electric generator suddenly malfunctioned. Broniewski said that he couldn’t continue since he didn’t know his poems by heart. A girl in the audience cried out: “Comrade Broniewski, don’t despair. I can finish your poem from where you left off!” Struck by the devotion that many Jews expressed in Polish literature, Broniewski later reminisced: “Where else could this have occurred? And with whom?”

Interestingly, Broniewski even learned how to recite his poems in Yiddish.

Before the war, Broniewski had made a name for himself as a “Polish Mayakovsky,” a fervid Communist sympathizer. Despite that he was arrested by the Soviets and accused of espionage. After gaining his freedom, he left the Soviet Union with the Polish army. While In Jerusalem, Broniewski served on the editorial board of the Polish newspaper “Wu Drodze” (In the Way), where he published his poems.

As Brio demonstrates, the Polish poets drew their metaphors, imagery, and symbols from Israel’s scenery and way of life. Polish literature has a tradition of praising and lamenting the Polish exile, dating back to the eighteenth century, when Poland lost its independence and many Poles migrated to Western Europe. Israel had now become a new stop for Poles on their long journey away from their homeland.

The Jewish overtones are obvious. Just as the Jews spent hundreds of years exiled in Poland, the Poles now endured their own exile in the Jewish Promised Land. In 1943, Broniewski lamented in his poem series, “Jerusalem Poems”: “I came here to cry, Jews, / to the Western Wall.” At one point, a prominent group of Jewish authors in Tel Aviv even organized an evening of poetry in honor of their Polish colleagues, where the renowned Hebrew poet, Shaul Tchernichovsky, gave a rousing speech praising Polish literature, and a selection of Polish poems was recited in Hebrew translation. For the Poles, Brio writes, this was as an “expression of the ardent support of Poland on the part of the Jewish intelligentsia.”