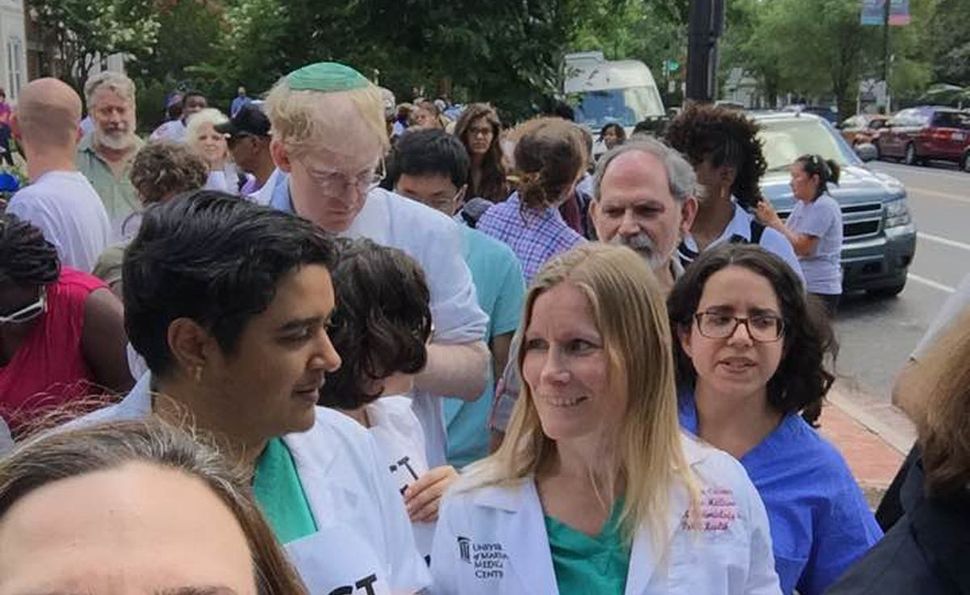 I stood, legs apart and face to the wall, in the Capitol Police Vehicle Maintenance Division. In other words, a garage. And I thought: I want to shake the hand of the person who invented plastic zip ties. They’re probably doing extremely well for themselves.

But let’s start from the beginning. How did I get here, hands cuffed behind my back, and why did I still feel, all in all, pretty good?

I’m a doctor who’s been in practice almost 10 years. During my training I wasn’t that involved in politics, and after 2009 even less involved. I was complacent after Obamacare passed.

In the following years it became evident that more and more patients were able to seek me out and start seeing me as their new doctor because of the insurance available through the Affordable Care Act. Sure the legislation wasn’t perfect. Everything can always be improved. I even rolled my eyes and acted supercilious at those who wouldn’t shut up about single payer. Why rock the boat? Then Trump happened. During the run-up to the election I understood the abstract possibility that he could win. Though I’m certainly no prophet and I didn’t come near to predicting what eventually happened, I was really worried that a President Trump would wipe out the progress of the past few years: the millions more Americans with insurance; the decrease in the rise of healthcare costs, the improvements in population health.

I was shocked in November, and after the inauguration it was as if I had woken up from a long nap. With mounting fear and panic I understood that the priorities of Trump and his Congress collaborators are different from mine, and those of my doctor and nurse colleagues — and certainly different than what my patients think is important. Many Republicans believe that government should not help the sick, because being ill is a moral failing. The sick need freedom to cure themselves.

As a response, I founded a social media group called Doctors Against Trump which later, with the help of expert friends, I converted to a political action committee to support candidates who believe in progressive health policies. I started calling my Congressmen and Senators regularly,  and I made use of various on-line tools that connect blue-state voters with red-state constituents, urging them in their turn to call their elected officials.

This was something, but it didn’t feel like enough to me. I wanted to physically and concretely demonstrate support for my patients (sick, weak, old, marginalized), that I wasn’t sitting doing nothing while people were trying to take away their insurance. Once or twice I went and had a polite discussion with a senator’s health aide. That didn’t hit the spot either.

I saw that two separate groups were collaborating in a Senate protest action: those from various faith traditions (priests and ministers, rabbis, ordinary Jews and Christians; probably others too), on the one hand, joined also by health professionals: doctors, nurses, dentists; together with patients ready to tell moving stories for an audience and media. I joined them on a sunny morning in Washington, DC, at a Lutheran church not far from the Capitol and Union Station.

First we joined in prayer (as a Jew, I was happy that specific Christian expressions were deliberately avoided, and no one invoked Jesus’ name). I put on tefillin as a sign of serious piety in the public sphere defending the principle in the Biblical verse “you shall surely heal.” I was also thrilled to meet doctors and others who I had met before only on social media.

After a press conference at which we forcefully articulated our belief, as religious people and doctors, that health is a human right, we started off in a long, stately procession, slow and steady, to the Capitol building, two by two.

Good things come to those who wait, and protesting is no exception. They let the tourists up to the Senate galleries quite quickly, but apparently it was obvious to everyone that we were planning something different.

We finally got to the gallery, looking down at the Senate. It was like a Kabuki theater, Democratic and Republican statues frozen in their feigned gravity while true realities of life and death play out on the other side of the Capitol walls. When the number of the bill was called, we stood up and shouted, “Kill the Bill! Shame!”

Though we don’t yet know, while I write these words, if the terrible bill is truly dead, I am very happy with our work. We used our privilege as doctors and bearers of faith to march against the greed and cruelty of an unfeeling administration. As part of a group of activists I felt the collective frisson that many Jews have experienced in a minyan that davens with intention: the surety that all is not lost even when the hour is very dark. We are powerful precisely because we maintain, even under attack, our beliefs in healthcare and the needs of patients.

So maybe that’s why, when I stood feet apart in the police garage, the zip ties didn’t bite as much as I thought they would.