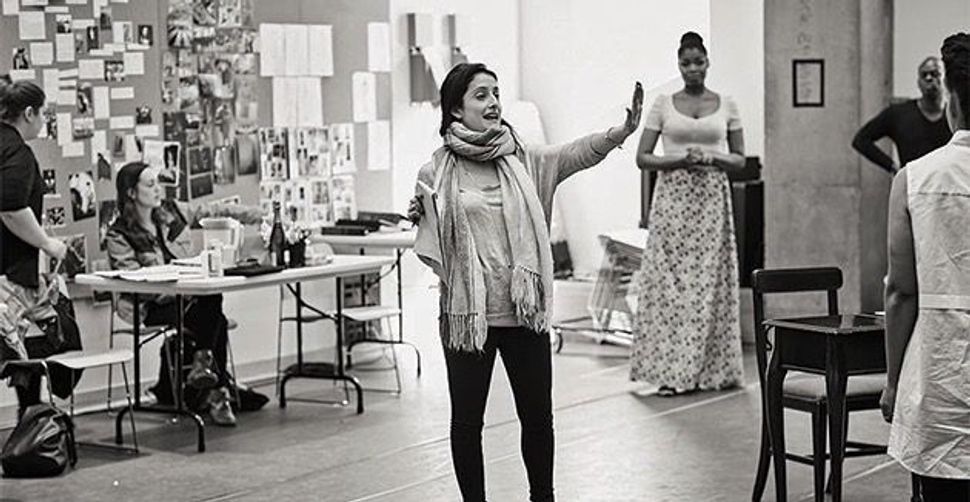 Lila Neugebauer is constantly busy these days. For several years now the award-winning 32-year-old Off Broadway director has been working on between five to seven plays a year, not to mention smaller projects on the side.

Her resume includes collaborations with Karen O, lead singer for the indie rock band “Yeah Yeah Yeahs” and actress-playwright Zoe Kazan, who also happens to be one of her best friends from Yale, where they were both undergraduate students.

This fall, she’s directing two plays: Kazan’s post-apocalyptic “After the Blast”, and Sarah DeLappe’s play about a girls’ soccer team, “The Wolves”.

Dining with her at the Indie Food & Wine restaurant at Lincoln Center, where she’s busy casting for a new play coming out in the fall, we also discussed her Yiddish cultural lineage: she’s the granddaughter of former Forverts news correspondent Mayer Rak, who passed away in 2004.

“My grandfather’s life as a writer has always inspired me,” she said.

She remembers her grandfather sharing the story of how he, a mere 12-year old boy in Warsaw, met the Yiddish novelist Sholem Asch. Because of his writing skills, her grandfather had been chosen among all the students in his folkshule [Yiddish day school], to interview the great Yiddish writer.

The young Mayer “left his Jewish neighborhood for the first time and walked to downtown Warsaw. He had never seen such tall buildings and real sidewalks. He found the Hotel Bristol, which had recently been completed and was the most elegant in Warsaw. He rode in an elevator for the first time. The hotel was a marvel: all velvet, gold and marble. Asch’s valet opened the door, and my Zaydie was introduced to this great man, the most internationally famous Yiddish writer. Asch greeted him wearing a silk dressing gown and cravat, smoking a cigarette in a long holder.”

“That meeting made a huge impression on my grandfather,” Neugebauer remarked. It wasn’t until years later that he learned that Asch’s supposedly luxurious lifestyle was all an illusion, but at that moment he had a life-changing thought: “The writer’s life, that’s for me!”

“I’ve always been intensely moved by this story,” she says. From time to time she wonders what her grandfather would have thought of her work. The image of him as a young writer who gradually realized what it truly means to lead the life of a writer was solidified in her imagination and became a part of her family mythology.

Neugebauer grew up on the Upper West Side of Manhattan. She attended the elite Hunter High School, and later at Yale directed plays in the University’s small theaters.

Growing up she remembers always being surrounded by discussions of literature, the arts and big ideas. Her mother used to take her to the theater. When she was 12 she saw a production of Macbeth, performed outdoors. The experience left a deep impression on her. But she was struck even more by the plays she saw in college, and during the decade since she’s been back in New York. Those plays inspired her to direct new American plays. Also influential were the works of French avant garde director Ariane Mnouchkine.

Although Neugebauer directs mostly Off-Broadway dramas, she’s in the process of developing some musicals as well. One is with Karen O, with whom she had previously collaborated in the musical drama, “Stop the Virgins”.

Another musical she’s been working on is an adaptation of Jon Krakauer’s book “Into the Wild”, about a young man from a well-to-do family who leaves his comfortable existence to embark on a long adventure in the wild. (Sean Penn turned it into a film in 2007).

The director doesn’t think she’ll be leaving New York any time soon. “This is where my primary collaborators live and work,” she says. But at some point, she would like to try London, being the Anglophile that she is. She says that she would consider living in LA for a while, maybe get involved in film or television.

But how relevant is theater for young people today, competing as it does with the instant accessibility of entertainment in digital formats? “I’m constantly reflecting on the challenges of working in an increasingly rarified form, and it certainly doesn’t help that theater tickets are so expensive,” she explains.

And yet, she adds, “when you assemble a group of strangers to share a transformative experience, you create a temporary community. The value of that ephemeral phenomenon is singular, vital, and enduring.”

“If young people aren’t going to the theater, yes, it has a great deal to do with cost, but it’s also a consequence of the underrepresentation of many populations onstage. It’s the responsibility of those making theater to ensure that it remains relevant and immediate for new generations. Like all art forms, theater has a responsibility to reflect the world in which we actually live. People of all backgrounds need to see themselves — their concerns, their experiences, their narratives — reflected back at them from the stage.”