I’m sitting here listening to the recorded voice of my Uncle Yoyne z”l as he leads the Passover seder in 1962… and I’m kvelling.

Yoyne Gottesman and his wife Bella. Image by Courtesy of Itzik Gottesman

Yoyne Gottesman was a secular Jew, or as we used to say in those days, a veltlekher yid. He didn’t keep kosher or the Sabbath, which is why his family could tape-record the seder. But as you listen to him reciting the holiday kiddush, or the Ho Lakhmo Anyo [the declaration inviting whoever is hungry to come and eat] or the Ekhod Mi Yodea, the lively song enumerating common Jewish motifs, you’d think he was an Orthodox Jew wearing a kitl, the white robe traditionally worn by married men at the seder. He chants the haggadah using the same moving niggun throughout the text, in his lovely baritone, and as he does so, the Hebrew and Aramaic words fly by so fast that it’s often hard for me to discern where he is on the page. But that’s exactly why it sounds so natural.

(You can hear Yoyne Gottesman leading the seder here. The first 30 seconds are barely audible but afterwards, you can hear it better.)

Like many Jews of his generation, my uncle was raised in an observant home. His family lived in Siret (pronounced Seret in Yiddish), in the Bukovina region of Romania, and he apparently remembered the way it was sung by his father, Khayim, who prayed both with the Vizhnits Hasidim and with the Sadegerer.

His son, Itzik Gottesman, told me that when Yoyne was a boy, his father had hired a tutor to teach him Talmud because there was no yeshiva in Seret. Even years later, after Yoyne had become a physician and was no longer observant, any time he visited his parents, his father would hire a Talmud tutor for him.

But Yoyne was far from an anomaly. Forverts writer Miriam Hoffman says that her late husband, Mendl, also a secular descendent of the Vizhnits Hasidim, led a traditional seder as well. Having lost both parents, his 12-year old younger brother, Binyumele, and three sisters to the gas chambers, Mendl had completely renounced his faith, even commanding his wife never to keep the Sabbath or kosher, out of rage towards God. Yet on the first night of Passover, he donned a yarmulke and conducted a traditional seder in Hebrew and Aramaic. 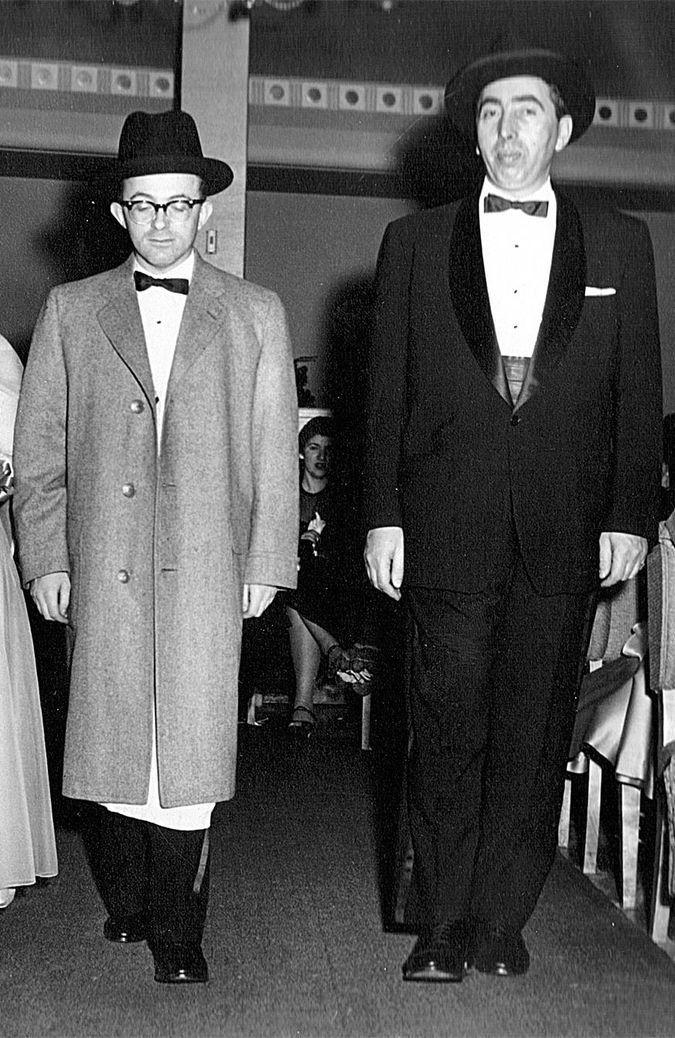 Image by Courtesy of the Schaechter family

My father z”l did the same, even though – unlike Yoyne and Mendl – he was not raised in an observant home. It wasn’t till he was an adult that he learned how to lead a traditional seder (probably from Yoyne, his brother-in-law), because he wanted his children to experience a seder the way their great-grandparents did.

In other words, it was then common practice for someone who considered himself completely non-religious to lead, at least once a year, a private religious ceremony, even one that was three hours long, and despite the fact that it mentions God throughout the text.

An atheist might ask: What’s the point of reciting blessings and engaging in religious rituals that you don’t believe in? Isn’t that completely inconsistent with one’s beliefs? My father, for example, always made kiddush and hamotzi on Shabbos so effortlessly I was sure he was a believer. When I began, at age 17, to explore my own spiritual path and tried to engage my father in a discussion about it, he suddenly exclaimed: “Why are you asking me all this? You know I’m an atheist.”

“You are?” I asked incredulously. “So why were you making kiddush and hamotzi all these years?”

For years I contemplated what he meant by that phrase, “for you”. That he himself didn’t derive any pleasure in it? That it was just a way to improve the chances that his kids would identify strongly as Jews?

Looking back now, it seems to me that there were several reasons why these three secular Jews (two of them – principled atheists) and many others of their generation, were willing to conduct a religious seder.

First of all, as my father said, they did it for their children. After all, the haggadah expressly commands us to tell our children what happened to us when we were slaves in Egypt.

And yet, if that was all there was to it, they could have simply told the story of how the Jews were freed from slavery, without mentioning God at all. They could have used one of the secular haggadahs once produced by and used in the Yiddish school system like the illustrated Workmen’s Circle haggadah.

Yes, there was a pile of secular Yiddish haggadahs on the seder table which we used to help us with the lyrics while singing beautiful songs like Avrom Reisin’s “Afn nil” [On the Nile], Dovid Edelstadt’s “Inem land fun piramidn” [In the Land of the Pyramids] and Yitskhok Lukovsky’z “Khad Gadyo”. But these non-religious haggadahs was just a supplement to the seder, not the seder itself.

If so, their intention was deeper that just transmitting the story of the Jews’ escaping slavery in Egypt. It was also an opportunity to show the younger generation just how rich and deep the millennia-old Jewish tradition is; that the Yiddish which they taught us was not just a language but an entire culture steeped in religious knowledge; that Jews need to be familiar, or at least comfortable with the religious aspect of the Jewish tradition, even if they themselves aren’t observant.

As for me, I’m thrilled that Itzik Gottesman has kept this recording of his father. Now I – and anyone else – can learn how seders were conducted by the Jews of eastern Europe, giving us an opportunity to enrich our own seders on Passover night.