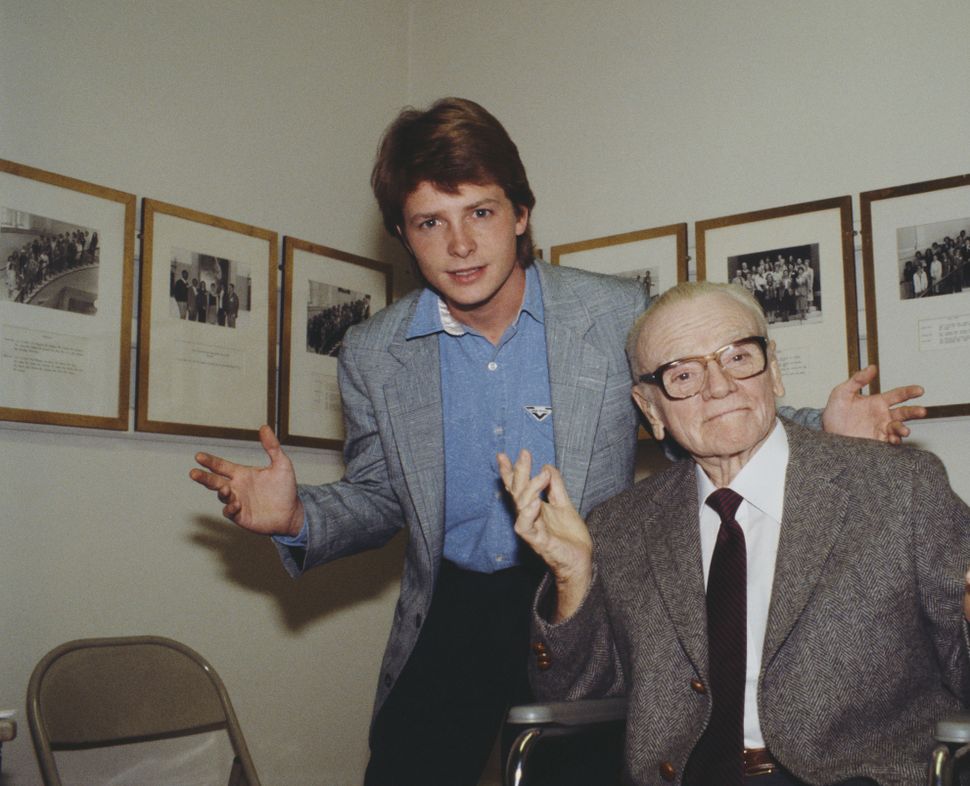 Continuing my irregular series on non-Jewish American celebrities who spoke Yiddish I would be loath not to mention one of Hollywood’s most charismatic film stars of all time, James Cagney.

Cagney, best known for his portrayals of tough guys in gangster films, crime dramas and war epics, learned Yiddish as a child on the Lower East Side, where he lived with his Irish-American parents in a largely Jewish tenement.

Cagney had a famously tense relationship with Warner Brothers, quitting and rejoining the famed film studio several times over contract disputes. According to Hollywood lore, Cagney’s Yiddish came in hand during his first dispute with Warner Brother’s immigrant Jewish founders. When two of the studio’s owners began discussing how to change a clause in Cagney’s contract in Yiddish, their star supposedly shocked his bosses by cursing them out in their native language. In a related alleged incident, one of the Warner (née Wonskolaser) brothers warned a colleague about to meet with Cagney that “der goy farshteyt yidish” — this gentile speaks Yiddish.

Cagney’s unexpected Yiddish skills were incorporated, at his bosses’ suggestion, into two of his films, “Taxi!” and the World War I drama “The Fighting 69th.” In “Taxi!” Cagney plays Matt Nolan, a taxi driver who is embroiled in a gangster-like war against another group of taxi drivers who use strong-arm tactics to steal passengers from him and his colleagues. Before the film turns into an extraordinary bloodbath — wildly, the production used live machine-gun fire for authenticity — it begins with a comic exchange in Yiddish that introduces its main character’s softer side. Matt, an Irish-American from the Lower-East Side, is shown approaching a bizarre scene in which a well-dressed Jewish man is berating a perplexed Irish-American cop in his native Lithuanian Yiddish. After laughing at the interaction for a minute Cagney’s character intervenes, offering the man a ride in Yiddish, shocking both the cop and the Jewish man poking at his badge.

As the film does not translate any of the dialogue through subtitles I thought it would be prudent to give a summary for those who don’t understand Yiddish. In short: The man tells the policeman that he urgently needs to go to Ellis Island because his wife and children are due to arrive and becomes incensed that the cop cannot understand his “plain Mame-Loshn.” After insulting the cop, calling him fat and a dummy — literally: a “gentile head” — the Jewish man asks Matt if he is a fellow member of the tribe. “What else would I be, a sheygets?,” Cagney’s character responds. (Sheygets is the male equivalent of a shiksa.)

While this great bit of intra-Jewish humor was lost on the general American audience, the scene does end with a great line in English poking fun at Cagney’s Lower-East Side, Irish-American, Yiddish-speaking childhood. “Nolan, what part of Ireland did your folks come from?” asks the cop. “Delancey Street, thank you!” responds Cagney.

Only in New York!