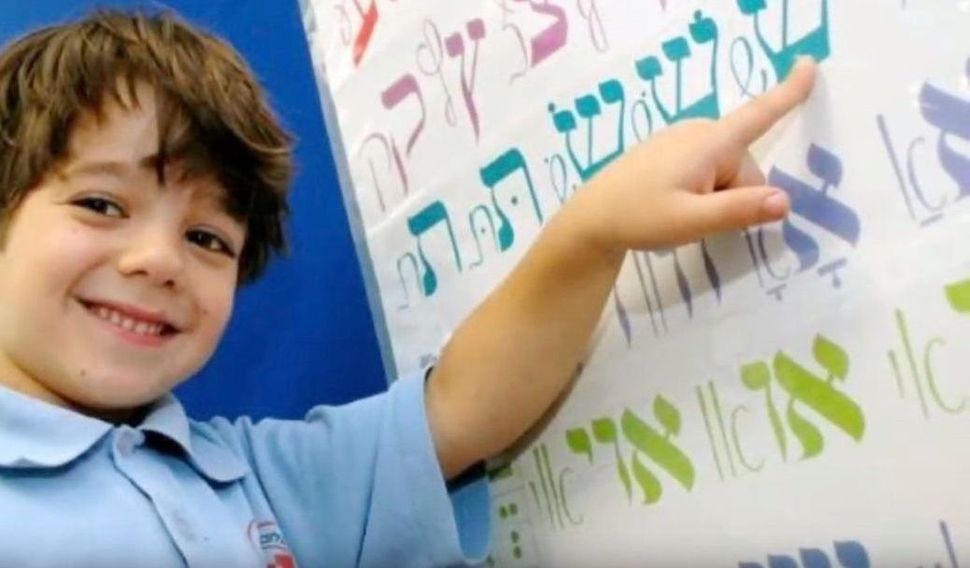 More than 40 years ago, ten families founded a Yiddish day school in Melbourne with just 10 children in attendance. Today, Sholem Aleichem College (known simply as “Sholem”) has 300 students and remains the only secular day school in the world where Yiddish is a required daily subject.

Despite a torrential downpour, dozens showed up at a workshop in midtown Manhattan to hear two young teachers at the Melbourne Yiddish day school, Dvora and Reyzl Zylberman, speak about the importance of Yiddish education for children. The workshop was organized by the Manhattan Workmen’s Circle School in partnership with the League for Yiddish 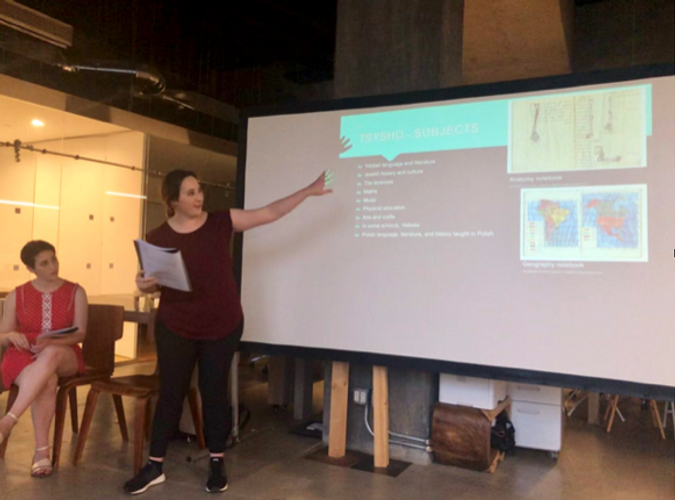 The Manhattan Workmen’s Circle School and the wider New York City Yiddishist community used this rare opportunity to exchange ideas and best practices with a successful secular Yiddish school from Ek Velt – the end of the world, as Australia is sometimes called in Yiddish.

The Melbourne I. L. Peretz Sunday School was established in 1935, followed by its sister Sunday school, Sholem Aleichem, in 1947. These Yiddish schools were inspired by the socialist Tsysho school system of pre-WW II Eastern Europe, which at its peak enrolled 24,000 students across 100 locations. The teachers were trained in modern pedagogical methods at the Vilna Teachers’ Seminary, another important institution in the history of secular Yiddish education. Yiddish educators Genia Wasserman and Yosef Giligich, who attended the seminary, later immigrated to Melbourne to teach in its schools.

These transplanted leaders of the Tsysho school movement believed that for children in Australia to have a truly Jewish education, there was no substitute for a Yiddish day school. They saw their dream realized when Sholem Aleichem College opened its doors in 1975.

“Sholem Aleichem College in Melbourne is something of a miracle,” said Sheva Zucker, Executive Director of the League for Yiddish and an instructor at the Workmen’s Circle Yiddish language program, who was invited to Melbourne twice to work with teachers at the school. “At a time when Yiddish day schools were closing all over the world, this community managed to start a Yiddish school. It’s not, however, a total mystery. In relation to the general Jewish population, Melbourne claims the highest proportion of Holocaust survivors of any city in the world. Many members of the historic Jewish Labor Bund, or Bundists, from Eastern Europe also settled there and worked to recreate their homeland institutions on new soil. Because mobility in Australia is much less than in American cities, family units are stronger and the language manages to live longer within the family unit.”

What does a school built by Yiddishists, Bundists and Holocaust survivors look like today? Melbourne Jews are a tightly knit community who still live within a twenty-mile radius. The community includes second and third generation Holocaust survivors along with many Israeli families. Additionally, several Orthodox families chose the school because of its inclusivity and its Jewish studies curriculum encompassing both Yiddish and Hebrew languages. Dvora and Reyzl Zylberman described an Indigenous father of two Jewish-Indigenous girls who was adamant that his children learn Yiddish, because his own language is now extinct.

The 100 children that attend the Sholem kindergarten today have Yiddish classes integrated into their general studies curriculum. In the primary school, 190 students ages 5 to 12 continue their Yiddish and other Jewish studies classes that are conducted in Yiddish and use Yiddish texts. Additionally, high school Yiddish classes are offered in Sholem’s afterschool program. Yiddish is integrated in all areas of school life: all signs are in Yiddish and English (even in the bathrooms), grades are sent home in both languages, and the school teams are named after notable Yiddish writers Kadya Molodowsky, Avrom Reyzen, Mani Leib and I. L. Peretz). Each year, the school holds a celebration for Sholem Aleichem’s birthday during which kids dress up as their favorite Sholem Aleichem characters. The holidays are celebrated from a secular perspective with a focus on Jewish peoplehood and Yiddish culture, and there is a b’nei mitsve program in which children read the Torah portion with a completely secular interpretation. Students graduate from Sholem with the ability to read, speak, and write in Yiddish with confidence. 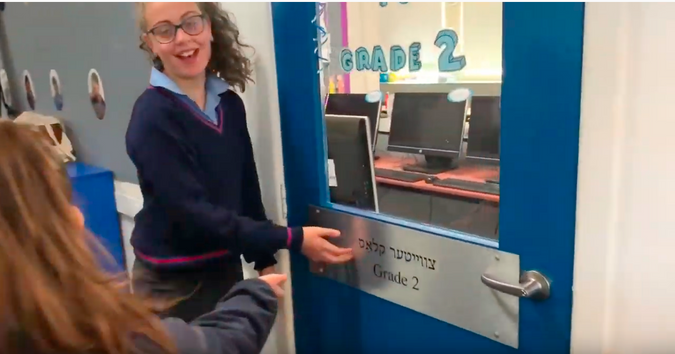 Most importantly, according to Reyzl and Dvora Zylberman, Sholem Aleichem College doesn’t just teach Yiddish, it inspires students to love the language. Given that children begin to learn it at an early age, they grow up experiencing Yiddish as a thriving language. Many graduates become acclaimed members of the Yiddish and wider Australian community, famous singers, writers, journalists, actors and artists. Alumni include David Slucki, Yvette Coopersmith and Husky Gawenda to name a few.

The discussion with the two young Yiddish teachers was an opportunity to celebrate the work of Yiddish educators around the globe. “Where did the Manhattan Workmen’s Circle Shule teachers once learn Yiddish?” commented Yiddish teacher Paula Teitelbaum, who was invited to lead a two-week seminar with Sholem’s nine Yiddish teachers in June 2018. “Who provided the bridge to their heritage for the generation of young people deprived of a Yiddish-language environment? Stubborn, committed culture-bearers in both communities are responsible for attracting young people and inspiring them to learn and use the language.”

Today’s teachers at the Manhattan Workmen’s Circle School include Judith Bro Pinhasik, who learned Yiddish over 18 years in the Jewish People’s Philharmonic Chorus, Yugntruf and private classes, cooking and culture teacher Michelle Miller, who grew up speaking Yiddish in a Chasidic home; and Mina Natanzon, who has studied Yiddish at YIVO summer program and at Yiddish Vokh. This fall, Manhattan Workmen’s Circle School welcomed onto its staff Esther Gottesman, granddaughter of Yiddish poet Beyle Schaechter-Gottesman, who grew up speaking Yiddish at home.

This includes creating and sharing new materials to educate the next generation of Yiddishists. Manhattan Workmen’s Circle teacher Deborah Strauss, who visited Sholem a few years ago, commented that “both schools produce a lot of their own materials, since there is so little out there that fits their curricular needs. For instance, Melbourne has created many short, simple storybooks in Yiddish.” The New York’s League for Yiddish, based in New York, recently released a new edition of Sholem Aleichem’s Motl the Cantor’s Son (abridged and adapted for students by Sheva Zucker with exercises, glossary and audio recording) especially for Sholem high school students.

For Josh Fraidstern, a Manhattan Workmen’s Circle School parent who attended the workshop, the Yiddish language is a key part of passing along a Jewish cultural inheritance rooted in a struggle for justice. “Yiddish is the language of the Socialists, Bundists and others who faced and fought the evils of the past. As we face the resurfacing of many of those same evils, I want my children to connect today’s movements with those of earlier generations.”

“Not teaching my son Yiddish and its significance would be depriving him of a part of his soul,” said parent Evan Kleinman, who grew up with Yiddish-speaking grandparents who were immigrants, refugees and Holocaust survivors.

At the Manhattan Workmen’s Circle School, children had the chance to see and hear from kids tens of thousands of miles away who are immersing themselves in Yiddish culture. When Deborah Strauss visited Melbourne, they created a video of the Sholem kids singing “Ale Brider” and shouting the Yiddish greeting, “Sholem aleykhem!” to the students in Manhattan. Time zones were the only barrier preventing them from hearing an immediate traditional response: “Aleykhem sholem!” in reply.