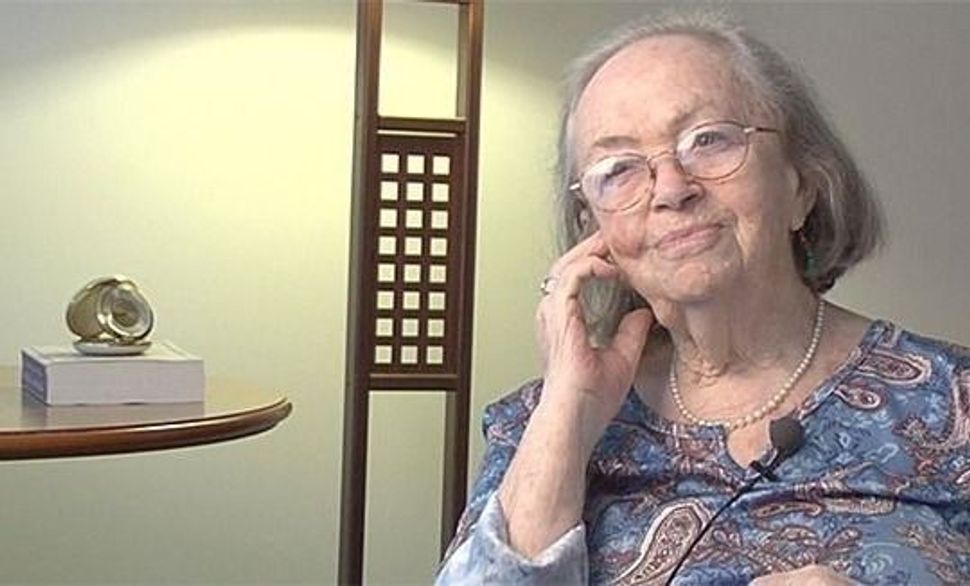 A documentary film about the life and work of Yiddish poet, singer and painter Beyle Schaechter-Gottesman will be screened in three countries, starting January 28th.

Beyle, the Artist and Her Legacy, which was directed by Christa Whitney and Liz Walber, explores the poet’s work and its impact on younger generations of Yiddish poets, singers and visual artists. The film was created under the auspices of the Yiddish Book Center’s Wexler Oral History Project, of which Whitney is the director.

In Beyle, the Artist and Her Legacy, we hear not only from Beyle Schaechter-Gottesman herself but also from her son, folklore researcher and and Forverts columnist Itzik Gottesman, and her granddaughter Esther Gottesman. The film includes Beyle singing at concerts and images of her visual art alongside interviews with visual artists, Yiddish singers, and poets, whom Scaechter-Gottesman’s work impacted.

Raised in Czernorwitz, Romania, Schaechter-Gottesman grew up singing Yiddish folksongs with her mother Lifshe. After surviving the war she immigrated to America with her mother, brother (the linguist Mordkhe Schaechter), husband Jonas and daughter Taube. The family served as the nucleus of a Yiddish-speaking community in the Bronx centered around Bainbridge avenue, where Schaechter-Gottesman would live for the rest of her life.

Besides eight volumes of acclaimed poetry, Schaechter-Gottesman recorded CDs of both traditional folksongs and her own works. Her songs have been covered by dozens of Yiddish singers including Theodore Bikel, Adrienne Cooper, Lorin Sklamberg, Michael Alpert, Theresa Tova and Lucette Van Den Berg.

The film will be screened in the following locations. To organize a screening email tellyourstory@yiddishbookcenter.org .

Montreal, Canada: The film will be screened on April 30th, 7:30 PM at the Jewish Public Library of Montreal. Sebastian Schulman, the director of Klezkanada, will lead a panel discussion about the film with Christa Whitney and Esther Gottesman.