Why I, a Turkish Muslim, collect postcards about the Holocaust

Sometimes, even minor decisions can change your life.

For me, one of these decisions was to start collecting postcards; more specifically, postcards related to the Holocaust. This might not have been unusual if I were Jewish, but I was raised in a Muslim Albanian home in Turkey, where most people are not familiar with Jewish history, its culture and the Holocaust.

It all started when my cousin made me watch the movie, “The Pianist”, nine years ago when I was 13 years old. This movie affected me deeply. I couldn’t understand how a community could do this horrible thing to their brothers and sisters. I asked my mother but she didn’t know much about it either, because we are not taught this history at school. I did a basic search on the internet but there were almost no sources about this in Turkish. Most of the information was in English. So I decided to learn English. Then I found Turkish sources on the website of the United States Holocaust Memorial Museum and that helped a lot.

I’ve had both bad and good reactions from people around me to what I was doing – and I still do. I was excluded and even accused of being a bad person because I was interested in Jewish history and culture. When it became dangerous for me, I started to read my books in secret.

But many people liked what I was doing, because it was so unusual. Some of my friends and teachers started asking me about the Holocaust because until that time they had always been told only negative things about the Jewish people, and that encouraged me even more, because I was glad to see how people were starting to see what discrimination could lead to.

Soon my mother and sister also got interested in Jewish culture and history and we started talking a lot about history in general. I improved my English in high school and soon I was reading lots of articles and books, watching many documentaries and the testimonies of survivors. It’s still impossible to find books about the Holocaust in Turkey, though.

By doing these searches I also started learning about the history of the Jews in Turkey which is taught just a bit at school. The more I read, the more I realized that Turkey has a strong Jewish history. For example, during the persecution of the Jews in Spain in 1492, many Jews found a home in the territories of the Ottoman Empire and lived with their neighbors in peace for hundreds of years.

Also, during the Holocaust, many Jews were saved by two Turkish diplomats: Turkey’s consul on the island of Rhodes, Selahattin Ülkümen, saved 50 Jews, while Necdet Kent who was vice-consul in Marseilles, France between 1941 and 1944 gave documents of citizenship to dozens of Turkish Jews living in France to save them from deportation to the Nazi gas chambers. Turkey even issued several stamps to commemorate these diplomats who are now recognized by Yad Vashem as one of the ‘’Righteous among the nations’’.

When I was 17 years old, an Israeli friend of mine sent me a postcard of Yad Vashem. I decided then to start collecting postcards related to the Holocaust but since postcards are not popular anymore, I’ve had trouble finding them. 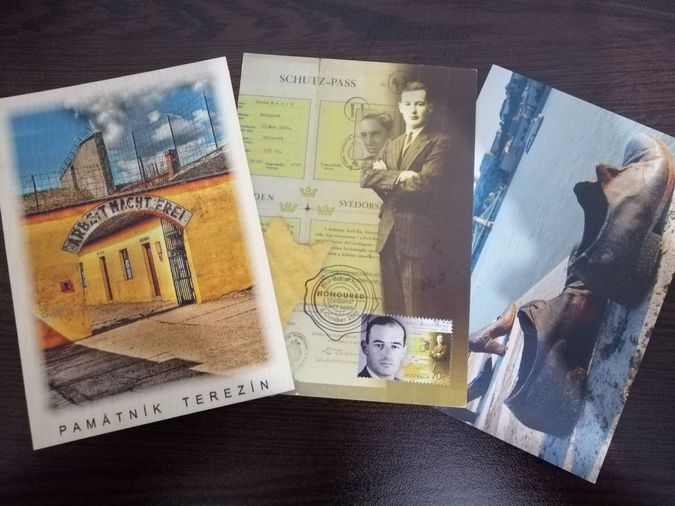 Then, last summer, my best friend and I decided to travel through Europe with our backpacks. While I was there I saw so many Holocaust memorials and also I found many Stolpersteiner, those concrete cubes with brass plates on them inscribed with the name and life dates of victims of Nazi extermination or persecution. Whenever I saw one, I stopped to read it carefully and to snap a picture of it. I felt many people staring at me when I did this. They probably had no idea what I was looking at or why I was taking photos.

When I was in Amsterdam I couldn’t wait to see the Anne Frank House. I have some cards of Anne Frank and the house and have read her diary three times. It was a dream of mine to go there. Sadly, I couldn’t get in because there were a huge line, and I had to catch a plane. But before I left I touched the house’s walls with my fingers and thought about Anne and the other people who lived with her.

Ever since I started studying the Holocaust, visiting Poland became a dream for me. Just before the pandemic, my school organized a visit to Lublin, Poland for a week. I knew this would be a great way to augment my Holocaust studies and also increase my postcard collection. Majdanek was in Lublin and the city protected its history well. While I was walking on the streets, I couldn’t stop myself from touching the walls, especially the houses in the old town, because they were the same ones that had stood inside the ghetto. There was Jewish history in every building and on every single street. There were large photos on the windows of these houses in the former ghetto and the faces were those of people who had once lived in those houses, later to be murdered by the Nazis.

I managed to find a postcard showing Majdanek in a souvenir shop, but I felt I should visit Majdanek itself. Visiting an extermination camp for the first time was very hard. The tour guide was giving us all the details and he was surprised that I knew almost everything he spoke about.

As I walked around the town, I looked for a shop that might have postcards, because I felt this would be a great way to tell more people about the history of the Holocaust. Finally I found a souvenir shop with cards showing every site in the camp. When I bought some for my collection, the storekeeper seemed surprised because they had never met anyone who was interested in those postcards. But I still feel this is the best way I can share my knowledge with others.

I have two goals right now. One is to visit Israel, especially Jerusalem and the Yad Vashem Holocaust Museum. I’d also like to learn Hebrew and Yiddish, but I know they are hard languages to learn so in the meantime, I listen to songs like “Hatikvah” and “Jerusalem of Gold” and watch the Forward‘s daily YouTube, “Yiddish Word of the Day”.

My other goal is to visit the United States Holocaust Memorial Museum and even work as a volunteer there. Unlike countries like mine, the U.S. does a lot to make sure that the Holocaust memory is kept alive.

Why I, a Turkish Muslim, collect postcards about the Holocaust