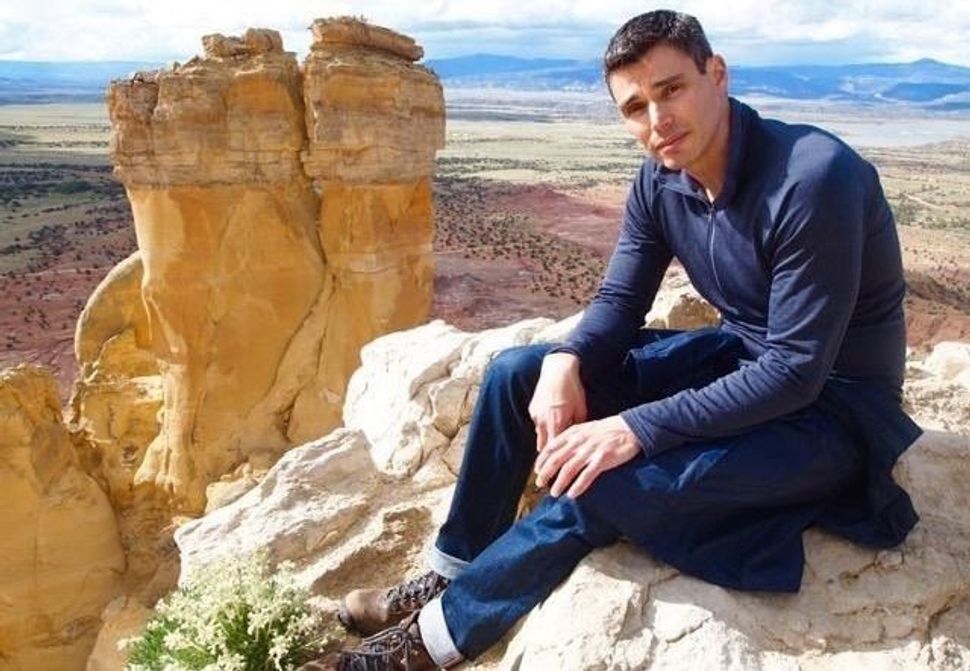 Image by Letters from Cloudcroft

David Shneer, a widely admired history professor and director of the Program in Jewish Studies at the University of Colorado Boulder, died November 4 in Denver of brain cancer. He was 48.

Shneer was one of the liveliest people I’ve ever known, and his premature passing means that this bright figure will always remain young, vivacious and energetic in my memory. He was at the vanguard of a younger generation of Jewish Studies scholars who didn’t hesitate to challenge orthodoxies in the field regarding Jewish life under communist rule.

Shneer came to Yiddish through his academic research when he began studying Russian history at the University of California, Berkeley. His grandparents were originally from Russia but were fully assimilated, “with no trace of a Yiddish accent in their English,” as he told the Yiddish Book Center in an interview in 2010. His PhD thesis, which was later expanded and published in book form, Yiddish and the Creation of Soviet Jewish Culture 1918-1930 explores the apex of Yiddish culture in the USSR before the Stalinist purges of the late 1930s.

Shneer was among the first scholars to gain access to the Soviet archives, most importantly: the archive of the Moscow Yiddish newspaper, Der Emes (i.e. Pravda, The Truth). This rich source of information allowed him to research Soviet Jewish history through a new methodological approach. Shneer was keenly interested in the internal dynamics of Jewish cultural activity and the intentions and approaches of those producing it. The book was revisionist in nature, revealing a scholar freed of the ideological confines of the field during the Cold War, which viewed Soviet Jewish culture solely as a product of the Communist party

Shneer believed that “Yiddish is never just Yiddish.” For him, interest in Yiddish was a sort of search for an alternative Judaism, which was popular in Berkeley during his student years there. From 1997 through 2001, he served as education director at Congregation Sha’ar Zahav, the LGBTQ synagogue in San Francisco. There he developed the belief that Jewish culture could be understood through the lens of queer culture. He expanded upon this idea in the book Queer Jews (2002, co-edited with Caryn Aviv), a collection of essays exploring how LGBTQ Jews carve out a space for themselves within Jewish life.

Shneer loved good stories, and they often propelled him towards serious scholarly endeavors. In Berlin, he got to know the German-Jewish singer and actress Jalda Rebling, who told him about her mother– the Dutch-Yiddish singer and actress, Lin Jaldati. After surviving a series of German concentration camps, Jaldati settled in East Berlin. She toured East Germany with concerts of Yiddish songs and released several albums. Shneer was entranced with this unique historical figure, who earned a prominent role for herself as a Jewish woman in Communist society. Together with the singer Jewlia Eisenberg, Shneer created a multimedia project, “Art is my Weapon” that tells Jaldati’s story through song, showing how she was instrumental in shaping Holocaust memory in East Germany.

Several years ago, Shneer visited an exhibit of wartime photographs in Moscow and was stunned to discover how many of the era’s Soviet photographers were Jewish. He explored the topic in his book, Through Soviet Jewish Eyes: Photography, War and the Holocaust. In his latest book, Grief: The Biography of a Holocaust Photograph, which was published in August 2020, he tells the history of a single photograph by the Soviet Jewish photographer Dmitri Baltermants. The photo shows a woman standing alongside a trench, riddled with bodies after the mass execution of Jews in Kerch, Crimea, shortly before its liberation by the Red Army in January 1942. The scene would become an early defining image of the Holocaust in the USSR. Shneer’s work brings together insights into history, politics and Jewish culture to explore this photo’s impact.

Shneer was a generous person, dedicating much of his time and energy to Jewish cultural life. Alongside Anna Shternshis, professor of Yiddish studies at the University of Toronto, he co-edited East European Jewish Affairs, and was a popular instructor at the Yiddish Book Center’s summer program. He enjoyed traveling the world, and as an academic advisor to Yiddishkayt’s Helix Project, would lead groups of young Americans on trips to Eastern Europe to see sites in Lithuania and Belarus, where Yiddish culture had once flourished.

David Shneer’s premature death is a great loss to Jewish studies and Jewish culture, to his friends and colleagues. He leaves behind his husband Greg Drinkwater, co-parent Caryn Aviv, daughter Sasha and his parents Diane and Jim Shneer.