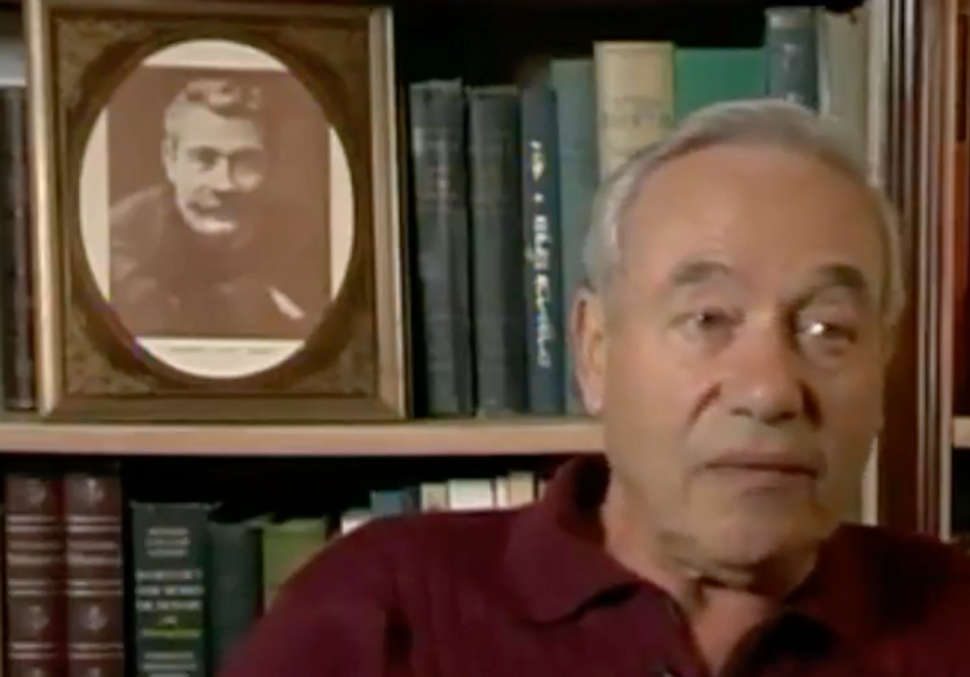 Yakob Basner may be 93 years-old, but that doesn’t stop him from doing a job he loves: teaching Yiddish. Since immigrating to Southern California from the former Soviet Union in 1980, Basner has taught the mame-loshn to over 2,000 people.

“If you want to understand the history of the Jewish people, you need to understand Yiddish because for many of them, this was their language,” he said.

The pandemic has, oddly enough, breathed new life into the old language. In Southern California, where people live dispersed over wide areas and where traffic makes a five-mile trip into an overnight, Zoom has been a godsend. His beginners classes at the Workers Circle have attracted even more students than before.

“People used to travel quite a bit to get to my class,” Basner said. “At the Yiddish club, which meets on the first Thursday of every month, about 10-12 people used to come. But at our last meeting, through Zoom, more than 20 people showed up.”

Basner was born on December 8, 1927 to a Yiddish-speaking family in Riga, the capital city of Latvia. He attended a Hebrew elementary school and, following the Soviet occupation of Latvia in 1940, a Yiddish high school.

As a young man he was very active in local Yiddish youth clubs and theater.

“Yiddish was the language of my childhood,” Basner continued. “I taught myself to read the Yiddish newspaper in Riga, “Haynt” (Today).”

When the Nazis invaded, he and his family were forced into the Riga Ghetto. His mother and his seven-year old twin siblings, a brother and sister, were all killed on his thirteenth birthday, along with 40 other members of his immediate family. During the war Basner was deported to five different concentration camps and was the only one of his immediate family to survive the Holocaust. His father, who was at Stutthoff, was tragically killed just one day before the camp was liberated.

After the war, Basner lived in Soviet Riga, where he married his wife Doba and raised two daughters. He worked in the leather-cutting trade while studying linguistics in the evening.

The years after the Soviets supposedly “liberated” Latvia were difficult and dangerous, and although Yiddish activities were no longer considered acceptable by the Soviet authorities, he continued to participate in them.

“Once, during the intermission of a concert we were giving, several Israelis came over to greet us,” Basner said. “We didn’t know they were from the Israeli embassy. They gave us a gold chain as a souvenir from Israel. As we were walking home, we saw the secret police following us and we ran away. If we hadn’t, they would surely have arrested us.”

Basner dreamed of the day he could finally leave Latvia and make aliyah. But when the day came, his daughter very much wanted to go to the United States. He wanted to stay with his family so they came to the U.S. and settled in Long Beach, California.

As soon as he arrived, he was eager to befriend Yiddish speakers. It didn’t take long.

“The Jewish community had a Yiddish club,” Basner said. “I came to one of their events to give a lecture about Yiddish, and they were so welcoming.” Some of them were immigrants from Bialystok and other places where Yiddish used to be spoken and this contributed to the heymish, or cozy atmosphere in the group. Eventually, Basner became the head of the club.

Basner recalled some of the old Jewish restaurants that once characterized the Los Angeles Jewish community. “You really felt the yiddishkeyt then,” he said.

He began teaching Yiddish at the Long Beach Yiddish Community Center and the Los Angeles branch of the Workers Circle. He also taught classes and gave lectures about Yiddish literature in English in schools, synagogues and Jewish organizations as well as at the University of Judaism and the California Institute for Jewish Culture and Languages. He was also invited to speak in Switzerland, Israel, Latvia and Germany.

Occasionally, younger people who didn’t know Yiddish attended the lectures and would approach him afterwards, complaining that their Yiddish-speaking parents never taught them Yiddish because they felt it wasn’t necessary. For them, the most important thing was to earn a living, so it was enough to know English.

Some of these younger people then took his Yiddish class and got involved in the L.A. Yiddish culture scene. One of them became secretary of the Yiddish literary magazine, “Kheshbn” (Reckoning), said Basner, who has served as advisory board member of the Museum of Tolerance and was honored by the California Legislature in 2016.

“When people ask me where I studied, I always say that I studied at the University of Life,” said Basner. “If you need to know a Yiddish word, the dictionary gives you three, four, five ways to say it in Yiddish. My job is to train them how to understand and choose the correct one.

Basner’s wife, Doba, with whom he shared 68 years of his life until her death four years ago, spoke Yiddish too. They always spoke Yiddish at home, which is how their daughters learned it.

He still remembers his first Yiddish teacher – Avrom Barmazel. “When I went back to Riga in 1990 I was asked to speak at the Yiddish club there. Many people showed up. Suddenly, I saw Barmazel sitting there. I stopped my lecture and gave him a warm smile. He burst into tears.”

Teaching Yiddish still gives Basner lots of nakhes, as do his three eyniklekh, or grandchildren and three ur-eyniklekh, great-grandchildren.

You can learn more about Yakob Basner’s life from this wonderful interview, subtitled in English, conducted in Seal Beach, California in 2004 by Yiddish culture activist Miri Koral and produced by the California Institute for Yiddish Culture & Language: