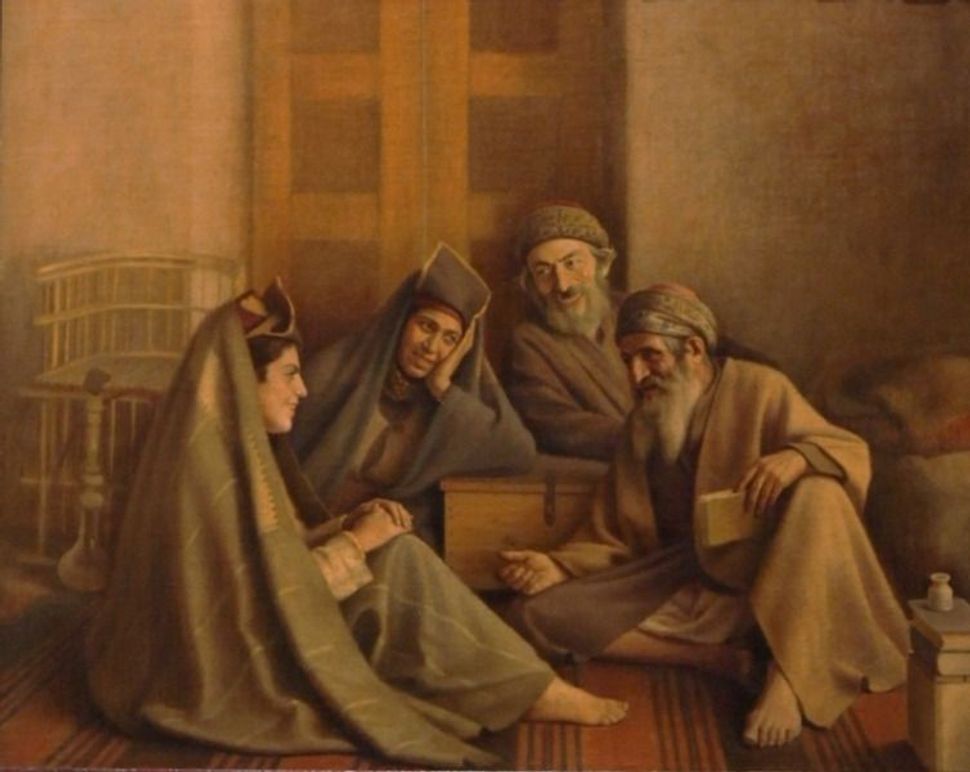 As I was browsing books written about Soviet-Yiddish writers recently in the National Library of Russia, in St. Petersburg, I serendipitously found a 36-page Yiddish pamphlet called “Seyfer hagoyroles” [book of fortune-telling], which described a complex magical method for predicting the future. The book concludes with several alchemical recipes.

It was clear that no one had ever opened the booklet before me; the pages hadn’t even been cut yet. I separated them myself carefully, even those in the middle of the book that were stuck together, and shot several photos of each of them from various angles.

The brochure was published either in 1870 or 1873 (the Yiddish and Russian title-pages contradict each other) by a Warsaw-based printer, Joseph Levinson. Although the anonymous editor of the book claims that the author of the text was the prominent medieval rabbi, Saadia Gaon, this is highly unlikely, since Saadia Gaon was a rationalist, firmly opposed to astrology and fortune-telling.

So does Jewish law in general permit one to engage in fortune-telling? According to the Shulchan Aruch, it’s clearly prohibited. It quotes the words of the Torah: “You shall be wholehearted with the Lord your God. For these nations, which you are to possess, hearken to diviners of auspicious times and soothsayers, but as for you, the Lord, your God, has not given you things like these.” (Deuteronomy 18:13-14).

And yet, according to more esoteric Kabbalistic interpretations, some genuine fortune-telling methods are great and holy – although there’s a risk that one could bring something bad on oneself, God forbid, by using them. In fact, almost every shtetl had an experienced fortune-teller.

Compared with many Hebrew-language fortune-telling manuals, the Yiddish manual I discovered didn’t emerge from the rabbinical world. Written in simple Yiddish, it was apparently aimed at simple, less educated Jews.

Many Jewish fortune-telling methods include some variation of geomancy, an Arabic system of divination. According to this classic method, the fortune-teller throws a handful of pebbles on the dry sand. From there, he or she considers how the pebbles have fallen, and following certain mathematical formulas – sometimes, really complicated ones – they divine the answers for the questions that were posed.

In Jewish variants, you usually take a feather and a piece of paper, close your eyes and cast drops of ink randomly. I’ve heard from several Belarussian Jews that even in the Soviet Union there were Jewish experts in the shtetls who, supposedly, could solve various problems in this manner; for example, finding a missing farm animal in the woods.

The method used in the Warsaw booklet belongs to this category of paper-reading, but it’s filled with rich symbolism. First of all, the booklet explains that before one can predict the future, one has to have a pure intention and, apparently, fall into a kind of trance.

Someone who comes to a fortune-teller can ask any of among 36 questions, following proscribed tables of planets, kings, beasts, and fowl. Most of the questions convey concerns about one’s children, a son’s or daughter’s upcoming wedding, one’s health and livelihood, whether to sell a horse or even whether someone’s husband will leave his mistress and return to his wife.

Among the many characters appearing in the fortune-teller’s incantations are Queen Cleopatra, King Ptolomey, Assyrian King Tiglath-Pileser and a host of animals and birds. What’s even more interesting is that the book references both Arabic-themed images (Cleopatra, lions, and camels), but also European ones, like the Russian sable, the legendary unicorn, woodpecker, cuckoo bird and owl.

So what can we, modern readers, do with a text like this? Actually, quite a bit. Books like these are rich sources of folkloric material, with their own sense of romance, literature, and even poetry. Secondly, they can serve as a valuable resource of old Yiddish words and phrases that, with some imagination, could be recycled using a more contemporary meaning.

One example of the value of these old words can be seen in last year’s wonderful Yiddish translation of “Harry Potter and the Sorcerer’s Stone” by Arun Viswanath. Judging from the magical references and coined words in the translation, it was clear that Viswanath had researched the literature – and vocabulary – of Yiddish folklore concerning charms, spells, alchemy and magic. Just as I discovered with this book on fortune-telling, rich sources for these topics can be found in unexpected places, just waiting to be discovered.