Courtesy of the Felshtin Society

Editor’s note: February 19 marks the yahrzeit of a pogrom carried out in the Ukrainian shtetl of Felshtin in 1919. The massacre was perpetrated by the Ukrainian national army and Jews held Semyon Vassilievitch Petliura, head of the Ukrainian parliament, responsible. In one day, 600 Jewish men, women and children were brutally murdered or critically wounded. 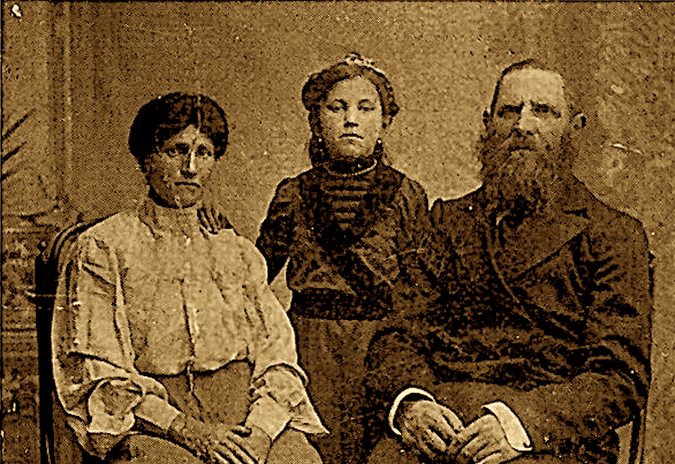 The Hertsoves family – Yokheved (left), her daughter Leah (center) and Yoyne – were all killed in the pogrom. Courtesy of the Felshtin Society

Sore Oksman, also called Sore, Yankl’s daughter, was an eyewitness to the massacre, in which the murderers took the lives of two of her own children. Soon afterwards she managed to emigrate to the United States, to her children Izzie Oksman and Rose Uberman. Another son, Joseph, and daughter, Lizzie Rosenbaum, joined them later.

In May 25, 1926 Petliura was assassinated by the Russian-born Yiddish poet Sholom Schwartzbard, on a street in Paris. Schwartzbard was brought to trial in 1927 and acquitted after three weeks.

After Oksman’s death in 1929, her children found among her possessions the following handwritten account of the pogrom which they believe she wrote around the time of Schwartzbard’s trial. It was in Yiddish and she had intended to send it to the Yiddish daily newspaper Morgn Zhurnal (Morning Journal) but never did.

This account is one of 77 chapters in the 692-page yisker-bukh, or Memorial Book, of Felshtin, published in 1937, and later included in the English translation of the book which came out in 2021. The book was translated by Sidney Shaievitz, founder and treasurer of the New Jersey-based Felshtin Society, with the help of several translators. Shaievitz’s grandfather was stabbed to death in the pogrom.

To buy the English version, email Sidney Shaievitz at shaievitzlaw@gmail.com.

We lived two miles from Proskurov, in the town of Felshtin, Ukraine. When we heard about the terrible disaster in Proskurov on shabbos, the 16th day in the month of Adar I we went to the rabbi for advice because we knew the pogromists were heading in our direction. The rabbi instructed us to fast that day and we did. We also collected a few hundred rubles so we could bribe the hooligans when they came into town, hoping that with this payoff they would spare our lives.

Monday evening after the fast, soldiers rode into town wearing caps that reminded us of Chmelnitski’s soldiers. The townsfolk fell into a panic and, leaving everything behind, ran for their lives. They did not know where to run and followed wherever their eyes took them. The soldiers had already blocked the roads and let no one escape from town. The gentiles of the town and of the surrounding villages were warned that if they harbored any Jews, they too would be killed along with the Jews. They followed orders accordingly and let no one into their homes. As a result, we were forced to hide in attics and cellars.

Later that night, the soldiers went from house to house demanding money and we gave them what we had. In the meantime, they started grabbing people but we had no idea what they did with them. We later learned that they killed them and threw them into cellars.

Tuesday morning, people started leaving their shelters and going out into the streets. That morning, I was in a Jewish home which was located in the midst of gentile houses. I was hoping that the soldiers would think that the house was also a gentile house and they would skip over it. Others had the same thought as I did and approximately thirty people gathered in the same house.

When I fled my home, my three sons were with me. Somehow, along the way, the two older ones got separated from me and I had no idea where they were or what happened to them. Only my youngest son was still with me.

Early the next morning, my youngest boy said: “Mama, I’m going outside to see what’s happening. Maybe I’ll be able to find my brothers.” As soon as he went out, my oldest son ran into the house and said, “Mama, I’m going to escape to the village across the river. Come with me! The river is frozen over!”

“No, my son, I have no strength left,” I told him. “The fear and terror of last night took every bit of strength from me. You go, my son, be strong and may luck be with you!”

I found out later that just as he went out of the house, he saw soldiers dragging his younger brother. He thought he would be able to bribe the murderers so they would let the boy go but they seized him too. They pulled both boys into a house where there were already a great number of murdered victims. There, they killed my boys. Oh, have mercy on me, a mother of two murdered sons!

One of the murderers entered the house where I and many people were hiding. He stood by the door and threw a grenade at us. Twenty people were killed instantly. They never even got a chance to sigh. My sister in-law and four children were killed. Ten of us survived.

When we, the survivors, ran out of the house into the street, we found ourselves surrounded by Petlura’s men. They ordered us to lie down on the ground so they could shoot us dead. We had some money with us and we threw it to them. They told us to flee as fast as we could. We ran down to the river.

Two soldiers on horses ran after us over the frozen river. We had no choice but to drop down and remain where we were. One of the soldiers got off his horse and pointed his gun at me. I grabbed his hands and started to cry: “I’m an old lady, why do you want to kill me?” For some reason, he restrained his urge to kill and told us to quickly run away. We were stunned. We just lay there on the ice, not yet dead but also not yet alive. Whatever happened to those two murderers, I’ll never know.

Lying there on the ice, we heard shooting and screams coming from town. We also saw a great fire. With the remaining strength we had, we forced ourselves to get up and run to the forest.

In my mind, not knowing what had already occurred, I concluded that my children had escaped to the village and that I would find them there safe and sound. My oldest son had told me earlier which gentile’s home he would go to hide. My shoes were gone and in my bare feet I dragged myself into the village to search for my children. I arrived there after nightfall and found only my middle son at the home of the gentile who, he was sure, would help him. The gentile haggled with us and agreed to take my son for the night.

In the morning, the gentile left the house but soon returned with the good news that my two other sons were dead! Oh Lord, what a disaster! To this very day I can not stop lamenting the loss of my two dear sons and the terrible calamity that happened to my unfortunate town! Six hundred people – murdered! Nursing babies in their mother’s arms, slaughtered! Entire families completely wiped out! The eighteenth day in the month of Adar I. Woe to this mother! 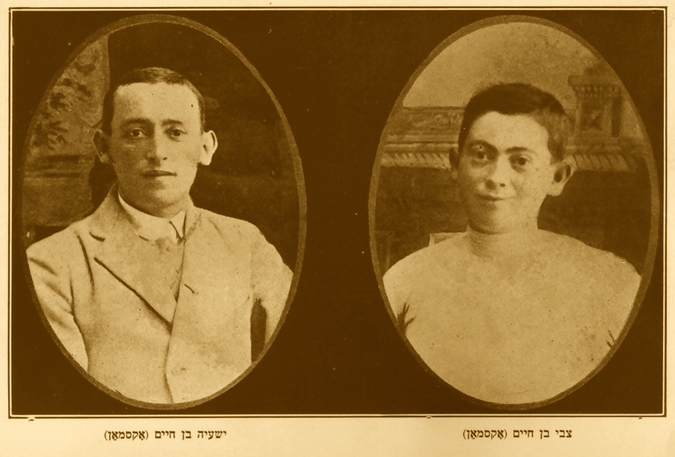 Sore Oksman’s two sons, Yeshaye (left) and Tsvi, were both murdered in the pogrom. Courtesy of the Felshtin Society

Years later, when I read in the “Morning Journal” that Petliura was killed, I couldn’t believe it. The Holy One has avenged us!

I, who write these words, am still a woman in deep sorrow. The mother of two murdered sons. The oldest, Yeshaye, son of Khayim, was 28 years old and the youngest, Tsvi, son of Khayim, was only 15 years old. They were torn from their mother’s side and killed in the worst way. It is six years now that I am here with my other children. May they all be well.