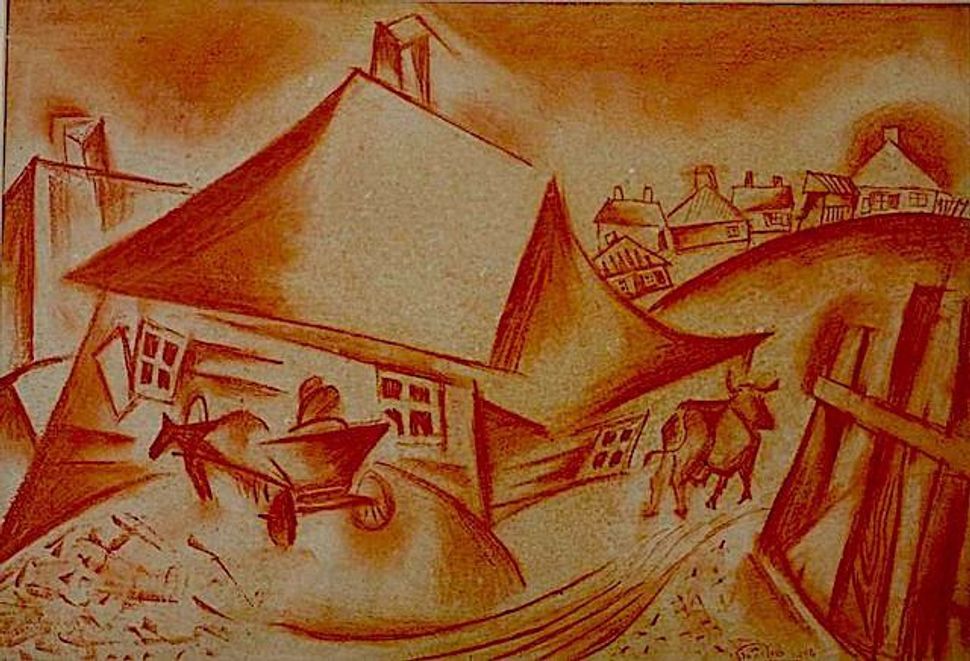 As Russia’s bloodletting in Ukraine continues, we have begun sharing stories about the great contribution that Ukrainian Jews have made to our rich Jewish culture and to the world at large. 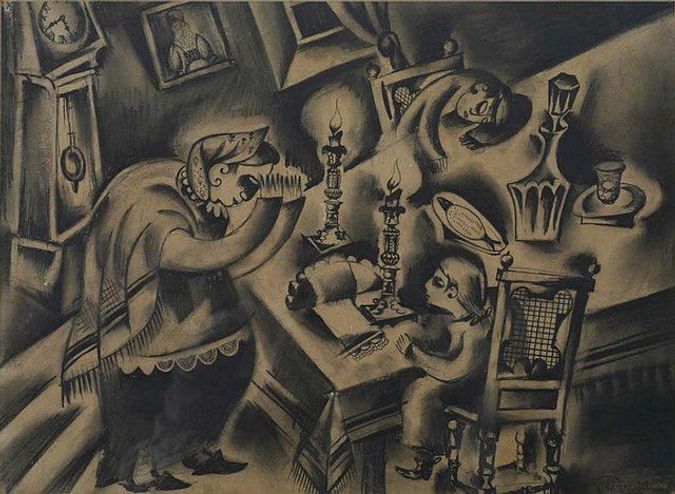 Issachar Ber Ryback was born in Kropyvnytskyi (Yelisavetgrad in Yiddish), Ukraine in 1897, although he was actually a descendant of Lithuanian Jews. In the nineteenth century, thousands of Lithuanian and Belarussian Jews settled in the present-day Ukrainian city Kropyvnytskyi.

As a student of the Kiev Art School, Ryback studied with two well-known Cubo-Futurists: Alexander Bogomazov and [Aleksandra Ekster] (https://arthistoryproject.com/artists/aleksandra-ekster/). After completing art school in 1916, he traveled through shtetls in Ukraine and Belarus, creating distinctive avant-garde images of bygone Jewish life. 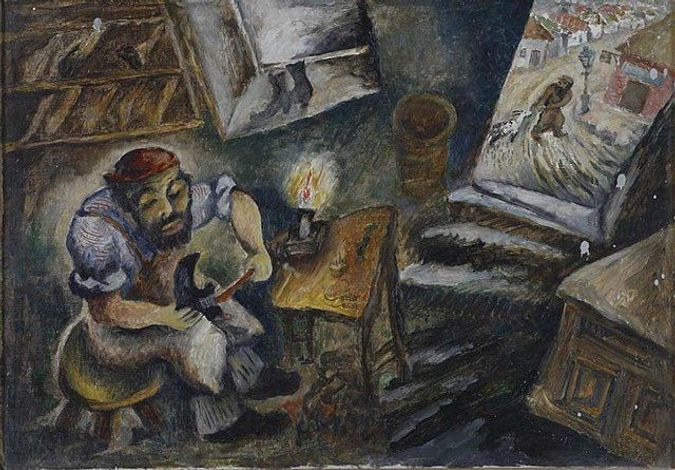 The Shoemaker (1917) Image by Wikimedia Commons

His artwork was actually on display at an exhibit in Moscow during the fateful year 1917 when the Russian Revolution broke out. During and after the revolution, the old Jewish world of Ryback’s childhood was destroyed by pogroms and his own father was murdered in the 1919 pogrom in Kiev (today Kyiv).

Following the October Revolution, Ryback participated in various projects headed by the Jewish progressive avant-garde movement, together with the classic Yiddish writers Dovid Bergelson and Dovid Hofshteyn. In 1918 Ryback helped create the Kiev-based Yiddish organization Kultur-Lige (Culture League). As a socialist, he supported the revolution, but because of the Russian civil war he was forced to flee in 1921 – first to Kovno, and then to Berlin. 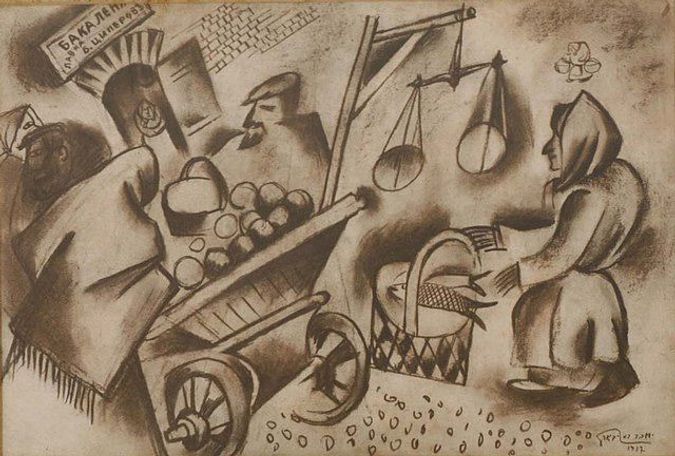 The market (1917) Image by Wikimedia Commons

It was in Berlin that Ryback joined an avant-garde group of German expressionist artists and architects called the November Group, which strove to express values of the radical left through art. During those years, Ryback illustrated a series of Yiddish books.

His illustrations of Leyb Kvitko’s children’s verse were so popular that they still appear in contemporary Russian translations of Kvitko’s books. 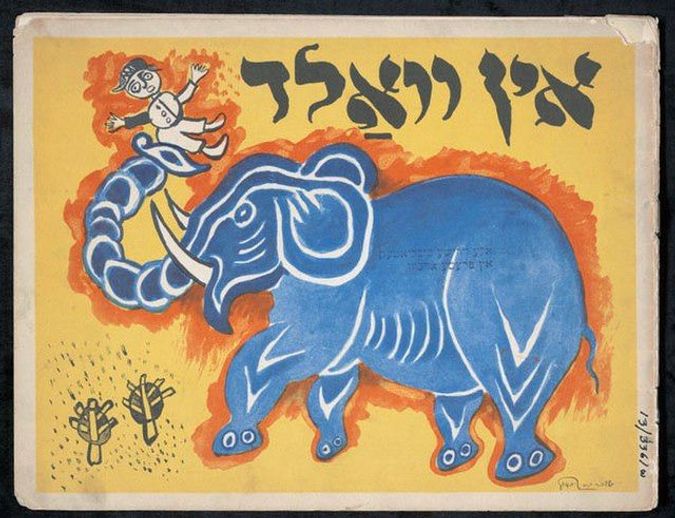 Ryback’s illustration on the cover of Leyb Kvitko’s children’s book, “In the Forestt” (circa 1920s) Image by Wikimedia Commons

For a short while Ryback lived in the Soviet Union and in 1926 he went to Paris, where his style transitioned from avant-garde to realism. In 1935 he died of tuberculosis at only 38 years of age. Some art experts believe that had he lived longer, he might have been as renowned as his Parisian contemporary Marc Chagall. Unfortunately, much of his work was lost during World War II.

Ryback’s biography is a concrete example of the complex intertwined history of Ukraine, Russia, and the Western world. While he lived in Berlin, many Jews associated Germany with socialism and the progressive values of the left. In the 1920s the Berlin Jewish left hadn’t yet been demoralized by the knowledge that the worst anti-semitism in human history would emerge from there. Similarly, as an open devotee of the Soviet Union, Ryback probably never imagined that his fellow socialists – Dovid Bergelson, Dovid Hofshteyn, Peretz Markish and Leyb Kvitko – would all be executed by Stalin’s regime.

Ryback’s magnificent illustrations still resonate. In 2007, many of them appeared in a reprint of Ber Smolyar’s 1922 children’s book Kinder-velt (“Children’s World”), published in Russia. Ryback’s drawings were also included several years earlier, in 2004, in a new bilingual (Yiddish and Russian) edition of Miriam Margolin’s book “Stories for Young Children”.

Both in Russia as well as Ukraine, the artist is considered a native son since he was born in the Russian Empire on the territory of today’s Ukraine. The sad paradox of Russia’s current invasion of Ukraine remind us that the history of these two countries is intimately intertwined. In fact, it was during the Soviet era that Ukraine was first recognized as a modern nation, with support for its language and culture and the establishment of a wide network of Ukrainian-language schools. One can rightly indict the Soviet regime, particularly in Stalin’s time, of various crimes against Ukraine, but this prior recognition of Ukraine remains a historical fact.

The city where Ryback was born is another example of the complicated ethnic and political conflicts in this region.

Yelisavetgrad was established in 1754 as a Russian fortress, to protect Russia from Poland and Turkey. At that time the area was known as “New Serbia,” because a number of Serbs and other transplanted Balkan groups lived there. In 1924 the Soviet government changed the name of the city and began calling it Zinovievsk; in 1934–Kirovo; in 1939–Kirovograd. Grigory Zinoviev and Sergei Kirov were both Soviet revolutionaries and politicians.

Then in 2016, as part of the Ukrainian anti-communist campaign, the city adopted its current name, Kropyvnitskyi, named after a classic Ukrainian actor, Marko Kropyvnytskyi.