The candlesticks that almost didn’t make it to America

When I was a child, I was always intrigued by the ornate, slightly crooked silver candlesticks in my aunt’s dining room, maybe because they stood out from the otherwise clean, modern decor. At some point, my aunt told me they had belonged to her grandmother – my great-grandmother. After I got married, my aunt, who was childless, gave the candlesticks to me.

I was delighted to have this connection to my great-grandmother, who died when I was five. Even though she lived in the United States for almost 50 years, she never learned much English. When my family visited her, my parents would have me memorize a Yiddish song to sing for her. Unfortunately, I don’t remember which songs they were, but I do remember a tiny, ancient woman smiling at me fondly. (Years later I saw a photo of her in her younger days and was surprised to see that she had been quite stout.) 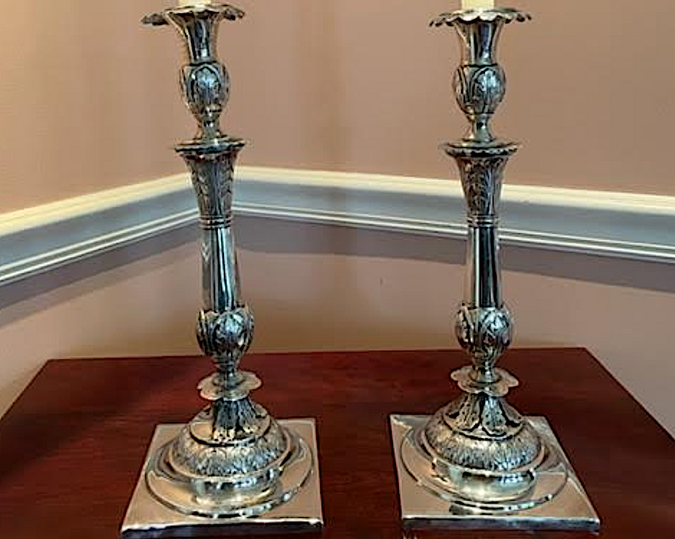 Years after I got the candlesticks, my great-uncle – my great-grandmother’s youngest child – told me the story of how the family emigrated from Ostropol, Ukraine (the birthplace of the legendary Hershl Ostropolyer) in August 1914. After taking a train to a port in Germany, they were eating in the shipping company’s dining hall, expecting to sail to America in a day or two. Suddenly someone from the shipping company burst in and shouted: “War has been declared! Get on the ship immediately! We’ll send you your luggage later.” Before boarding the ship my great-grandmother grabbed two things from her suitcase: her purse and a pair of silver candlesticks. After the ship took sail, it took 16 days to arrive on the American shore. Throughout the voyage all lights were shut off at night to avoid capture by the British.

Needless to say, the rest of the luggage never arrived.

When I heard this story, I realized that the candlesticks my aunt had given me were the ones my great-grandmother had grabbed from her suitcase before boarding the ship.

But there’s a coda: After my great-uncle died, I told this story to his son, who immediately told me that it couldn’t be true because HE had those candlesticks. Did my great-grandmother grab TWO sets of candlesticks in 1914? Did she buy another set after arriving in America? Unfortunately, there’s no one alive who can answer those questions.

Whatever the truth, I’ll continue to treasure the candlesticks as a link to my great-grandmother, knowing that they were perhaps the same ones that accompanied her on the perilous journey to the new country.

The candlesticks that almost didn’t make it to America