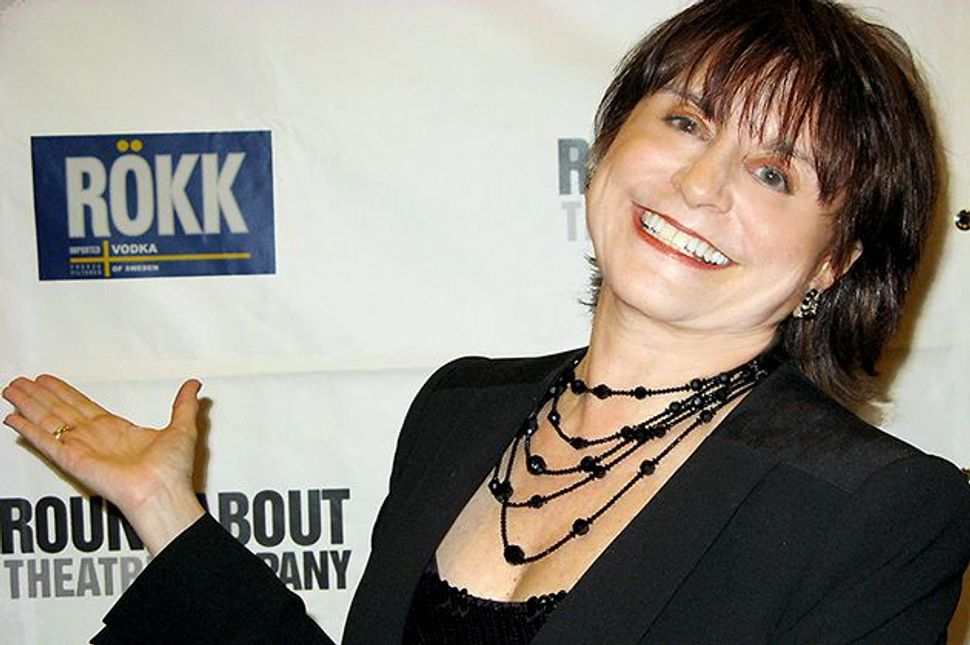 If you can survive Act I of Roundabout Theatre Company’s production of “The People in the Picture,” which opened on April 28 at Studio 54, by the end of Act II you will witness one of the longest, schmaltziest onstage bedside-death scenes since Second Avenue’s Yiddish theater heyday. With book and lyrics by Iris Rainer Dart (author of nine novels, including “Beaches”) and music by Mike Stoller and Artie Butler, this well-intentioned musical about a pre-World War II Warsaw Yiddish theater group of which the members survive the Holocaust gets farblondzhet, or goes seriously astray. I only hope that Donna Murphy, who has been nominated for a Tony Award for her portrayal of actress Raisel, aka Bubbie, in the musical, wins the award for her Sisyphusian effort to keep this musical from tanking. What appalled me most was the denigration of Yiddish as in the Act II musical number “Ich, Uch, Feh,” as well as such Borsht Belt-inspired lines as “using your tukhes” (“using your derriere — that is, smarts”). For lovers and speakers of Yiddish, including writers I.L. Peretz, Sholom Aleichem, Isaac Bashevis Singer and myself, this is as close as one gets to an ethnic slur. Feh, indeed!

Having attended studio readings of early work-in-progress “People” scripts, my recollection is that of an evocative encounter with a colorful prewar Yiddish theater band and their post-Holocaust trajectory. The characters reminded me of actors my parents took me to see as a child at prewar Warsaw’s Nowosci theater. The role of Raisel may have been modeled on such multitalented prewar actresses as Ida Kaminska, Dina Halpern, Rokhl Holzer and those of their compatriots who survived to perform in New York and Hollywood — Zipora Spaisman, Reizl Bozyk (Bubbie Kantor in “Crossing Delancey”), Miriam Kressyn, Mina Bern and Shifra Lerer.

In addition to denigrating Yiddish, among the play’s indigestibles is the appalling out-of-context, acted-out Warsaw ghetto black humor: Three cast members portray characters that hatch a plan to kill Hitler. When Hitler does not appear for several days, a member of the trio says: “I hope nothing happened to him.” Then there’s the chirpy declaration, “Hey, a pogrom is not an easy act to follow.” Hey! It wasn’t so funny for Tevye and his real-life fellow Jews, those who hid or ran from pogromchiks in pre- or postwar Russia, Poland or elsewhere.

The script encompasses the angst and rage of a mother-daughter conflict, memory loss and old age, and the anguish of reclaiming postwar a child who had been given to Polish Christians for safekeeping. At the end of Act II, Raisel’s granddaughter Jenny, charmingly portrayed by 10-year-old Rachel Resheff, claims to have channeled her grandmother’s memory banks and pain, and brightly proclaims that she now speaks Yiddish, as she belts out: “Ich, Uch, Feh.” Not funny.

“Today… in this place of solitude and memory, we reflect not only on the loss, but also on the uplifting story of rebirth and renewal…. We marvel at the exponential power of survival ”said David Marwell, director of the Museum of Jewish Heritage — A Living Memorial to the Holocaust, to the more than 2000 survivors and their descendants and guests at the May 1 Annual Gathering of Remembrance, held at New York City’s Temple Emanu-El. “We can never forgive nor forget,” said Roman Kent, chairman of the American Gathering of Jewish Holocaust Survivors and Their Descendants, adding: “How can I erase the sight of living skeletons, burning flesh?… Auschwitz, a place where many of us never knew each other in life, but shared in the smoke coming out of the chimneys.” Kent cautioned, “We don’t want our past to be our children’s future. To remember is not enough. Our obligation is to tell them to be tolerant.”

In his brief surprise appearance, New York State Senator Charles Schumer credited Steven Spielberg’s film “Schindler’s List” with “putting a dagger in the heart of Holocaust deniers.” Outraged at the “demonization of Israel by the Arab world — and in Europe — not seen since Hitler demonized Jews,” Schumer declared: “The one place it has not happened is here in the U.S. We owe a great debt to the United States…. We will prevail. We will survive.”

“As fewer and fewer Holocaust survivors live to tell their story, we, in Israel — parents, teachers, scholars — are doing everything in our power to make sure that the lessons of the Holocaust are imprinted not only in the minds of the next generations, but more importantly, in their hearts,” said Ido Aharoni, Israel’s consul general in New York. “Young Israeli students spend a mandatory 30 hours on Holocaust studies. Tens of thousands of young Israelis visit the Nazi death camps in Poland as part of their high school curriculum…. Even as we mourn for the lost cultural treasures of the Yiddish language, we are exploring and reviving it. But for us Israelis, remembering is not only commemorating the atrocities of the past, but maintaining, in the present time, our vibrant, democratic, pluralistic society…. Every Israeli rescue team that saves human lives in foreign lands symbolized Jewish conscience that could not be defeated. Every Israeli innovation that improves the lives of people the world over that benefits mankind proves that our presence among the nations is vital.”

Stage and screen actor Ron Rifkin read the biographies of the six candle-lighters while the survivors — mostly women in their 80s and 90s, each with astonishing credentials in multiple camps, ghettos and forests — mounted the bimah, accompanied by their children, grandchildren and, in one case, a toddler great-grandchild. A survivor myself, I sat next to my granddaughter Rachel Olney.

“It’s not fair to blame my mother for my tree nut allergy” said WABC-TV Anchor Lori Stokes, host of “Celebrating Safe Sweets,” Food Allergy Initiative’s April 27 annual spring luncheon, held at Cipriani 42nd Street. Addressing the 600 women, most of whom have children with life-threatening allergies, Stokes added: “As a journalist I am doing my job enlightening the public, getting the message out to help save lives. My father, [former American Congressman] Louis Stokes, and my mom, who are present, now have three grandchildren with severe food allergies.”

Keynote speaker Dr. Hugh Sampson, director of the Jaffe Food Allergy Institute of Mount Sinai School of Medicine, in New York, detailed the clinical tests currently going on at the hospital. “For the first time, we can actively treat patients,” he said. Sampson appealed for allergic volunteers for some of the protocols now in place at the institute.

“We want to find cures… so our children can go to school without fear of eating something that can kill them,” said Roxanne Palin, who, with Abbey Braverman and Stephanie Winston Wolkokoff, co-chaired the event. Everyone went home with a goody-bag filled with nut-free, egg-free, peanut-free, gluten-free (and more) chocolate, muffins, pretzels, cupcakes and jellybeans, provided by a roster of vendors who set up tasting booths. With a daughter and grandchildren with food allergies, I look forward to the day they can leave home without an EpiPen.