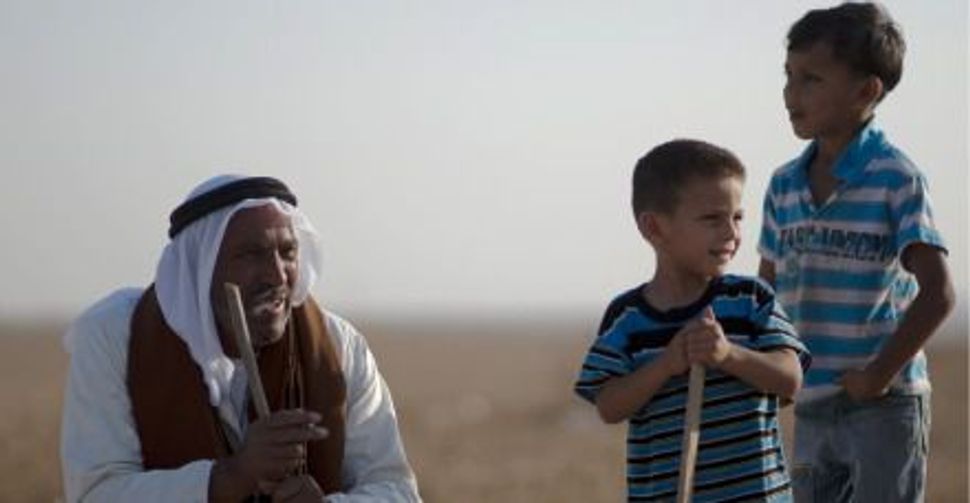 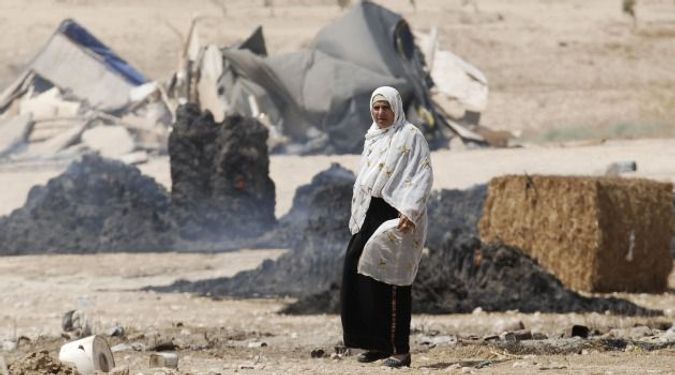 Barren Home: Bedouins are resisting relocation from ancient villages in the stark Negev Desert of southern Israel. The government insists it has their interests at heart. Image by getty images

To the Bedouins, the plan for a mass demolition of their villages is a cruel move that would expel them from land they say belongs to them; to the Israeli government it is a bold attempt to remedy this minority’s own complaints about its low living standard and bring it into the 21st century.

Israel’s government is poised to propose legislation to solve a dispute as old as the country itself. It will compensate 80,000 Bedouin Arabs for land in the Negev that they say they own. Israel considers them squatters, and will demand that they leave.

As the villages slated for evacuation are considered illegal by Israel, inhabitants do not receive services like sewage and connection to the country’s electricity grid —services they are to receive in the government’s mass resettlement plan. “You cannot say they don’t have the standard of living of other Israelis and criticize when we give that,” said Ofir Gendelman, a spokesman in the Prime Minister’s Office.

In response, Bedouin activists and their supporters have turned to Washington. In late October, three Bedouin activists and one Jewish advocate for their cause flew to America from Israel to seek the administration’s intervention in an effort to avert the plan. They held meetings at the White House and lobbied Congress members. They tried to raise objections from civil society, briefing think tanks, meeting with faith groups and speaking at universities.

Doni Remba, co-director of the American-based Campaign for Bedouin-Jewish Justice in Israel, who participated in the Washington visit, said delegation members were told that the American ambassador to Israel, Dan Shapiro, would soon travel to some of the Bedouin sites slated for demolition. Remba stressed that the trip would not be a solidarity visit but part of the effort of the United States to “learn about the situation.”

But if Washington is acting, it’s not in public. Asked if Shapiro had, in fact, since the Washington mission, visited any of the sites due to be demolished, embassy press attaché Kurt Hoyer replied, “The ambassador, as his predecessors did, visits communities all around Israel as a normal part of his portfolio, not in response to any particular event or actions of others.”

Israel’s plans for its Bedouin citizens, who live in Israel, parallel those it implemented in Israeli-occupied Gaza when troops evacuated Israeli Jews living in settlements there. “If the government evacuated 8,000 citizens living in legally authorized buildings, it can also evacuate those living in illegal buildings,” wrote Ehud Praver, head of the department for policy planning in the Prime Minister’s Office, shortly after the Gaza disengagement of 2005.

Praver went on to head the committee providing policy for the forthcoming legislation. Its report, released last May, does not specify the number of Bedouins that will be relocated, but Gendelman, the prime minister’s spokesman, revealed to the Forward that the legislation will propose evacuation of all 80,000 who live on disputed land — double the number estimated by critics of the new policy.

Gendelman said that the legislation will offer generous compensation to evacuees for land that they inhabit as well as for land over which they claim ownership. But while the Praver report says that compensation may be as high as 50% of the value of the land claimed, Bedouin activists say that the complicated structure for calculating compensation means that in the final reckoning it will be much lower.

The Regional Council for the Unrecognized Villages and the advocacy organization Bimkom — Planners for Planning Rights have released a rival master plan in which they argue that the state could legalize the unrecognized villages without violating any of its planning principles. They put forward “a diverse and agreed planning solution based on the existing Bedouin settlements, which would be integrated in the overall planning of the Beersheba metropolitan area.”

Many critics of the government’s plan think that planning rules and Bedouin community development are not the government’s real priorities. Aburabia considers the plan to be intentional “ethnic displacement.” She told the Forward: “If there were a plan that said we should concentrate 100 rural Jewish communities into 30 towns, nobody would think it reasonable. But the objective with Bedouins is to have the maximum number of Bedouins on the minimum amount of land possible, concentrated [just] in the northern Negev.”

Aburabia believes that the new legislation constitutes a push to reduce the footprint of the Bedouins while increasing the Jewish footprint in the Negev. Prime Minister Benjamin Netanyahu is open about the fact that he is deeply concerned about the demographics of the desert, keen to boost the Jewish population there to ensure a Jewish majority. On October 30, his Cabinet advanced plans for 10 new Jewish communities in the Negev. But his office insists that the two policy areas are unrelated. “The Bedouin issue is completely disconnected,” Gendelman said. “The plan is for the benefit of the Bedouins, period.”

As the villages slated for evacuation are considered illegal by Israel, inhabitants do not receive services like sewage and country’s electricity grid. “You cannot say they don’t have the standard of living of other Israelis and criticize when we give that,” Gendelman argued.

Bilha Givon, executive director of the Sustainable Development for the Negev, a not-for-profit organization that works with Jewish and Bedouin residents of that area, shares Gendelman’s frustration about Bedouin resistance to the plan. “Israel is not an apartheid country. [Bedouins] have the rights, but every time you offer something, [community] groups won’t accept it, so you can’t achieve anything,” said Givon, a member of the Goldberg Commission, the 2008 panel that came up with the original principles that Praver’s committee was asked to implement.

But another member of the Goldberg Commission, Faisal el-Huzayel, former deputy mayor of the Bedouin city of Rahat, told the Forward that his community is right to reject the plan. In his view, the final Goldberg report was too harsh on Bedouins, and the Praver report even more so. He believes that the new policy will accentuate tensions between Israel and Bedouins, a traditionally loyal minority, some of whom serve in the army. “Not giving land rights can cause conflict, can lead to violence,” he said. “The Bedouins will not agree to leave, and will say, ‘Why should I give up my home?’”

This theme was common during the Bedouins’ visit to the United States. “Ultimately it will accentuate the Jewish-Arab conflict in Israel,” said Remba, the Jewish Bedouin advocate. The plan creates a “security risk,” he said, because in the long run, the evacuees “will fight back.”