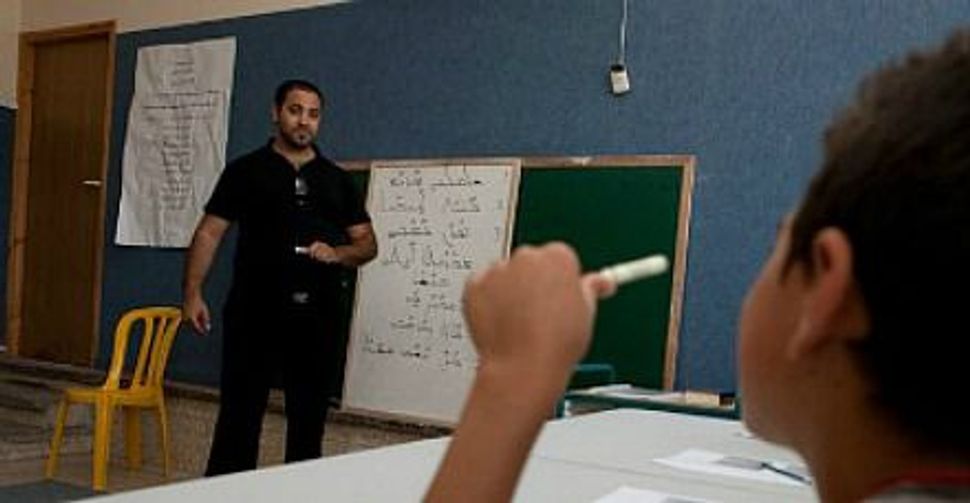 Image by courtesy of aram 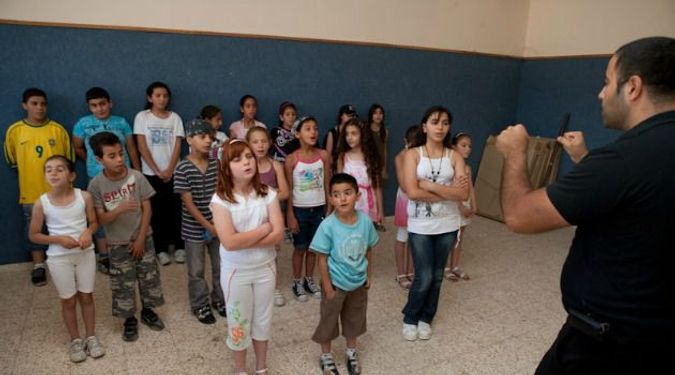 On a hot August day in the Galilee, a group of schoolchildren in the Arab Christian village of Jish counted diligently, from one to 10, after their instructor. But the words, though similar to Arabic and Hebrew, were neither.

At this unique summer camp, some 85 children were being immersed in Aramaic, the language Jesus spoke and in which the Gemara — one of the Talmud’s two major books — was written. Once the Middle East’s lingua franca, Aramaic is an almost vanished language today. But the camp organizers and the families of these children hope to resurrect it. Moreover, they aim to carve out a new national identity based on that resurrection.

It’s a campaign that Eliezer Ben-Yehuda, the father of Modern Hebrew, would readily understand and, perhaps, applaud. But in today’s Israel, it’s a campaign fraught with controversy.

Aram, the Maronite Christian group that organized the camp, is spending long hours huddling with a team of lawyers, preparing papers to submit to Israel’s Supreme Court later in October. They are seeking formal recognition of their nationality as “Aramaic,” rather than Arab, by the State of Israel.

Watch video of children at the Aramaic Center:

Other communities registered in Israel as national groups, such as Arabs, Druze and Jews, receive important legal status in Israel and, with this, certain kinds of communal recognition, such as their own respective education systems within the Ministry of Education. The leaders of Aram say they are not seeking anything like that for now. The recognition would be largely symbolic. But the group has greater long-term ambitions that include uniting Maronite Christian communities throughout the region as a cohesive ethnic group separate from the greater Arab societies with which they have long been intertwined. And recognition from the government of their national claim would undoubtedly greatly empower Aram, enabling it, among other things, to collect more donations from abroad.

Currently, the Interior Ministry registers Maronite Christians in Israel as “Arabs,” unlike in Lebanon, an Arab country, where they are recognized as ”Maronites,“ a separate religious and national group. Four years ago and once again earlier this year, the Interior Ministry denied requests from Aram asking to be recognized by the government as a distinct national group. Now Aram is bracing for a legal battle with the ministry in front of the high court.

“It is very simple,” said Shady Khalloul, Aram’s founder. “We are not Arabs. We existed long before Arabs came to this region, and it’s about time we get state recognition.”

But in the Middle East, few things are simple. And issues of ethnic and national identity are more complex than most. Aram’s drive for separate recognition is opposed by some other Maronite groups and by many Palestinian Israeli nationalists as an attempt to divide and weaken the Palestinians’ struggle not just for equal social and civil treatment, but also for recognition as an autonomous national minority within Israel.

In fact, Aram’s website says that it aims at “uniting all Christians in the Middle East to be one strong nation, to educate our children about their ancestors’ heritage and history.”

Aram’s attempt to revive Aramaic is central to its larger political drive. Aramaic — the term is derived from the name Aram, the grandson of biblical Noah via his son Shem — is a Semitic language that was once widely spoken by Assyrians, Chaldeans, Hebrews, Persians and Syrians. It survived the fall of Nineveh, Babylon and Jerusalem. But following the Arab conquest of the Middle East in the seventh century, the language quickly declined. Today, Aramaic, which is written in Syriac script, is mostly used for prayer and liturgy by Maronites, Assyrians, Chaldeans and other Christian groups spread through the region in Lebanon, Syria, Israel, Jordan and other countries.

According to Yona Sabar, a language professor at the University of California, Los Angeles, no more than 200,000 people worldwide use this language in their daily lives. The largest Aramaic-speaking community in the world today resides in Sweden — an anomaly attributable to steady Christian immigration from the Middle East during the past 100 years. It is this Swedish community that provides instructional materials to Aramaic students in Jish and to Beit Jala, a mostly Christian town on the West Bank where efforts to preserve and revive the language are also active.

The young summer camp participants in Jish are part of this revival effort. Most speak Arabic, there are no more than a handful of mostly elderly Aramaic native speakers today in Israel. These children and teenagers are encouraged by their parents and teachers to use as much Aramaic in their daily life as possible. In a way it is their mother tongue, since they have heard some Aramaic since birth. But they require more training and immersion for it to become their daily language.

Meanwhile, on a parallel track, Aram has been seeking support from Israeli political leaders in preparation for its moment before the Supreme Court. Some, including Avigdor Lieberman, leader of right-wing Yisrael Beiteinu party, the third-largest faction in Israel’s parliament, have responded positively.

But even in Jish, a small village of some 3,000 inhabitants that is ground zero for the effort, some residents complain privately that Aram’s battle for self-identity could weaken the Palestinian cause. One resident, who asked to be identified as only “Rami,” said that over decades of living in Israel under Jewish rule, Muslims and Christians in the region had become one Palestinian nation. Aram, he said, is promoting a split that serves Israel and harms the Palestinians. He requested anonymity, he said, to avoid generating a family dispute or feud of the sort that is easy to spark in a small place like Jish.

More important, Deacon Soubhi Makhoul, administrator of the Maronite Exarchate in Jerusalem, told the Forward that the Maronite church does not support Aram’s cause.

“I believe that this is a political issue,” he said. “Moreover, there might be specific Israeli political circles that stand behind this attempt. The Maronites are Arabs, we are part of the Arab world. And although it’s important to revive our language and maintain our heritage, the church is very outspoken against the campaign of these people.”

Khalloul, an army officer who served in elite forces in the IDF, dismisses such criticism. He cites Zionist history in doing so. “It’s just like the Jews who faced opposition from the Haredim when Israel was established,” he said, referring to the angry opposition ultra-Orthodox Jews marshaled against Ben-Yehuda’s effort to revive Hebrew as a modern, secular language. “Those who oppose our efforts to revive our language and identity are Maronites in name only. They do not really engage in the life of our community.”

Khalloul asserted that Aram represents not just members of its association, but also other Christian minority groups in Israel that share its ideology. “We do not rely on the [Maronite] church’s support in our struggle,” he said.

Ironically, even as he fends off charges of helping the Zionists divide and conquer, Khalloul is at one with other residents of Jish in demanding redress from Israel on a crime as old as the State of Israel itself, one that refuses to be forgotten or forgiven. Most of the Maronite families that live today in Jish are not from there. In “1948: A History of the First Arab-Israeli War,” an authoritative account of the military campaign to establish Israel as a state, Israeli historian Benny Morris relates that Israeli forces murdered a number of prisoners of war and local residents in Jish, sending its native residents fleeing — most to Lebanon, where they became refugees.

Meanwhile, Israel forced residents of Kafr Bir’im and Iqrit, two nearby Arab-Christian villages that had maintained friendly relations with their Jewish neighbors, to relocate, eventually, to the now-abandoned Jish. Initially the army asked the residents of Bir’im to leave for just two weeks until the end of the military operation and assured them they could then return. But after the war ended, the villagers were barred from doing so.

In 1953, Israel’s Supreme Court ruled that the inhabitants of Bir’m were entitled to get back their property. Instead, the Israeli army that year bulldozed the village and expropriated the village’s lands. While running for prime minister in 1977, Likud leader Menachem Begin personally vouched to the villagers that if he were elected, they would be able to return to their lands, to rebuild their homes. But after his election, and after much delay, his government disavowed that promise.

Fear of establishing a precedent of Arab return to their villages was said to have dominated the government’s decision.

The Aramaic enthusiasts of Jish say they seek justice on both issues — the recognition of Maronites as a separate national group, and the restoration of their land rights.

“Israel should help its friends, those who historically supported it and assisted its people,” said Khalluol “We are addressing this issue as Israelis, and I believe that it’s also an interest of the state to help good people to restore their rights.”

Israel Hasson, a Knesset member for Kadima, fully supports this point. “We are talking about self-determination here, not independence or departure from the State of Israel. It’s their cultural and religious heritage, which is so important to preserve. Indeed, we should do more for this community, and I intend to do everything possible to build a bridge between them and the State of Israel.”

Ksenia Svetlova is a nonresident senior fellow at the Atlantic Council’s Middle East programs and is a former member of the Israeli Knesset, a researcher, and a writer.