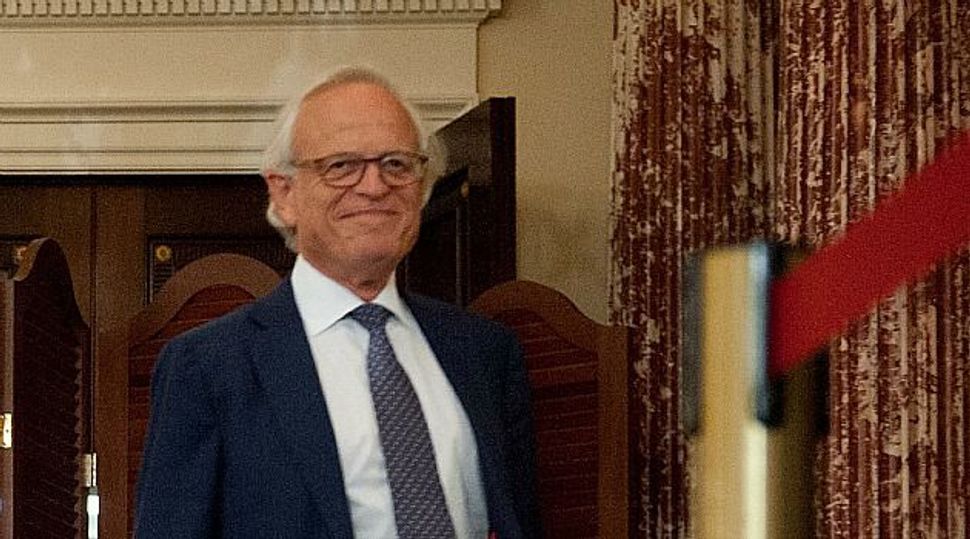 Mediating From Strength: Martin Indyk has earned a reputation for being blunt and wearing his beliefs on his sleeve. Could that be just what the nascent Mideast talks need? Image by getty images

Cell phone to his ear and a pile of papers under his arm, Martin Indyk rushed to the elevator at Washington’s Mayflower Hotel.

It has been only three hours since secretary of state John Kerry announced the appointment of Indyk as his special envoy for the Mideast peace process and the veteran negotiator was already shuttling between Israeli and Palestinian delegations, making sure there were no last minute bumps on the road to resuming peace talks later that day.

As the Middle East peace process’s newly crowned top negotiator, Indyk, 62, who was born in Britain, grew up in Australia and spent his adult life in the United States, will have to straddle not only national identities but also perceived allegiances.

He had often said, especially when speaking to Jewish audiences, that he was first drawn to the Middle East “through my Jewish identity and my connection to Israel.” In his acceptance speech at the State Department on Monday Indyk also made mention, as he has done many times in the past, of the time he spent as a student in Jerusalem during the 1973 war and how that experience has led him to get involved in the region.

But while Indyk’s strong personal ties to Israel and to the Jewish community have been used at times as ammunition by Palestinians who view him as being too easy on the Israelis, they have not shielded Washington’s two-term ambassador to Tel Aviv from critical voices on the Israeli side.

Indyk, said former colleague at the State Department Middle East team Robert Danin, “can be very direct and very blunt.” It’s a quality Danin believes allows the new negotiator to “cause some discomfort for both sides, which is something they need at times.”

This discomfort evoked strong reactions about Indyk in Israel. Former Prime Minister Ehud Barak, on the one hand, was so appreciative of Indyk’s work on the peace process that in an unusual move he asked President Clinton to appoint Indyk as ambassador in Israel once again. On the other hand, Benjamin Netanyahu, when first elected prime minister in 1996, sent word to Washington that he’d like to see Indyk replaced because he was seen as too close to leaders of the Labor party.

Martin Indyk’s life story is closely intertwined with that of the pro-Israel community and with Israel itself. He started off his career in America as a research analyst with the American Israel Public Affairs Committee, a biographical fact that is still being used by Indyk’s critics as a proof of his pro-Israeli government bias. But there are other aspects of his biography. In recent years, Indyk sat on the board of the New Israel Fund, a pro-Israel organization that supports liberal causes within Israel proper and opposes Jewish settlements in the occupied West Bank.

In his policy work outside government, Indyk was one of the early founders of the Washington Institute for Near East Policy, a pro-Israel Washington think tank. Later, he worked on issues relating to Israel and its neighbors as head of the Brookings Institution’s Saban Center, which was established with funding from Haim Saban, an Israeli-born media mogul and major Democratic Party funder.

“He’s not a peacenik and he’s also not a Likudnik,” said an Israeli official who worked closely with Indyk in the past two decades. “He is a mainstream two-state solution guy.”