J Street, On Political Roll, Reaches Out to Israeli Center — and Even Right 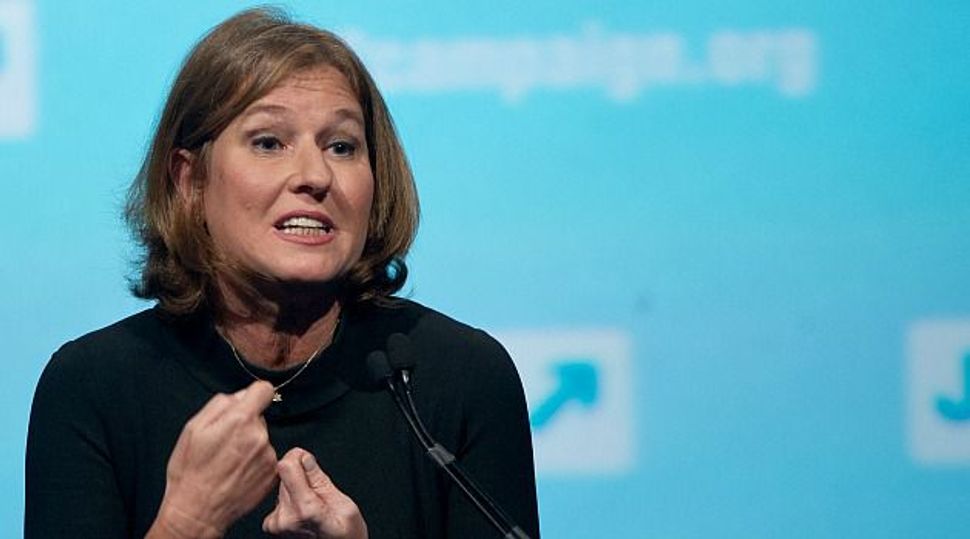 Just a few years ago, the dovish Israel lobby J Street was anathema to most mainstream politicians in Israel. But at the group’s fourth national conference, perhaps the most notable feature was the range of public officials it drew from across Israel’s Jewish political spectrum.

“Why should there be any problem?” asked Tzachi Hanegbi, a member of Israeli Prime Minister Benjamin Netanyahu’s right-wing Likud party, when asked if he expected any repercussions for his decision to attend the lobby’s conference. “I’m used to arguing with leftists for 30 years.”

Yitzhak Vaknin, a member of Shas, an ultra-Orthodox Sephardic party, explained his presence at the conference, saying, “I believe we should love every Jew in the world.”

And Meir Sheetrit of the Hatnuah party, which is part of Netanyahu’s coalition, added: “We’re talking to everyone. I don’t see any problem.”

It was a lonely, critical voice in Israel that served as a reminder that viewing J Street as a legitimate partner for dialogue was, until not so long ago, far from the Israeli consensus.

“I am asking them — dear MKs, are these your friends? Are these the elements with whom you choose to identify?” Ayelet Shaked from the right-wing Ha’Bayit Ha’Yehudi party wrote on her Facebook page. “Your participation in the conference grants legitimacy to extreme and unbalanced criticism of Israel.”

If so, it was a stance legitimated not just by a range of Israeli politicians, but also by Vice President Joe Biden, who appeared at the conference as a keynote speaker.

But the road to the heart of Israel’s political consensus has been tied, to a great extent, to J Street’s willingness to accept a variety of views, many of which are far away from the group’s opening position. An organization that started off as the home for the progressive left has since found itself increasingly broadening its tent to include more centrist voices.

The evidence was clearly seen throughout J Street’s conference, which took place from September 28 to September 30 in Washington’s Walter E. Washington Convention Center. Honored with the opening night’s keynote speech was Tzipi Livni, Israel’s justice minister and chief peace negotiator. The choice was obvious: Livni is the leading voice in Israel promoting a two-state solution to end her country’s occupation of the Palestinians in the West Bank and Gaza. She ran in the recent elections on a platform focused almost exclusively on this issue, which is the core of J Street’s mission statement.

But alongside her strong call for advancing the peace process, Livni also turned to the 2,800-strong J Street crowd with an appeal to keep in minds the threats that Israel is facing and to defend Israeli soldiers in the face of international condemnation. “Believe me, what they are doing is defending the State of Israel and trying to avoid civilian casualties,” she said. Her call, one usually associated with the hawkish side of the political system, won notably less applause than her call for peace with the Palestinians.

In its early days, J Street and its message were largely rejected by the Israeli government. Foreign ministry officials and diplomats were directed to shun the new lobby. Whatever contacts that did exist were kept to the lowest possible government level.

Back then, it was mainly opposition figures who attended the group’s events. Israel’s ambassador to the United States, Michael Oren, refused to participate in the group’s inaugural conference, and later described the lobby as posing a “unique problem” to Israel.

“We are so far past that,” J Street’s president, Jeremy Ben Ami, told reporters on September 29. Indeed, the next evening, as J Street supporters convened for a gala dinner, Oren appeared on the giant screen, delivering a video greeting he prepared for the lobby.

At the conference, J Street hosted for the first time a member of the ruling Likud party, Hanegbi, and a member of Shas, Vaknin, alongside the more obvious supporters of a two-state solution from the Labor Party, Meretz and the new Yesh Atid party.

Hanegbi sought to convince reporters that it was not his views that had changed, but those of J Street. The group, he said, is now “more left-center than extreme.”

That was certainly borne out by the prime time speakers at the full plenary, a forum reserved for more centrist voices. But the group was also careful to preserve places for voices to its left that are rarely heard in mainstream Jewish gatherings. In breakout sessions participants could hear discussions on boycotting Israel and on the Palestinian Nakba — or catastrophe, as Palestinians often refer to the 1948 war that established Israel, which was accompanied by the expulsion or flight of hundreds of thousands of Palestinians from the new state who became refugees. Such forums were a clear sign that J Street is attempting to assure the substantial number of people to its left among the group’s rank-and-file that they continue to have a place.

Hanegbi’s own early years in politics were devoted to fighting Israel’s peace accord with Egypt and to defending Israel’s exclusively Jewish settlements in the occupied West Bank. But he has since become a supporter of a two-state solution. He told J Street’s conference attendees that this was a view he shared with Netanyahu.

Hanegbi dismissed the notion that the Likud is gradually shifting away from this vision and toward one of a Jewish state on all the West Bank.

“There’s a big mistake in using the term ‘two-state solution,’” Hanegbi argued, explaining that many politicians who express opposition to it do not understand the parameters of a future agreement.

Still, leading members of Hanegbi’s party, such as Deputy Defense Minister Danny Danon and Deputy Foreign Minister Zeev Elkin, have spoken out in America and at home against a two-state solution with the Palestinians. Indeed, politicians such as Danon already play a prominent role in supporting hawkish American Jewish groups, not dissimilar to the kind of help J Street now appears to be seeking from public officials to their left.

Still, Sheetrit added a splash of cold water on the face of those hoping for a new era of cooperation with Israel’s political mainstream. “U.S. Jews cannot change the situation in Israel by remote control,” he said. “If you want to make a change, make aliyah.”

J Street, On Political Roll, Reaches Out to Israeli Center — and Even Right