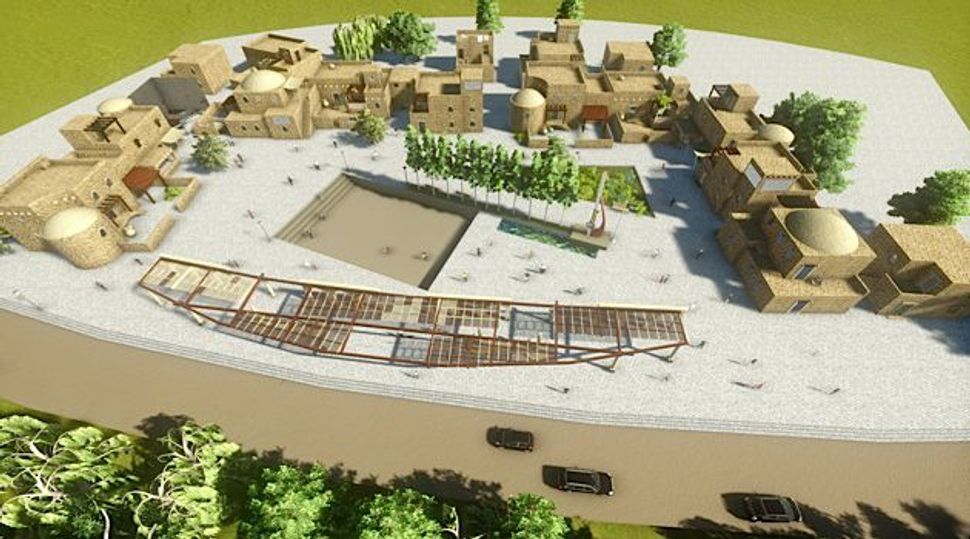 Still on the Drawing Board: Architect Shadi Habib Allah has drafted detailed plans for al-Lajun, a proposed town in Northern Israel for returning Palestinians. Image by Courtesy of Zochrot

With reports that peace talks between Israel and the Palestinian Authority are faltering, figures from the fringes are jockeying to fill the vacuum they believe will result.

As a two-state solution fades, thinkers and activists currently viewed as marginal on both the left and the right, are preparing to wheel out projects that others might view as fantastical or utopian at best. But with the talks sponsored by Secretary of State John Kerry now nearing the halfway point in the nine months Kerry has given them to succeed, the advocates say that now is the time to develop their proposals, however implausible they currently seem.

“There was no point doing this when the whole of the international community was under the magic spell of the two-state solution,” explained right-wing settler activist Dani Dayan, who serves as international envoy for the Yesha Council, the main umbrella group for Jewish settlers on the Israeli-occupied West Bank. “Now, when it is more and more evident that it will not happen, the time is coming to discuss alternatives.”

Activists on both ends of the spectrum envision the formal abolition of the so-called Green Line that marks off Israel’s pre-1967 internationally recognized borders from the territories Israel conquered that year in the Six Day War. And both sides are engaging in detailed advance planning on just what will come in the wake of this erasure.

Last January, a large conference took place to promote Israeli annexation of the West Bank. The Jewish Home party, which sits in the current government coalition, supports the idea. The conference included detailed discussions on what rights Palestinians would have if annexation took place. Speakers presented various ideas, including giving them full citizenship, giving them only permanent residence rights, and granting them residency while insisting that they be granted voting rights in Jordan.

Naftali Bennett, Israel’s economy and trade minister, and other prominent members of the ruling coalition have been pushing a plan under which Israel would annex a part of the West Bank known as Area C. This part constitutes 62% of the territory’s total land area, including its most fertile and resource-rich land, but it contains only an estimated 150,000 Arabs. Palestinians say that Israel has been forcing out the Palestinian population in this sector through denial of building permits and through land expropriations. But Bennett sees the sector’s current demographic character as the basis for launching a new post-negotiations initiative.

“There are 350,000 Israelis living in Area C and only 50,000 Arabs,” Bennett told Israel’s Ynetnews website in February 2012, before his election to public office. “They will become full-fledged Israeli citizens, and according to this plan, no one — neither a Jew nor an Arab — would be driven out of his home.”

Bennett continues to advocate for this idea actively, but now with the clout of a senior minister in the cabinet. This by itself greatly advances the proposal’s move from the fringes into Israel’s mainstream.

At the opposite end of the political spectrum, Israel’s left fringe is trying to break the taboo on Palestinians “returning” to sovereign Israel — and it just held a major conference of its own to discuss how this could work.

The two-day gathering, sponsored by the Jewish-run group Zochrot, advanced the argument that Palestinians with roots in cities, towns and villages that are now in sovereign Israel should be allowed to move back to these areas. In contrast to those who have simply argued this position in the past as a matter of principle, the gathering of 400 people, the majority of them Jewish Israelis, started tackling the specifics of how “return” would work on a practical level. The group even discussed what kind of locales the returners would inhabit.

Palestinian leaders have always insisted that Arabs whose families were expelled from or fled from their homes during the 1948 war that established Israel should have the right to “return” to them. Israeli leaders have always dismissed this as out of the question. The refugees from that war and their descendants — many still stateless — should be allowed to return only to whatever Palestinian state is eventually established in the West Bank and, perhaps, Gaza, Israeli leaders say.

At the Zochrot conference, held in late September, participants debated detailed plans on how at least a portion of those refugees could return to Israel itself in an orderly, planned manner. Palestinian author Salman Natur, a conference attendee, hailed the gathering as a “turning point in the attempt to transform Israeli consciousness” on this question. “Something noteworthy is happening here,” he wrote on his Facebook page.

The establishment of a Jewish discourse that supports a Palestinian return is newer — and much smaller — than the Israeli right’s varied proposals to annex the West Bank. Somewhat ironically, the conference promoting this discourse would likely have gone largely unnoticed were it not for the vocal protests against it by some on the right, and the media’s coverage of the resulting controversy. The Zionist group Im Tirtzu was furious that the Land of Israel Museum, a major, Tel Aviv-based institution that receives government funds, allowed Zochrot to hold the conference on its premises, and Likud lawmaker Ofir Akunis called on the museum to pull the plug on it. But the museum declined to intervene.

There are around five million Palestinian refugees, according to the United Nations Relief and Works Agency for Palestine Refugees. And Israelis tend to presume that almost all would head to Israel given the chance. But speakers at the conference contested this. A “very small minority would actually move back,” Zochrot director Eitan Bronstein said, suggesting that Palestinians now established with citizenship in other countries, such as Jordan, would be unlikely to relocate.

The realistic goal of the conference, he and other organizers said, wasn’t to suddenly make “return” mainstream in Israel, but rather to begin a conversation, and to establish what “return” would actually mean.

Bronstein acknowledged that Israel would no longer have a Jewish majority in such a scenario, but he stressed that Jews would still represent a significant proportion of the country’s citizens.

Amir Asher, a translator who volunteers as a guide for Zochrot’s tours of former Palestinian villages whose structures or ruins remain within Israel’s pre-1967 borders, claimed that the right of return for Palestinians would not be just a concession by Israelis — it would also benefit them. “People always think about return in terms of the damage it would cause from the point of view of Jews in Israel,” he said, “but they never think about it as a good thing.” Asher argued that it would rectify the wrongs he believes were done to Palestinians around the time of Israel’s establishment, and thereby enable Israelis to stop “living a lie.”

At points, the discussion cited Zionism’s triumphant success in absorbing huge waves of immigrants as a source of inspiration for their own goal.

“There is room” in the land for all, Asher said “The [required] space is vacant; the country can support this number of people.”

Some conference sessions examined detailed plans that have been drawn for an era of Palestinian “return.” This reflected another parallel between how some on the right and left fringes look to the future: Both steam ahead with planning the details, even if the path to making them relevant is far from clear. For both groups, the objective of the details is to revive a lost past for future generations.

On the right, a not-for-profit organization in Jerusalem called the Temple Institute has even made, in accordance with biblical specifications, some of the vessels that it believes will be needed when the Jewish Temple is restored, including the menorah, the incense altar and the showbread table. The organization also completed the sacred uniform for the future high priest to wear. It has done all this even though most rabbis believe that the Temple, which stood on the sacred Jerusalem site now occupied by Islam’s Al Aqsa Mosque, will be rebuilt only in a Messianic era.

In Umm-al-Fahm, Israel’s largest Arab town, a group of 18- to 30-year-olds has worked with an architect to develop a plan for resurrecting the village where their grandparents lived until 1948 as a town for the future. The project, initiated by Zochrot and some other nongovernmental organizations, envisions a town that they believe could welcome Arabs from the West Bank, Gaza and the Palestinian Diaspora.

The Umm-al-Fahm visionaries, with the support of Baladna: The Association for Arab Youth, engaged an architect, Shadi Habib Allah, who presented his plan for the town of al-Lajun at the conference. The town would, in the activists’ dream, be developed on the site in northern Israel where a village of the same name stood until 1948. Habib Allah worked on the plan full time for three months.

The housing in Habib Allah’s plan is modern and Western-style to serve modern requirements. But with the hope of easing the transition for residents arriving from the Arab world, the town center is planned in the traditional Palestinian style, with low buildings, domes, stones and cobbles.

“People have heard so many stories from their grandparents, so we didn’t want to create a modern village of just steel and glass,” Habib Allah said. “There needs to be a sense of memorial.”

The plans embrace a future of coexistence, as well. Signage appears in Hebrew and Arabic, indicating that Jewish visitors are expected. Habib Allah hopes that a planned industrial zone could be a joint project with local Jewish communities.

Nobody has any easy answer for when and how any of this could become a reality. But Asher is in it for the long haul. “This vision could take 100 years, and it could take 150 years, but it’s very important to start laying the groundwork,” he said.

Bronstein offers a slightly clearer scenario. He believes that the Israeli public will never be won over for a grassroots change, but that in the absence of an end to the Israeli-Palestinian conflict, pressure will mount on Israel to pay attention to the Palestinian call for “return.” He expects the leadership to realize that it has no choice but to respond positively to pressure and effect a change from the top, “something similar to in South Africa.”

Echoing Dayan’s right-wing conviction that one state is now the only option, he said, “The two-state solution has gone a long time ago.”