Anger and Indifference as Africans Immigrants March in Tel Aviv 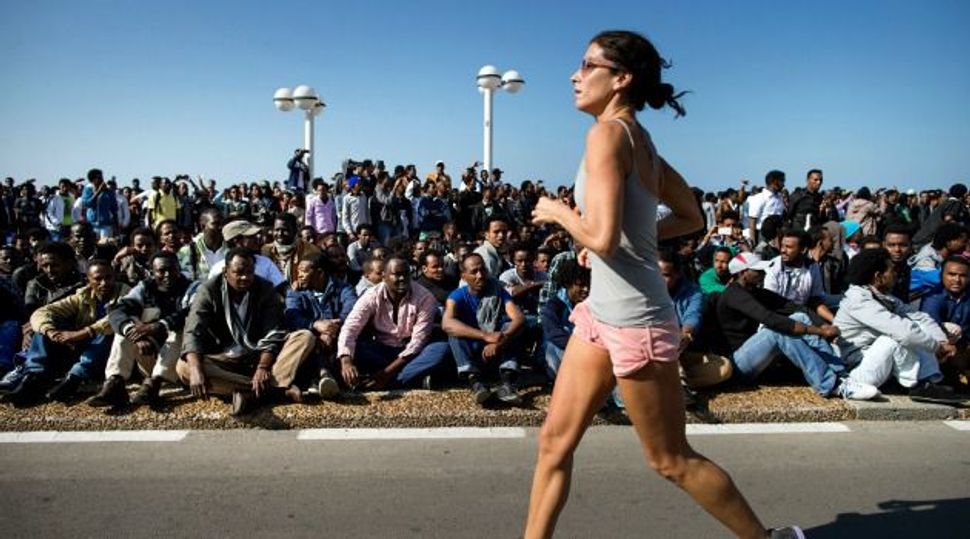 Paying No Mind: Thousands of African immigrants rallied for their rights in Tel Aviv. Some Israelis praised the protests, others objected, and some simply went about their business as usual.

(JTA) — They marched down Allenby Street today, past the market and the traffic jam of buses and cabs, their chants echoing around buildings and into courtyards.

“What we want?” one man yelled.

Most of them Eritrean, most of them men, the crowd swelled as it reached the beach and turned right up the boardwalk, filling the bicycle lane and leaving only a narrow path for pedestrians. Opposite the concrete facade of the U.S. embassy, they stopped, sitting in rows, forming lines on the side of the street, now numbering in the thousands. Some crossed their hands above their heads, as if bound. Others wore white T-shirts with the words “No more prison! We want freedom!” printed in black around a picture of hands in handcuffs.

The Israeli government calls them infiltrators, and says they are young men who have willingly left economic hardship in Eritrea and Sudan for the promise of employment and a decent salary in Israel.

The government has portrayed the 55,000-person African migrant community, most of whom live in the poor neighborhoods of south Tel Aviv, as a demographic threat to the Jewish state and has called for them to leave. Last month, the government opened a detention center in southern Israel for the migrants.

Monday’s march, on the second day of a three-day strike, aims to tell a different story about the migrants, whose chant “We are refugees!” encapsulates their fight with the government.

The migrants say they have come to Israel escaping totalitarianism, abuse and war. If they return to their homelands, they say, they will be killed.

They want Israel to recognize them as refugees under international law and to allow them to work and live in the country legally — a status European countries have afforded many Eritreans and Sudanese.

So, beginning Sunday, the migrants went on strike by the thousands, leaving their jobs as street cleaners, custodians, factory workers and in restaurants and hotels. Yesterday they filled central Tel Aviv’s Rabin Square, a public space seemingly made for mass protest.

Today, they took their cause to the embassies, protesting in front of America’s and France’s diplomatic headquarters opposite the beach. They waved Eritrean, U.S. and Israeli flags.

“I wanted a good life in a state that could take care of me,” said Danny, 27, who arrived in Israel five years ago from Eritrea and now works in a pastry factory in the southern Israel town of Yehud. “They think I’m an infiltrator. If we’re strong and we continue, things will change.”

A handful of Jewish Israelis stood in the crowd, most but not all of them representing migrant aid nonprofits.

“What’s happening here is distressing,” said Elana, 22, an art student from the central city of Petach Tikva. “There are very few Israelis lending active support. I think it’s amazing that [the migrants] are taking things into their own hands.”

But not all Israelis present were supportive. A woman watching from across the street muttered “God keep us,” while three electricians taking a lunch break near the scene all said they wanted the government to send the migrants back to their home countries.

And on the edge of the crowd, former far-right Knesset Member Michael Ben-Ari stood arguing with migrants.

“You’re all robbers, thieves,” he said. “Go back to Africa. Israel needs to defend itself. Israel is a Jewish state.”

Current government policy will satisfy neither the migrants nor Ben-Ari. Speaking to his Cabinet Sunday about the first day of the strike, Prime Minister Benjamin Netanyahu said that Israel would continue to prevent migrants from entering the country, and would encourage those who have entered to voluntarily self-deport.

“I would like to emphasize that these are not refugees, but people who are breaking the law and whom we will deal with to the fullest extent of the law,” he said. “We will continue to deport the illegal migrants from our cities.”

Anger and Indifference as Africans Immigrants March in Tel Aviv