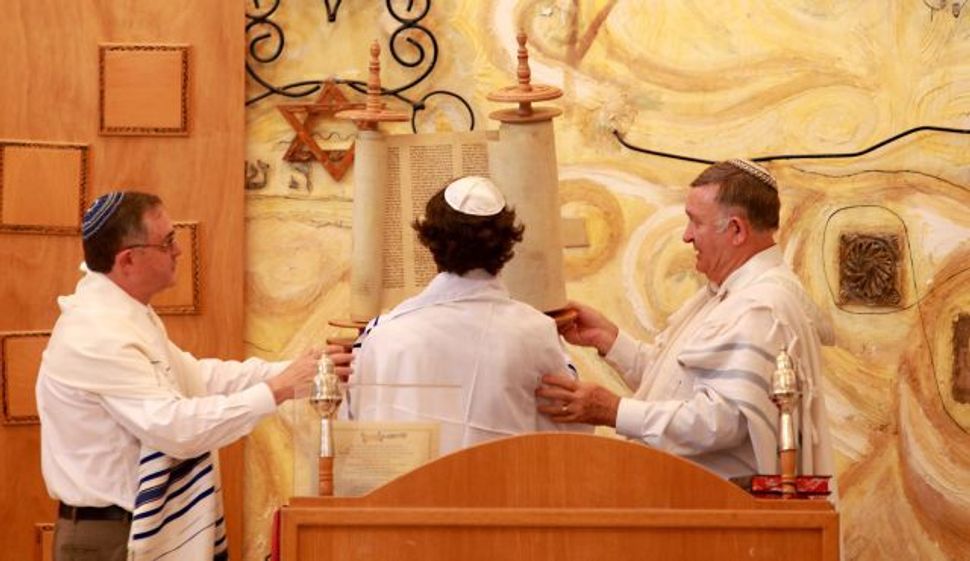 The R Word: A bar mitzvah is held in a Tel Aviv reform temple. Why do Israelis feel a stigma is attached to the movement’s name? Image by Gil Cohen-Magen/Haaretz

(Haaretz) — When the Reform movement recently opened its first congregation in the Negev capital of Be’er Sheva, its members had just one little request: They didn’t want to be called Reform.

They’re not alone. Although the Reform movement has been making considerable inroads in Israeli society in recent years, it turns out its name still carries a stigma. And while many Israelis like the idea of a more open and inclusive form of Judaism, they prefer to distance themselves from the movement’s official designation.

“There have been many attempts among the Orthodox over the years to trash our name,” says Anna Kislanski, director of community development at the Israel Movement for Reform and Progressive Judaism. “And that’s why some Israelis are still reluctant to be associated with us.”

The new Be’er Sheva congregation receives financial and other assistance from the Israeli Reform movement, and men and women sit together during services there as they would at any Reform congregation abroad. But its members prefer not mentioning the “R” word when advertising their Friday evening service to welcome the Sabbath. Rather than describing it as a Reform service, they call it an “Israeli family Kabbalat Shabbat.”

Up north, on Kibbutz Beit Hashita, a similar arrangement was made to accommodate newcomers uncomfortable with the term Reform. A female Reform rabbi conducts services and other life-cycle ceremonies for members of the small but growing congregation at this otherwise secular kibbutz. They just don’t use “Reform” to describe their affiliation.

“I understand their issues,” says Kislanski, “but one thing I refuse to give up is having our logo appear. The whole point, after all, is not to be ashamed of who we are.”

There was a time, she recalls, when the local Reform movement tried to distance itself from its international parent organization by calling itself The Israeli Movement for Progressive Judaism. But the word “Reform” was eventually put back in the name.

Rabbi Gilad Kariv, the executive director of the Reform movement in Israel, said in response that he was aware of the phenomenon.

“Naturally, after years of incitement by the rabbinical establishment, there are many Israelis who believe in our values and are interested in the congregational activities we offer, but are suspicious of the term Reform Judaism,” he said.

At the same time, he noted, a change in attitudes was now evident. “The reality is changing quickly, as evidenced by the growing number of our congregations that identify as Reform right from the start,” said Kariv.

“There may be Israelis reluctant to come to these congregations initially, but we believe this is the best way to change the discourse about Jewish identity in Israel and address preconceptions,” he added.

He cited a recent study that showed more than 250,000 Israelis identifying themselves as Reform Jews as “proof of our growing success in fulfilling a function in Israeli society, without apologizing or masquerading.”

Kislanski explains that, until five years ago, the number of Reform congregations in the country had remained steady for an extended period of time, numbering about 25. But in 2009, hoping to build on the momentum of Jewish revivalism sweeping the country, the movement launched a major expansion campaign.

Since then, 17 new congregations have been founded with its support. These include congregations in Rosh Pina, Caesarea, Even Yehuda, Gedera, Beit Hashita, the Sha’ar Hanegev Regional Council, Be’er Sheva and Shoham, as well as new ones in Jerusalem, Tel Aviv and Haifa, where the movement already had a presence.

In addition to these 17 new congregations, the Reform movement also helped organize Yom Kippur prayers for the first time last month at four new venues, among them Binyamina and Kfar Sava.

Reform congregations in Israel receive much of their funding from the local movement, Jewish federations in North America and individual congregations abroad.

According to Kislanski, this outside funding is required at the initial stages since Israelis are unaccustomed to paying dues at their local synagogues, and therefore tend to be averse to the concept.

“It takes a few years before they get used to the idea of self-financing, either through dues or through other services they provide,” she says. “Once they reach that stage, we can start reducing our share of funding.”