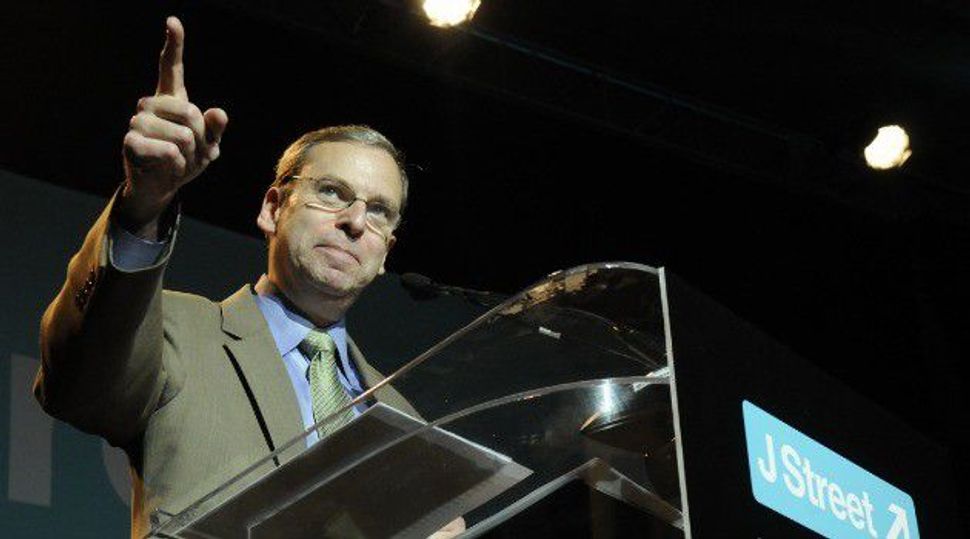 Emboldened by President Obama’s public rebuke of Israel’s recently re-elected leader Benjamin Netanyahu, the dovish lobby J Street is stepping up its criticism of the prime minister and, at the same time, highlighting the differences between its views and those of mainstream Jewish community organizations.

The 3,000 activists gathered in Washington over the weekend for the lobby’s fifth annual conference wished their confab could have taken place under different circumstances. J Street and its supporters have never made a secret of their opposition to Netanyahu and his policies. They had hoped their gathering would be a celebration of the political victory of Israel’s center-left camp, but reality had other plans, not only crowning Netanyahu for his fourth term in office, but also doing so on the waves of a rejection of the two-state solution, J Street’s raison-d’etre.

Leaders of the group sought, however, to shift the atmosphere from communal commiseration to the creation of a fired-up opposition to the policy of Israel and of most other Jewish organizations.

For J Street, which has spent much of its first five years trying to make its way into the Jewish-American mainstream and to battle claims it was outside the Jewish tent, the new reality now means it is time to break to the left, endorsing policies the group has rejected in the past and challenging the status quo head on.

“It’s a fight. That’s something we’ve come to accept,” said president Jeremy Ben-Ami. “We’re not all going to agree.”

In terms of policy, taking on the fight means stating J Street’s open support to moving the Israeli–Palestinian conflict to the United Nations Security Council, a move the Israeli government strongly opposes, fearing it would impose an agreement rather than have both sides negotiate directly. In his opening night speech on Saturday, Ben-Ami made clear that J Street is “very glad to hear the Obama administration is reconsidering its approach to the Israeli Palestinian conflict.”

When the Palestinians first took their case to the U.N. in 2012, J Street fell in line with most other pro-Israel groups in opposing the move. The Obama administration used its diplomatic clout at the time to block the Palestinian initiative.

Now, with Obama stating that Netanyahu’s rejection of the idea of creating a Palestinian state has prompted the administration to “evaluate what other options are available,” the dovish lobby is, for the first time, advocating the option of an international solution to the conflict.

This position puts J Street at odds with most other pro-Israel organizations, led by the American Israel Public Affairs Committee, which have been preparing to lobby against the administration’s move and to make the case that Netanyahu has adequately explained his position and has not withdrawn his support for a two-state solution.

Taking a proactive, albeit symbolic approach to the two-state solution, J Street has also launched an effort to reclaim the difference between Israel proper and the Palestinian territories occupied by Israel in 1967. The group has called on Jewish organizations, federations, Hillel chapters and synagogues to make sure the maps of Israel they display clearly show the Green Line marking the 1967 borders.

The group is also calling on the U.S. government, Ben-Ami said, to “examine how it can eliminate funding” to Jewish settlements in the West Bank by taking a closer look at how government agencies provide funding to Israel and the way the IRS views donations going to settlements. J Street called on its members and supporters to make sure the Jewish charitable organizations they donate to do not support settlers beyond the Green Line.

J Street’s main challenge now is ensuring their activists, many of whom are students, do not fall into despair following the Israeli elections and give up on the chances for achieving a two-state solution.

“We see adversity as a call to action. This is no time for progressives to withdraw,” said Rabbi Rick Jacobs, president of the Union for Reform Judaism, in his keynote speech that opened the conference. “In the next few years, as the leaders of Israel, the Palestinians and America make crucial decisions on issues related to the future, our voices must be heard.”