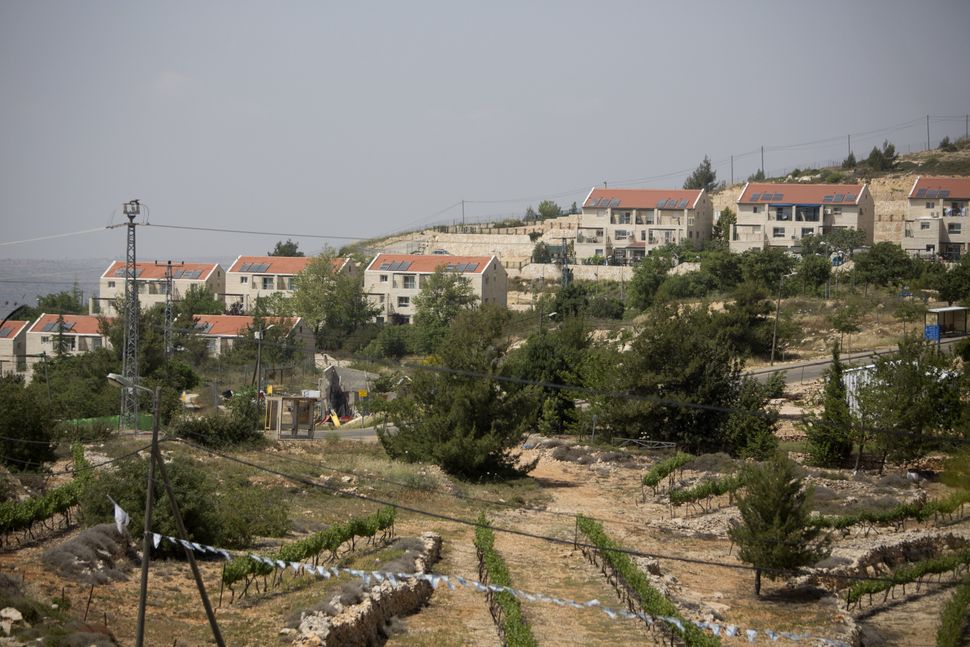 On a weekday night in Beit El, dozens of teenage boys were packed into the study hall at the settlement’s new yeshiva, a tan stone building with a zig zag facade. It was a brisk night on the hilltop, and their coats and backpacks were scattered in the hallway.

The yeshiva is Beit El’s crown jewel, where some 350 students learn in three different programs, including one that allows them to study religious texts while they prepare to join the Israeli army. The yeshiva sets Beit El apart from other settlements as the “Harvard of Jewish education in Judea and Samaria,” said local council member Chaim Silberstein, using the biblical terms for the West Bank.

The students’ education is underwritten in part by a man most of them have never heard of, yet whose name has been in the headlines for weeks. David Friedman, a lawyer, is president-elect Donald Trump’s pick for Israel envoy, and the volunteer head of American Friends of Beit El Institutions, which raises about $2 million a year for the settlement, according to Haaretz. 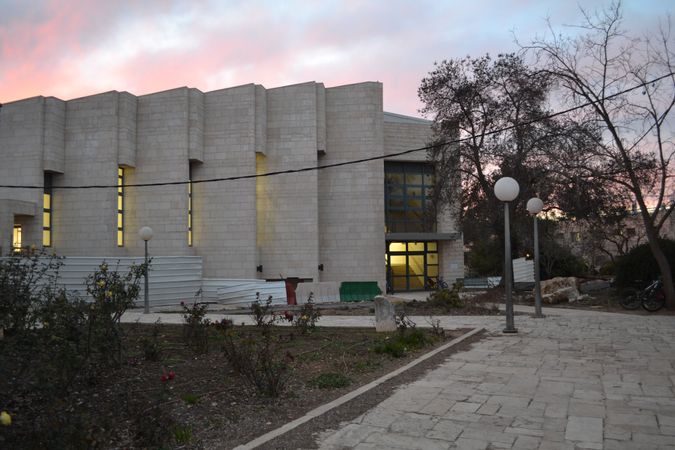 The new yeshiva in Beit El. Image by Naomi Zeveloff

Friedman’s ardent support for the settlements places him at odds with decades of U.S. foreign policy in the region to promote a two-state solution for Israelis and Palestinians. Settlements like Beit El, which are illegal under international law, have eaten up land that Palestinians claim as their own, making a contiguous Palestinian state impossible without evacuating hundreds of thousands of Israelis. Yet Friedman has insisted that the settlements are no obstacle to peace. He did not return requests for comment for this story.

Out of 131 settlements in the West Bank, Beit El, a nationalist religious community of about 7,000, is Friedman’s pet settlement. Located atop a hill near the Palestinian city of Ramallah, Beit El has the feel of a family-friendly Orthodox suburb, where children leave their bikes unlocked on the sidewalk and the main roundabout is decorated with three-foot tall sculptures of pomegranates, grapes and figs. Hebrew signs caution drivers to watch out for kids crossing the street.

Yet to Friedman, Beit El less a sleepy suburb than a front line against Israel’s enemies. He has called Beit El a “critical component in our collective battle for the safety, security, and unity of the State of Israel,” according to Haaretz. 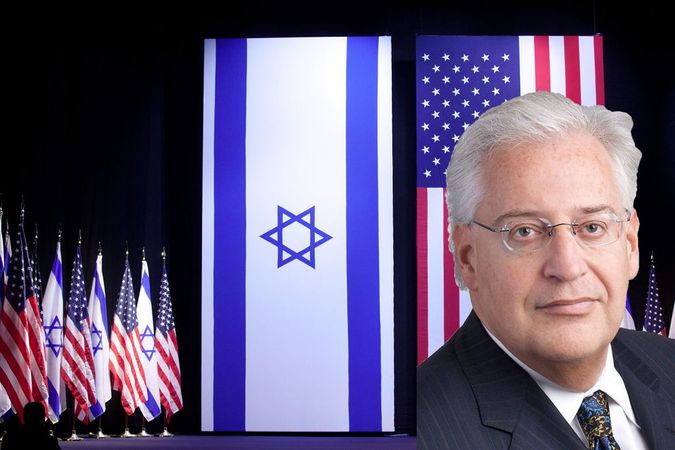 Friedman likely inherited his affinity for Beit El from his late father, Morris Friedman, a New York rabbi and Beit El supporter whose name is plastered in black capital letters on the exterior of a girls school in Beit El. According to Silberstein, Morris Friedman came to support Beit El through Ya’akov Katz, a onetime Knesset member known as “Katzele” who founded Beit El’s storied yeshiva.

With his long white beard and a wide moustache, Katz is a of legendary figure in Beit El. Badly injured as a soldier in the 1973 Yom Kippur War, he was evacuated from the battlefield by Ariel Sharon, then an Israeli military commander. He went on to help establish Beit El. Katz did not return multiple calls from the Forward.

Though most Beit El residents had never heard of David Friedman, word quickly spread around the settlement about the possibility a hometown champion in the embassy after Trump announced his appointment in December.

“The feeling was that finally, finally, we might get some kind of recognition and fair treatment” after U.S. President Barack Obama’s harsh attitude toward settlements, said Silberstein.

In addition to the Friedman appointment, Beit El’s settlers are celebrating for another reason in 2017. This year marks the 40th anniversary of Beit El’s founding. The local municipality has created a special logo for the occasion, featuring an image of a wavy Star of David, a statue of which stands at Beit El’s gate, with exploding fireworks in the background. “A dream came true,” it says in Hebrew.

Beit El was founded in 1977, by adherents of the Gush Emunim, or Block of the Faithful movement, who believed they were fulfilling God’s promise by settling the West Bank, which Israel captured from Jordan in 1967. Beit El was the “Mayflower” of the West Bank, said Bobby Brown, a settler and political commentator. Like the English pilgrims to the New World, the settlers saw themselves as pioneers who were charting a course that would change history. They were drawn in particular to the hill outside Ramallah believed to be the site of the biblical patriarch Jacob’s dream.

The first 30 families moved to a military outpost near the site, which was built on private Palestinian land seized by the Israeli government. Facing pressure from the United States not to settle the West Bank, Israel’s then-Prime Minister Menachem Begin prevented the settlers from starting their own community at first, said Hagi Ben Artzi, a Beit El founder, professor and the brother of first lady Sara Netanyahu. But a year later, Begin relented and the settlement of Beit El took root.

That same year, in 1978, the Israeli Supreme Court ruled that Beit El’s settlers could stay even though they were squatting on private Palestinian land, judging the settlement necessary to Israeli security. This ruling applied to many of the early settlements, said Lior Amihai, the head of Peace Now’s settlement watch program, but it was short-lived. The next year, the Supreme Court changed course and ruled that the army could confiscated private Palestinian land for military purposes, but not for civilian settlements. Most settlement building since then has been on what Israel deems “state land” in the West Bank.

In the first years, the “pioneers” lead a hardscrabble life, said Ben Artzi. About 60 families lived in caravans on the hilltop with no utilities, using gas stoves to cook their food and warm themselves against the high altitude chill. In the 1980s, with the support of then-Prime Minister Yitzhak Shamir, the settlement was hooked up to water and electrical lines from Jerusalem. The settlers moved out of their caravans and into single family homes.

Over the years, Beit El settlers have moved into areas beyond the settlement’s original borders onto private Palestinian land, sometimes using forged documents to prove ownership of the land. Israeli human rights groups have filed lawsuits in Israeli court to evacuate settlers in these areas. In the most famous case, regarding the Ulpana neighborhood of Beit El, the Israeli government agreed to build 90 new housing units inside Beit El’s original borders that would house the evicted families, even though there were only 30 of them.

Today, Beit El is considered one of the most established Israeli settlements in the West Bank, with 20 kindergartens, and several secondary and high schools in addition to the vaunted yeshiva. Beit El has a furniture factory, a winery, a public swimming pool, a women’s clothing store and a bakery run by an immigrant from Tennessee whose hamanteschen and doughnuts have won best-of-Israel awards from the Jerusalem Post. The community’s grocery store, which shares a parking lot with the King David Steak House, sells produce, dry goods and velvet carrying cases for prayer shawls and phylacteries.

One area the settlers weren’t allowed to develop, said Ben Artzi, was the site where Jacob’s dream supposedly occurred, a slab of tan stone on the outskirts of the settlement. Ben Artzi and others had wanted to turn it into a synagogue, but since the site is holy to Muslims and Christians as well, the Israeli government worried that a Jewish house of worship there would spark a religious conflagration, like the one embroiling the Temple Mount, he said.

Instead, the site has been transformed into a modest tourist site, with Hebrew and English signs marking “Jacob’s rock” as well as an ancient oak tree, a burial cave and a crumbling stone building that once served as an Islamic prayer house and a Christian chapel.

The site is still a spiritual draw for settlers, such as Yehuda HaKohen, a 37-year-old teacher who runs dialogue groups between settlers and Palestinians. After years of defying the Israeli government by establishing illegal outposts on West Bank hills, HaKohen decided to settle down in Beit El with his family in 2009. He lives in a caravan trailer with a red couch, a collection of books that includes Che Guevara’s biography, and a large painting of the Jewish Second Temple on the wall.

“It is powerful for me to live in a place like this,” he said. “A lot of my peoples’ story took place here and is taking place here.” 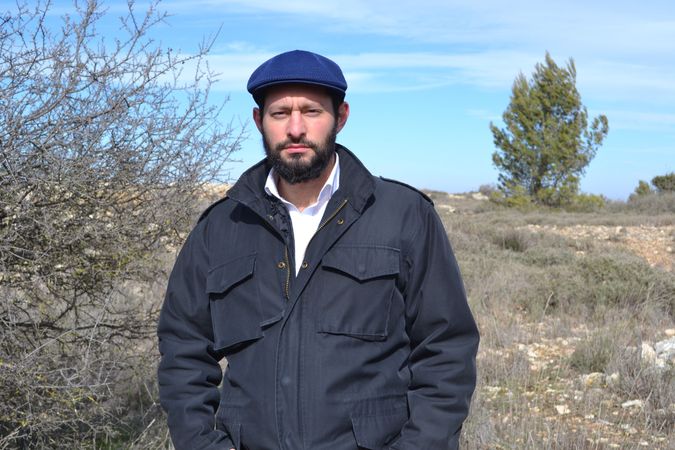 Yehuda HaKohen has lived in Beit El since 2009. Image by Naomi Zeveloff

When HaKohen first moved in, his neighbors furnished the trailer with beds, an oven, a refrigerator and a table and chairs to ease the new family’s arrival since HaKohen was unemployed at the time. His neighbors, he said, are some of the most selfless people he has ever met. But he laments that their generosity doesn’t seem to extend to the Palestinians in their midst, which he attributes to the fact that many settlers have lost loved ones to Palestinian violence over the years.

Indeed, anti-Arab attitudes are not difficult to encounter in Beit El. The Chief Rabbi of the settlement, Zalman Melamed, has said that Arab citizens of Israel should be stripped of national voting rights if they strive to “undermine the country,” according to a report in Israel’s Yedioth Ahronoth. Ben Artzi went even further and called the Arab right to vote in Israel a “mistake,” saying that they should only have the right to elect local, not national leaders.

Many Beit El residents also complain about Obama. According to Beit El’s spokeswoman Yael Ben-Yashar, there is high demand to live in Beit El, but with Obama’s attempts to freeze settlement building in Israel, Beit El has not expanded apace. 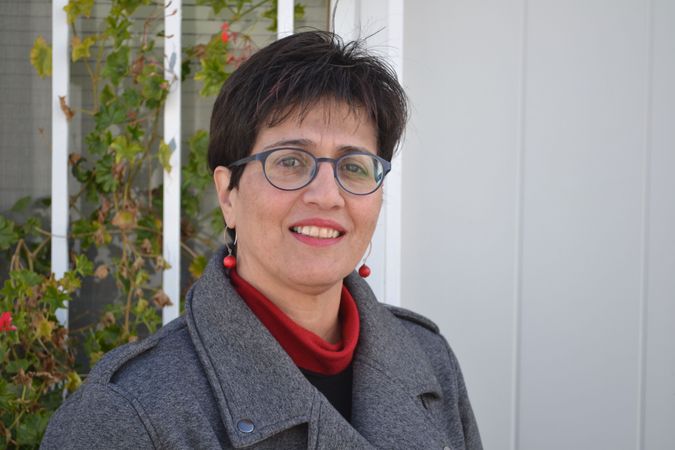 Sitting in her office in Beit El’s municipality, where a plastic topographical map of Israel and the West Bank — sans a border separating the two — hangs on the wall, Ben-Yashar cited her own family’s predicament as an example of the housing shortage. All four of her children have been married in the last few years, but only one of the three couples found an apartment in Beit El.

In fact, recent reports show that Obama didn’t succeed in halting settlement building — almost the same number of units were built under Obama (13,000) as under his predecessor George W. Bush (14,636). Even Beit El has seen some growth in recent years. According to Peace Now, the settlement has added 56 new units in the past seven years.

Yet in Beit El and beyond, the perception remains: settlements were marginalized in the Obama era. Now with Friedman poised to take the ambassadorship under Trump, she believes that Beit El will grow again. And as Beit El grows, the chances for a Palestinian state will shrink.

In Ben-Yashar’s eyes, Friedman won’t just be an envoy to Israel. He’ll be the ambassador to Beit El.

“We think that David Friedman is going to be our representative in the United States,” she said.