At BYU Seder, Mormons Dip, Eat, Sing Their Own ‘Dayenu’ 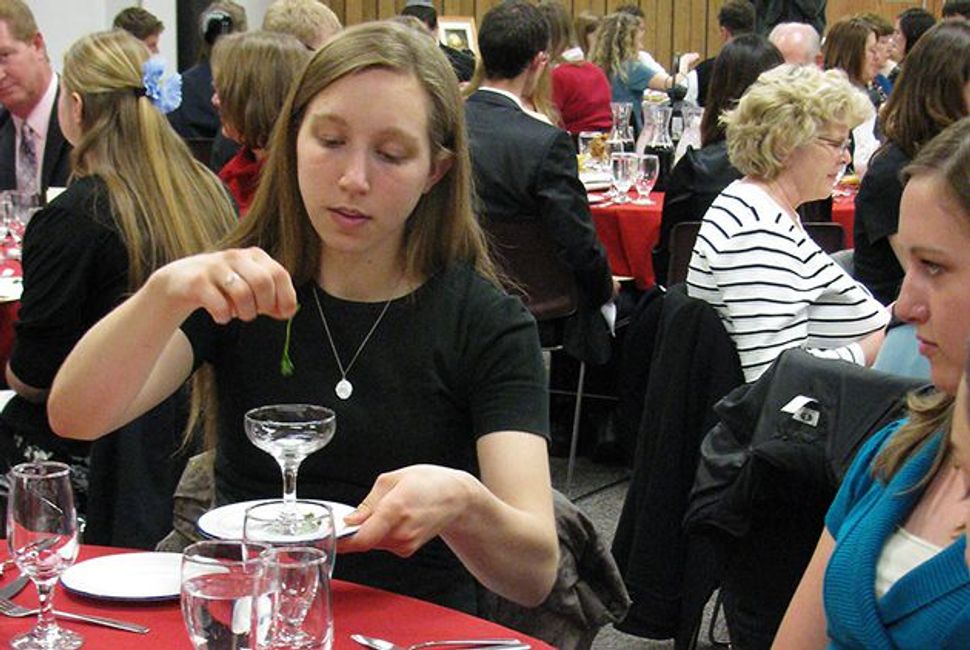 Why Is This Night Different?: Since Mormons abstain from liquor, the four cups of wine were filled instead with grape juice at this recent Seder. But students still dipped parsley in salt water, tasted bitter herbs, and ate matzo sandwiches. Image by GABRIELLE BIRKNER

Inside the student center, the tables were set with all of the Passover staples: bitter herbs, haroset, parsley sprigs and salt water, a Haggadah at each place setting. By 6:15 on a recent Friday evening, the hall had filled up with college and graduate students, alumni, faculty and a smattering of “townies” — more than 160 people in total. It was a scene reminiscent of the Seders that so many Jewish campus centers host at Passover time.

But this was no Hillel-sponsored event, a fact that would become apparent as soon as the invocation was given “in the name of Jesus Christ.” Rather, this Seder was hosted by Brigham Young University, the flagship school of The Church of Jesus Christ of Latter-Day Saints.

Seders have become a tradition at BYU, where nearly 99% of its 33,000 students identify as Mormon, and where, according to a university spokeswoman, there are only three Jewish students.

This year, BYU is sponsoring seven springtime Seders. Each of them is capped at 165 people, and all are sold-out affairs with long waiting lists, said Victor Ludlow, a BYU religion professor who has been organizing campus Seders for almost four decades.

“I do so many of these here,” Ludlow said, “that the Salt Lake rabbi — we were on a radio program together for the Easter-Passover season — said: ‘Professor Ludlow, here, I call him the Passover Patriarch of Provo. He does more Seders than anyone I know, except, maybe, Elijah.’”

At two recent Seders, which Ludlow led from behind a podium draped in an Israeli flag, the professor explained the symbolism of the Seder plate and the afikomen, guided the youngest guest through an English translation of the Four Questions, and asked attendees to read aloud the story of the Israelites’ epic journey from slavery to freedom. Ludlow had everyone alternately rapt and roaring with laughter. He peppered his explanations with anecdotes about getting matzo and peanut butter sandwiches stuck to the roof of his mouth, and how, some years back, one shrewd young Seder guest, in exchange for handing over the afikomen, convinced her grandparents to take her with them to Hawaii.

Then there was the eating of the salt water-dipped parsley, the tasting of the bitter herbs — first-timers could be seen wincing and reaching for their water glasses — and the building of “Hillel sandwiches,” out of matzo, horseradish and haroset. And, finally, more than two hours after the Seder began, a chicken-and-latke dinner was served.

Most of those in attendance were participating in a Seder for the first time, though several local families said that these Passover meals have become a springtime tradition. The vast majority of guests were Mormons, but some of them touted their Jewish roots — sharing stories of their own conversion, or how their parents or grandparents had joined the Church years ago.

“My grandfather was a Jewish convert to Mormonism,” said Ryan Caplin, a 21-year-old BYU freshman, who came to the Seder with his parents, two of his siblings and their respective spouses. “I wanted to learn more about my heritage, because it’s interesting — and because, even though I’m not Jewish, it still applies.”

After the meal, Ludlow had Seder-goers participate in a series of responsive readings, rise in anticipation of greeting the prophet Elijah, and sing along to a soulful rendition of the Passover classic “Who Knows One?” It was all very traditional, even if the Manischewitz was nowhere to be found, since Mormons strictly eschew alcohol; the carafes were filled with grape juice.

In many ways, BYU is a typical college: Students cram for exams, fill the football stadium for home games and eat pizza late into the night. In other ways, though, the school sets itself apart: Those enrolled must adhere to a strict honor code that demands they abstain from using profanity, drinking coffee, tea and alcoholic beverages, engaging in homosexual behavior, and having sex outside of marriage. (The school’s honor code garnered national media attention last month, when star basketball player Brandon Davies was booted from the BYU team, after he reportedly admitted to having sex with his girlfriend.) Men are required to keep their hair closely cropped and are forbidden from growing beards or sporting body piercings; women cannot wear strapless, backless or form-fitting fashions, and are to avoid “extreme” hairstyles and colors.

The genesis of the Passover Seder on this G-Rated campus was Exodus. Specifically, it was a series of lessons that Ludlow was teaching, back in the fall of 1973, on the second of the five books of Moses. “I found that my students had a hard time connecting to the Old Testament time period and events,” Ludlow said. “I decided to do it just so they could have a cultural experience, so they could socialize a little bit and identify with that important event of the Bible.”

Since that first gathering happened to coincide with the Yom Kippur War, Ludlow brought with him a small radio so that, during breaks, he could tune in to the latest news about the conflict.

Ludlow, a lifelong Mormon who graduated from BYU and earned his Ph.D. at Brandeis University, has traveled to Israel at least once a year for decades; he sometimes stays for months at a time to teach at BYU’s Jerusalem Center for Near Eastern Studies. He said, however, that attitudes of Mormons toward Israel tend to be more complicated than those of many Evangelical Christians, who are often unflaggingly supportive of Israel.

“As Latter-Day Saints, we believe that the Jews coming to Israel and establishing a state is a fulfillment of prophesy… but that doesn’t necessarily justify the means by which they’re doing it or how they may treat other peoples,” Ludlow, who is critical of the concrete security barrier that Israel has erected, told the Forward.

Watch a video of a Brigham Young University Seder:

But it is the journey to ancient Israel, rather than the politics of modern Israel, that are the focus of Ludlow’s Passover meals.

The first time Ludlow organized a Seder on campus, he said that many of his students asked if they could bring along roommates, friends, family members and significant others. “We made accommodations for that, but the next year the boyfriend, the roommate, the cousin would come back, even if they weren’t a student of mine, and they would want to bring somebody else with them,” he said. “It just kept growing.”

Within a few years, BYU agreed to sponsor the Passover meals, and opened them up to the general public. Soon Ludlow was fielding Seder requests from Mormon wards, or congregations, across the Southwest; this year, he will lead Seders for Mormon crowds in Arizona, Texas, Idaho and nearby Salt Lake City.

Ludlow said he would continue to host campus Seders, even after he retires from academia this spring.

While it has become increasingly common for Christian groups to host Passover Seders — both because of a hunger to connect with Christianity’s Jewish roots and because of the belief that Jesus’ Last Supper may have been a Seder — for Mormons, the ritual meal has additional significance: Many of them identify with the Exodus narrative, given their ancestors’ flight from the Midwest to their own “Promised Land,” in Utah.

For BYU junior Ken Kenworthy, 22, the bitter herbs on the Passover table recall not only the suffering of the Israelites under Pharaoh, but also the past suffering of the Mormons. “Our early church history had a lot of persecution,” Kenworthy said. Mormon pioneers, like the Israelites before them, “sacrificed a lot for faith, and were ultimately willing to make a long journey” to freedom.

Kenworthy, whom Ludlow tapped to lead the musical portions of this year’s campus Seders, said that the Passover story “reinforces my faith in God’s ability to work the same yesterday as he does today.”

For freshman Amy Underwood, 18, who this year attended her first-ever Seder, the event’s value was largely its outreach potential. “I think it shows that we’re not just Mormons doing our own thing,” she said. “It shows that we’re open to different cultures.”

The American-born religion, which today claims 14.1 million adherents worldwide, thanks in part to its aggressive missionary work, remains mysterious to many. That may be about to change, with Mormons set to play a prominent role in national politics over the next year. Former Massachusetts governor Mitt Romney has launched a presidential exploratory committee, while fellow Church member Jon Huntsman Jr., who recently resigned his post as America’s ambassador to China, is also considered a potential candidate for the Republican nomination. Meanwhile, in New York, audiences are getting a satirical take on Mormonism, thanks to the Broadway musical “The Book of Mormon,” which opened last month to rave reviews.

More than 2,000 miles from the Beltway and Broadway, Ludlow said that he hopes his Seders serve not only to bring ancient history to life, but also to debunk cultural stereotypes and break down barriers between the Mormon and Jewish communities. “What we need to do is come to learn about each other as we really are, and this is one of the things that is a little bridge,” he said, noting that Mormons and Jews are increasingly inhabiting the same communities, as more Mormons move East, and Jews move West. “As long as we’re going to start being neighbors and working together on PTA committees, why not understand each other a little before we even meet?”

At BYU Seder, Mormons Dip, Eat, Sing Their Own ‘Dayenu’