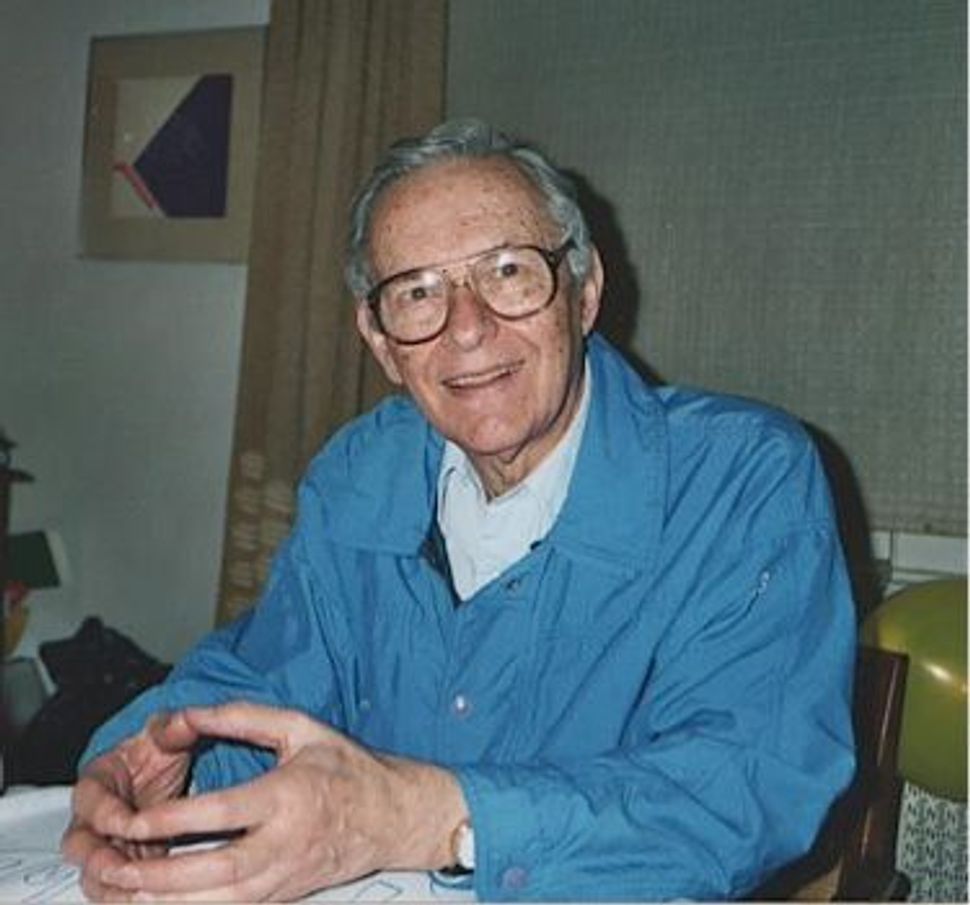 Image by Courtesy of Karen Steinfeld

Toward the end, as he lay dying, pretty much all I wanted to do was make him laugh. I called him every week with a line or a joke or a story he might find funny. I plied him with levity. And laugh he often would. Even so, I suspected that as I tried to humor him, he was actually humoring me. Together, we whistled in the dark.

Somehow I got the idea that if I could just keep him laughing, maybe I could keep him alive. Scheherazade, the Persian queen who told tales for 1,001 nights to save herself from beheading, would have nothing on me. If I could just make him laugh often enough and hard enough and long enough, it would lengthen his life by 1,001 nights and maybe even save him from cancer. We would strike a deal. Just as I kept him going, he would keep me going, too.

But instead Stanley Siegelman, my friend, my editor and mentor, my surrogate father, my tribal elder, died last week anyway. Stanley, a father and grandfather, a World War II veteran, an award-winning editor with Hearst and Fairchild magazines and a long-time contributor of whimsical poetry to the Forward, had just turned 87 years old.

We knew each other for 34 years. Stanley hired me, then age 25, to write for the pharmacy magazine he ran. For four years he gave me heavy doses of the praise and encouragement I then most needed as a young writer. I invited him and his wife Shirley to our wedding two years later. After I left the magazine to freelance full-time, he referred business to me.

We stayed in particularly close touch over the last 10 years, after Shirley died. Right around then he started composing his poems for the Forward, perhaps to ease his grief. He loved to pun, compulsively so – years earlier he wrote an article about insect repellents that began, “Let us spray” – and saw the English language as a playpen for rhyme.

His whimsical poems addressed anything and everything Jewish that twanged his funny bone — the Eliot Spitzer debacle, a Brooklyn restaurant named Traif, you name it. He often told me of a poem in the works or just submitted and about to appear. Once in a while his editor would rejected a poem of his as perhaps off-limits, news Stanley shared with me with both disappointment and delight. At those times he reminded me of an otherwise polite boy who knew he was being a little naughty and mischievous. He caught a second wind late in life, publishing some 185 poems, humor his lifeline.

I visited him in Great Neck every few months, often on Sundays – my Sundays with Stanley. We went out to lunch at a diner and took walks in a nearby park near the water. Always we talked about writers and writing, about books and articles and essays, with special attention to Saul Bellow, Philip Roth and other literary heroes. We also discussed our own work. Even all these years later, I still showed him my materials, still addicted to his unstinting approval.

I’ve never had a talent for friendship, but luckily Stanley did. A friendship is a miracle and all miracles are to be treasured. He edited my copy, but never tried to edit my life. He remains the only person in my life I seem to have failed utterly to disappoint.

Toward the end, as he sensed his life coming to a close, he refused to let me see him, no matter how much I asked. “I have to confront this on my own,” he explained. Still, he welcomed my phone calls and always asked me for news both personal and professional. “So tell me about your latest successes,” he would say, and give me the floor. Years back I wrote a novel he had read that remained unpublished, yet he kept asking me, “Did someone accept your book?”

Eventually he would get around to telling me about his health. He always kept his accounts matter-of-fact, almost telegraphic. He took this test and that medication and the physician gave him the following prognosis. He conveyed such details with a scholarly detachment, ever the reporter, casting a cool clinical eye on his own mortality, perhaps the better to mask any apprehensions. “I’m terminal,” he told me once. “There will be pain. That will be it.”

Never once did he complain, nor seek sympathy, much less pity. That was just never his style. If his spirits sank, he never really let on. “It’s a long haul and I’m getting tired of it,” he admitted in an unwavering voice. “I’m tempted to close my eyes and let it be. The sooner the better.” The last time we spoke, he wished me all the best. He said it almost officially, as if he already knew it would be the last time we spoke. I had run out of jokes and he had run out of laughter.

Bob Brody, an executive and essayist in New York City, contributes to many publications, including The New York Times and The Wall Street Journal. He blogs at letterstomykids.org.

Read more reflections on Stanley Siegelman’s life and work from his editor Daniel Treiman here. Read his writings for the Forward here.