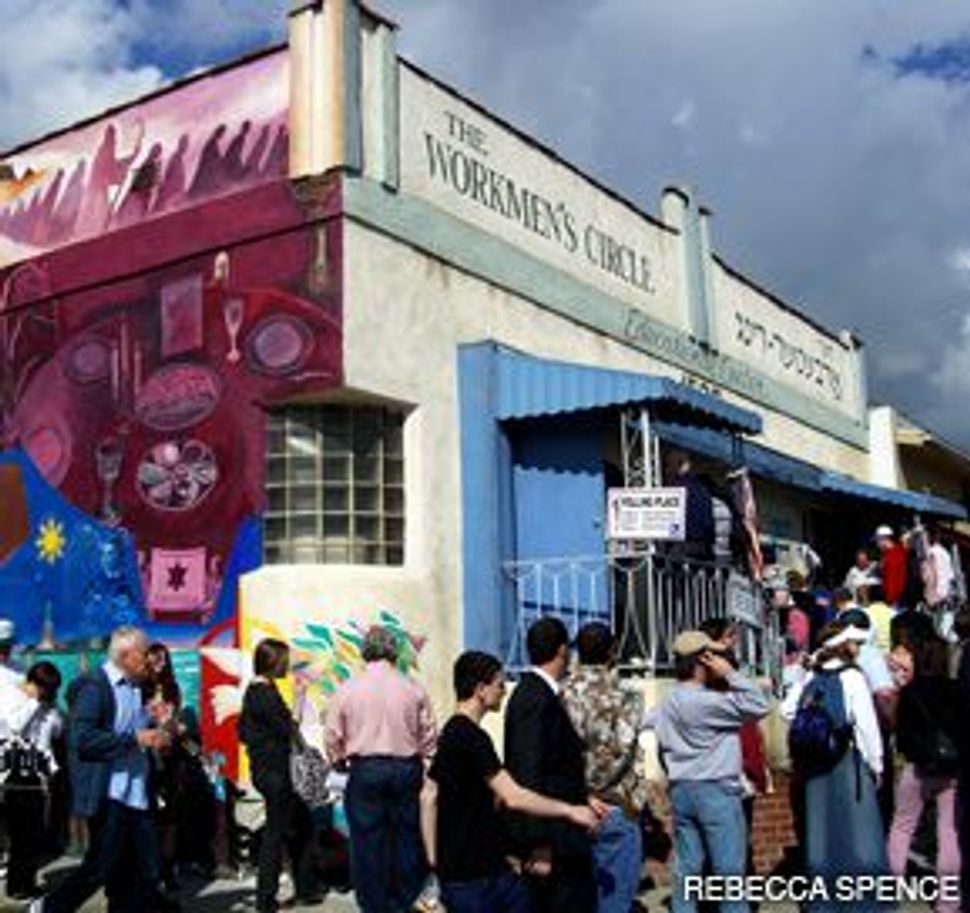 POLLING PLACE: At the Workmen?s Circle building in Los Angeles the lines to vote were long.

The Jewish support for Barack Obama’s historic election showed that despite lengthy and expensive efforts by Republicans, Jews remained a solid Democratic constituency, willing to vote in record numbers for a candidate who had to earn their backing. 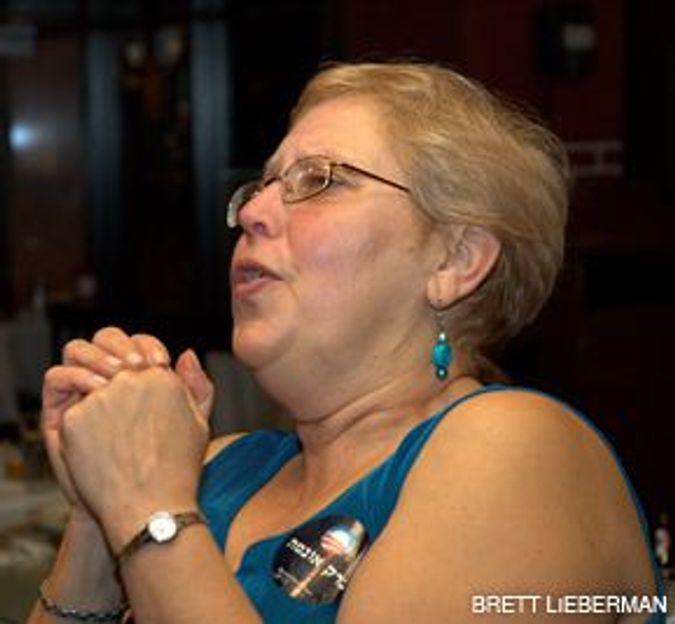 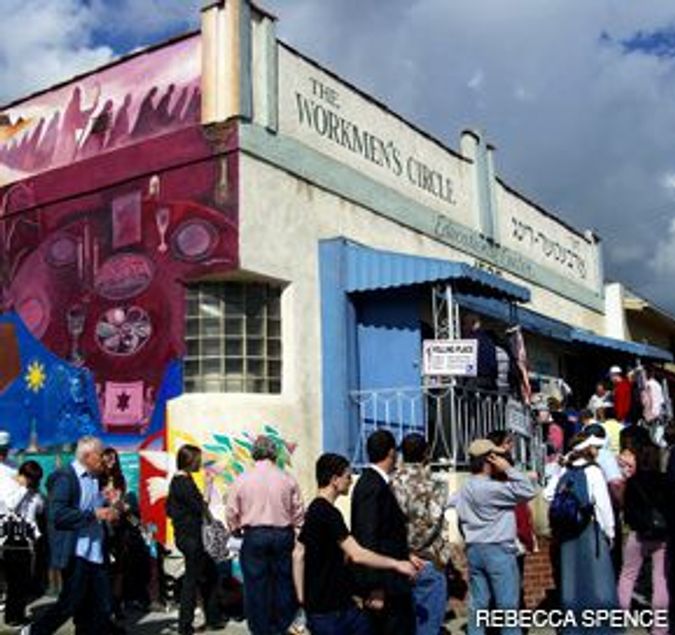 POLLING PLACE: At the Workmen?s Circle building in Los Angeles the lines to vote were long.

Initial exit polls indicated that around 78% of Jews voted for Obama for president, higher than the proportion of the Jewish vote won in 2004 by the Democratic nominee, Senator John Kerry, and close to the share captured by Senator Al Gore in 2000. No other demographic group — except African Americans — gave the first black president such overwhelming support.

This level of acclamation was not a given. Obama’s support in the Jewish community last spring and summer hovered at around 60%, in the face of Democratic rival Senator Hillary Rodham Clinton’s popularity in the community and serious questions about Obama’s foreign policy views and personal associations.

Observers say the shift in Jewish attitudes could be credited to a number of factors, including concern about the economy and deep discomfort with Alaska Governor Sarah Palin as the Republican vice presidential nominee. But it also was measurably helped by a concerted effort by grass-roots organizations, national Democratic groups and the Obama campaign’s effort to court a small constituency that has long played an outsized role in American politics.

“The Democratic operation in the Jewish community was more extensive than I’ve seen in 35 years,” said Ira Forman, executive director of the National Jewish Democratic Council.

The NJDC’s efforts — which included 350,000 pieces of mail to Jewish homes — were aided by such independent groups as JewsVote.org, the Great Schlep and the relatively new lobbying group J Street. But those efforts were up against a vastly better-funded attempt by the Republican Jewish Coalition to cast doubt upon Obama’s attitudes toward Israel and the Arab world, and upon his relations to controversial figures at home and abroad.

The RJC spent about $2 million in a national campaign of advertisements on television and in Jewish publications in print and online, accompanied by mailings and speaking tours. Matt Brooks, the RJC’s executive director, defended the expenditures by saying, “We stood tall in the face of a major tsunami.”

Brooks argued that Obama made major gains among Hispanics, Asians, Catholics and other ethnic and religious voters, compared with how Kerry performed four years ago — gains that exceeded those he made among Jewish voters. “What the numbers continue to show is that Barack Obama continues to underperform among Jewish voters relative to the general electorate,” Brooks said.

And while the RJC ads drew sustained criticism, Brooks said that the organization was successful in driving the agenda of the national Jewish conversation.

The other reason cited for Jewish voters’ return to the Democratic fold was the conduct of the presidential campaigns. Senator John McCain’s campaign waited until deep into the autumn to assign a high-level staffer as a liaison to the Jewish community, relying instead on such popular surrogates as Senator Joe Lieberman to make the case for the Republican nominee.

By contrast, the Obama campaign had a full-time coordinator for the Jewish vote for the past year, aided by staffers and volunteers on the ground in such key states as Pennsylvania and Florida, and later in Virginia and Ohio. Dan Shapiro, an outside adviser on Middle East affairs, joined the campaign in August as a senior policy adviser in charge of all these outreach efforts.

In the end, though, it may be impossible to ignore the pull of identity politics. The Jewish alliance with the Democratic Party, largely begun in the New Deal days of Franklin Delano Roosevelt’s presidency, defies the conventional wisdom that voters with greater wealth and status tend to side with Republicans. Instead, opinion polls suggest that Jews still identify with Democratic attitudes toward tax policy, health care reform, abortion and church-state issues. “As we became more moneyed, this old commitment stayed,” Democratic consultant Steve Rabinowitz noted.

Interviews with young Jews partying on election night indicated that for some, the Obama candidacy also offered a chance to rekindle the black-Jewish alliance of the civil rights movement. “I think the appeal of Obama to Jewish voters is the hope that he can mend the rift between the black community and the Jewish community that’s been going on for more than 40 years,” said David Sax, 29, of Brooklyn, as he celebrated at Mansion, a club on West 28th Street in Manhattan.

“It’s the first time that Jews have seen a black leader the way they saw Martin Luther King,” Sax added.

In Chicago on election night, amid the multitudes gathered in Grant Park to witness Obama’s acceptance speech, were a number of Jewish leaders who had backed the young senator from Illinois before he became a worldwide, household name, including Alan Solow, Penny Pritzker and others. Among them was Rabbi Sam Gordon of Sukkat Shalom, a progressive synagogue in Wilmette, Ill., who was a co-founder of Rabbis for Obama.

After the speech, Gordon stood with others involved in the campaign and wondered if there was a Jewish blessing for a new president. Mazel tovs were exchanged, but somehow that did not fully capture the historic moment. Without any formality, Gordon and several others then spontaneously said Shehechiyanu, thanking God for letting them see this day.

With reporting by Lana Gersten in New York and Nathan Guttman in Chicago.