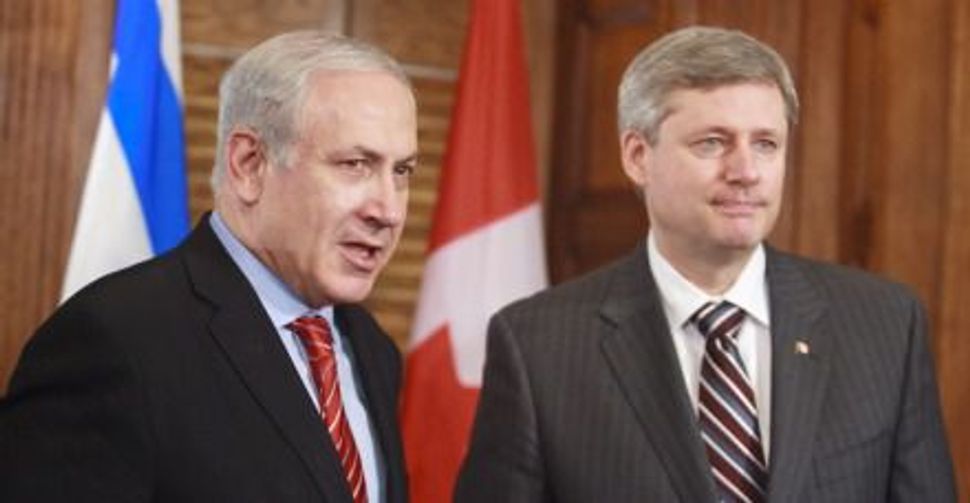 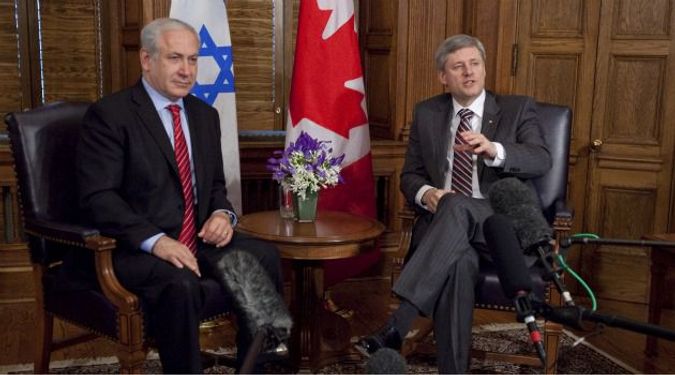 Canada’s foreign affairs minister, John Baird, reacted swiftly last month when word reached him that the Palestinian Authority’s envoy to Ottawa had promoted a YouTube video in which a Palestinian girl urged sympathizers to “destroy the Jews.” Linda Sobeh Ali’s re-Tweet of the video, Baird made clear, had ended her credibility as a diplomat in Canada.

Canadian reaction did not shift when subsequent reporting clarified that the offensive English subtitle had mistranslated the girl, who actually called on sympathizers to support a war devoted to “destroying oppression and kill[ing] the soul of Zionism.” Ali herself apologized profusely, saying she had re-Tweeted the poem without actually viewing the video herself. But the P.A. was forced to call her home.

It was just the latest example of Canada’s staunch pro-Israel stand under Prime Minister Stephen Harper. The flap followed on Canada’s strong opposition to the Palestinian statehood initiative at the United Nations in September, further underlining Ottawa’s reputation as the most pro-Israeli of Western governments.

Harper’s stands have yielded a notable political result. In elections last May, Canada’s Jewish community gave Harper’s Conservative Party a majority of its vote for the first time. It is the kind of shift American Jewish conservatives have long dreamed of, fruitlessly so far, for the Republican Party.

“It has to do with the policies of the Conservative government,” said Ed Morgan, a law professor at the University of Toronto and board member of the Centre for Israel and Jewish Affairs. “If those stay pro-Israel, a lot of Jewish votes will probably continue to swing their way.”

“It’s not because the Conservatives love the Jews,” said Toronto lawyer Sam Goldstein, who was defeated when he ran as a Conservative for Parliament in 2006. “They support Israel because it’s the right thing to do.” He says Harper views Israel as a country that shares Canada’s commitment to Western democratic values.

Canada doesn’t have anywhere near the clout of the United States in the Middle East, even with the waning of American influence in the region. Yet Harper has had a much chummier relationship with Prime Minister Benjamin Netanyahu than President Obama has had.

In May, at a meeting in France of the G8 leaders — a group encompassing the democratic world’s largest economies, plus Russia — Harper single-handedly blocked the final communiqué from declaring that Israeli-Palestinian peace talks should be based on the prewar 1967 borders, plus negotiated land swaps. Obama had enunciated that position a few days earlier as part of his effort to relaunch peace talks, and the European leaders at the G8 had wanted to back his call.

Under Harper, Canada was also the first country to announce that it would boycott Durban III, warning that the anti-racism conference held in September at the U.N. in New York would again turn into a platform to single out and demonize Israel. The United States and several other countries later did the same. But Canadian Immigration Minister Jason Kenney went further and attended the philo-Semitic counter-conference held in New York parallel to the U.N. event.

The Conservative Party’s breakthrough in winning a majority of the Canadian Jewish vote last May is in part a product of such moves. Harper’s Conservatives had tried for most of the past decade to wean Jewish voters from their historic allegiance to the centrist Liberal Party, which in many ways paralleled American Jews’ fealty to the Democratic Party. Data released from exit polls by the Ipsos Reid polling firm revealed that while the Conservatives’ popular vote rose only 2% nationally from the 2008 to the 2011 elections, among Jews their support climbed to 57% from 32%.

“I understood there was a gradual movement among Jews toward the Conservatives in recent years, but these results show there’s been a quantum leap,” said Nelson Wiseman, associate professor of political science at the University of Toronto.

In the May ballot, Conservative candidates ousted long-serving Liberal legislators from two seats in Toronto and one in Winnipeg, representing districts with substantial Jewish populations. In Montreal, Irwin Cotler, the former Liberal justice minister — himself a prominent pro-Israel advocate — retained his historically Liberal seat but failed to win a majority of the Jewish vote.

Jack Siegel, president of a local Toronto Liberal Party association, says the Liberals can regain the Jewish vote. But he admitted, “We can’t out-Zionist the Conservatives. I can’t fault a single thing in the Conservative position vis-à-vis Israel.”

Jews, Siegel observed, “until recently have been more comfortable voting on the issues that other Canadians vote on. I think that pattern will re-emerge, especially if we run a better campaign than our last one.”

Harper has also made a number of high-profile Jewish appointments to public office that play well in the community. In 2008–09, he appointed two Toronto Jews and one from Montreal to Canada’s nonelected upper chamber.

Following last May’s election, he named a rookie Jewish legislator, Toronto’s Joe Oliver, to the senior Cabinet post of natural resources minister. Oliver has emerged as the chief defender of the proposed Keystone XL pipeline for the transmission of Alberta’s tar sands-derived oil to Texas — a project that has provoked demonstrations in Washington and Ottawa. Oliver’s appointment is expected to reinforce the Cabinet’s already pronounced pro-Israel tilt.

For the actual implementation of his foreign policy, Harper relies on Montreal-born lawyer Morris Rosenberg, whom he appointed last year as deputy minister of foreign affairs.

Rosenberg, although an experienced civil servant, was the first official without diplomatic experience ever to be named to the post. The Montreal-born, Harvard-trained lawyer has been responsible for implementing Harper’s strongly pro-Israel policy in the face of a foreign service that favors a more even-handed approach to the Middle East conflict.

Harper has also tapped Jews for other nonpartisan posts. In October, he named Justice Michael Moldaver to the Supreme Court of Canada. Moldaver became the fourth Jewish judge now serving on the nine-judge panel, and the second named by Harper. Until 1970, the high court had never had a Jewish justice.

The selection of Moldaver, following Harper’s previous appointment of Justice Marshall Rothstein, has added two conservative jurists to the bench. This is expected to make the high court more receptive to Harper’s right-of-center policies on such matters as tougher prison sentences and limitations on collective bargaining.