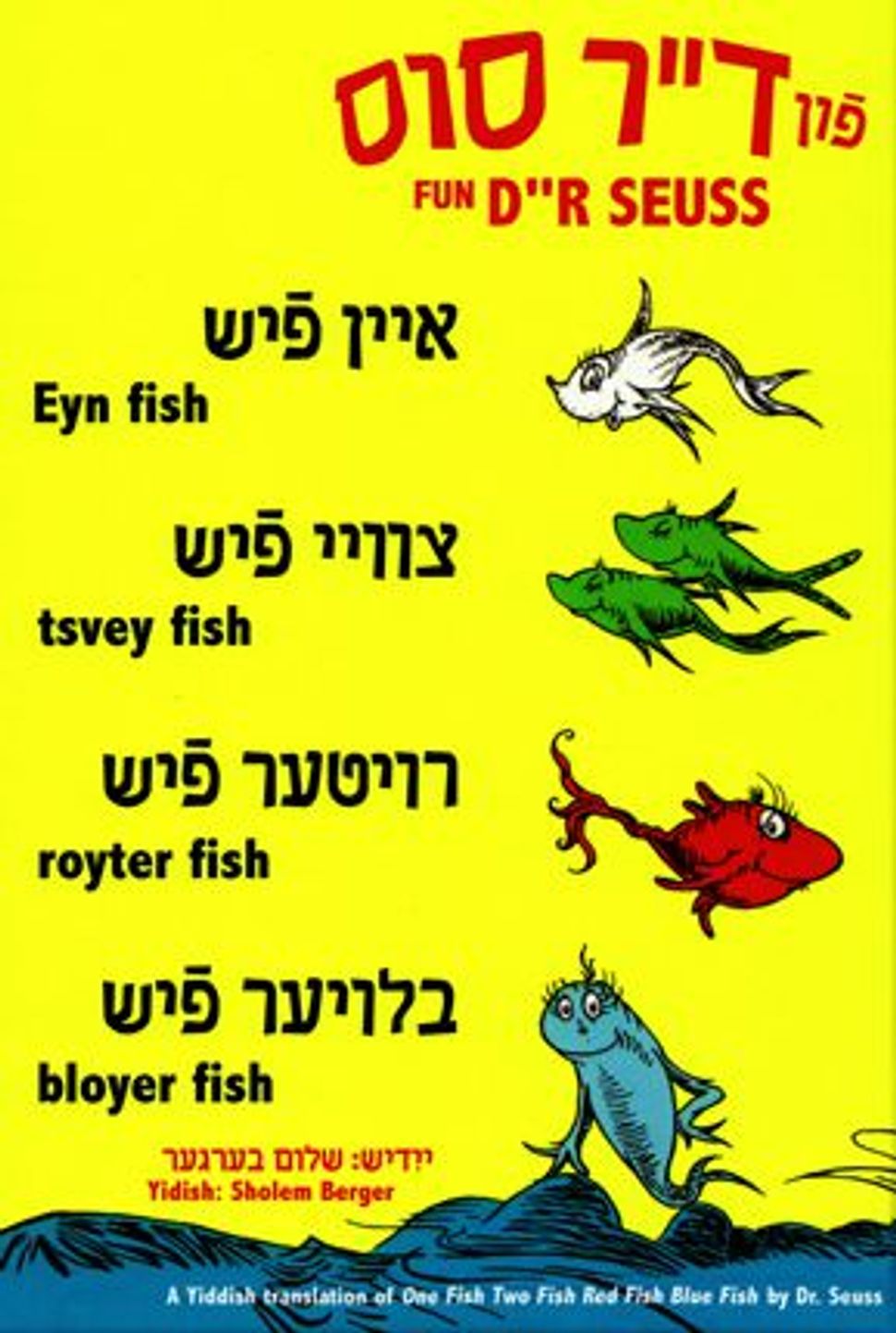 Let’s say you’re raising your children in Yiddish and you want to buy them some books. What do you do? If you walk into the children’s section of any bookstore, you’ll be deluged with a huge number of engaging, beautifully illustrated books, from board books to chapter books to beautifully rendered pop-ups. But none of these books is written in Yiddish — right? 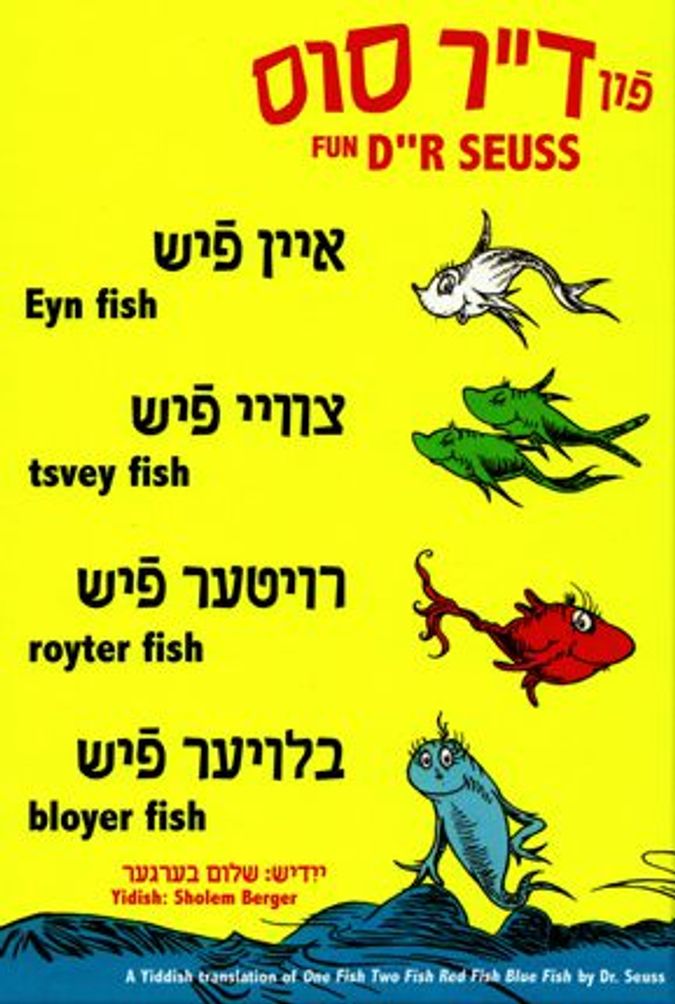 Yiddish — the ever-dying language — produced some wonderful reading material for children, including the beautifully illustrated “Yingl Tsingl Khvat” by Mani Leib (originally published in 1918 in Kiev, reissued in the United States in 1986) and Chaver-Paver’s raucously fun stories of the depression dog “Labtsik” (1935), among many, many others. Needless to say, the Yiddish children’s book market has not kept up with the times. But over the past few years, it has begun to show new life. In recent years, new editions of such classics as “The Cat in the Hat,” “Curious George” and “Winnie the Pooh” have all appeared in Yiddish. While these offerings are small potatoes compared with what’s available in English, they are nonetheless an attempt to update Yiddish children’s literature, which hasn’t seen significant action since the 1950s.

It may come as a surprise that there are some people outside of the Haredi world who are raising their children in Yiddish. The relatively small number of non-Haredi Jews who speak Yiddish comprises mostly academics and other Yiddish enthusiasts who love the language and feel that it adds a major cultural component to their lives. This Yiddish obsession is so powerful that a number of them have made the decision to raise their children in the language. These children, while not read to exclusively in Yiddish, are being guided through the literature by parents whose knowledge of it is often nonpareil.

As a result, parents such as Kenneth Moss, professor of Jewish history at Johns Hopkins University, and his wife, Anne, have made a concerted effort to expose their children to Yiddish stories. There is a division of labor: Only Ken reads in Yiddish. But he is serious about educating his children in the language, and reads to them both the classics of Yiddish children’s literature and the newer translations.

Another professorial couple at Johns Hopkins, Marc and Brukhe Caplan (he, literature; she, Yiddish language), are also raising their kids in Yiddish. The Caplan’s 4-year-old, Zippy, enjoys hearing stories in Yiddish so much, she demanded that her baby sitter (who happened to be one of Brukhe’s students) simultaneously translate the English stories she was reading her into Yiddish. Moreover, Zippy helped the baby sitter — a second-year Yiddish student — when she stumbled on a word.

Simultaneous translation while reading is a fact of life for the kinderlekh of today. While older Yiddish books often tell terrific stories, they are usually dusty editions from the 1920s and ’30s, and often pale in comparison with the new, brightly illustrated books of today. As a result, current children’s literature is often translated on the fly into Yiddish.

But this is nothing new. Dan Opatoshu, executive director of Yiddishkayt Los Angeles and the grandson of famed Yiddish writer Joseph Opatoshu, recalls that he loved hearing his grandparents read his favorite comic books and stories in Yiddish. To hear Donald Duck, Little Lulu and Freddy the Pig speak Yiddish was a unique experience and one that, no doubt, made the characters a little bit more haimish. But Opatoshu’s grandparents also read him Yiddish originals, like “Labtsik,” through whose eyes we see Brooklyn’s Brownsville section during the Depression era, and selections from Yehoash’s Yiddish translation of the Bible. All this provided him with a life-long love of Yiddish.

So what is a young reader (or read-to) of Yiddish to do? Help has arrived in the person of Zackary Sholem Berger, a doctor by trade and a Yiddishist by desire (and also a Forward contributor), who has provided Yiddish parents with high-quality translations of such classics as “Curious George,” “The Cat in the Hat” and Dr. Suess’s “One Fish, Two Fish, Red Fish, Blue Fish” (where he tastefully avoided the “gefilte fish” pun). These stories are already familiar to children and help to legitimize Yiddish as a normal language, instead of as language with an inferiority complex.

Seemingly a novelty, these translations can be considered excellent jumping-off points for the Yiddish-curious. Buy your kid “Der Kats der Payats” and, who knows, maybe it will spark dos pintele yid. And if it does, there’s more. “My First Yiddish Word Book,” a new illustrated Yiddish dictionary for children by Joni Kibort Sussman, has just been published. With this, kids can learn hundreds of Yiddish words. If their interest is further piqued, they can move on to Frida Grapa-Cielak’s “ARELE.” A new three-volume set of Yiddish instruction for children, “ARELE” would work nicely in an elementary-school setting. But really, what Jewish elementary school has the guts to take on a language representing 1,000 years of Jewish life?

None of these books, interesting and well rendered as they all are, has been able to break into what is currently the largest Yiddish children’s market: the Haredi world. Sholem Berger’s new translations won’t be found on the shelves of bookstores in Brooklyn’s Williamsburg, for the simple reason that they are not kosher for this audience. What is kosher comprises dozens of new Yiddish books that regale readers with tales of Jewish heroes, synopses of the weekly Torah portions, and quasi-instructional booklets that contain pleasant illustrations and offer young readers didactic information, such as what types of work are not permitted on the Sabbath, all in Yiddish. There are also Yiddish coloring books and workbooks — all of which accommodate the lifestyle of the Haredi community.

While it is unlikely that a Satmar child in a Kiryas Joel heder will be caught with a copy of “Kats der Payats” under his arbo-kanfes, Yiddishly engaged parents will probably use these Haredi publications to teach their children about an important part of the Yiddish world. And with the current crop of writers and translators continuing to put out fresh material, and a new generation of leading youth organizations such as Yugntruf, it may be that we will see this interesting trickle of Yiddish books turn into a stream.